Twisting the UP mandate: How some are allergic to Truth 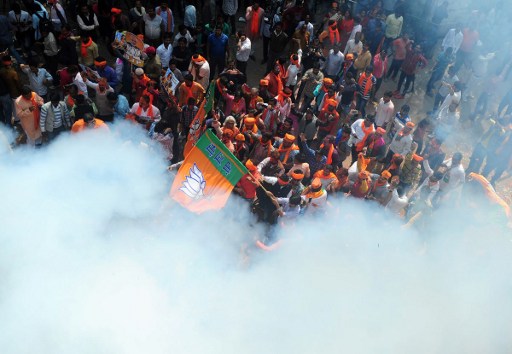 Supporters of the Bharatiya Janata Party (BJP) celebrate outside the party office as state assembly votes are counted in Lucknow on March 11, 2017. PIC/AFP.

I am waiting for Amartya Sen to solemnly proclaim this in his next interview. He has already said this about the 31% national vote that the BJP got in 2013, and since he has a Nobel Prize in Economics, obviously he knows more about politics than you and me. The fact that there is a rule known as ‘first-past-the-post’ seems to have escaped the celebrated Harvard economist. It may well be that his #DeepState connections (possibly through his Rothschild in-laws) has caused momentary amnesia.

Amartya Sen is only one of a small army of clever people who have made interesting observations about India’s elections. Another is one Steve Hanke, apparently a retired professor of economics at Johns Hopkins University (conveniently close to the epicenter of the #DeepState, Washington, DC). Here’s Steve’s magnum opus tweet, verbatim:

#Modi steals their money. Then Indians vote BJP. Go figure. Must be something in the water.

Amazing, Steve, how you managed to throw in racism, bigotry, ignorance, condescension, partronization, white-man’s-burden and god knows what else into a mere 140 words. Par for the course, though: economists think they are experts in everything (sadly, untrue). Witness how Amartya Sen (I prefer to think of him as Sen-Rothschild) pontificates on history. Troublingly, Steve’s with the Cato Institute, a libertarian think tank: so it’s probably close to what President Trump’s crew, for instance Steve Bannon, may be thinking.

A third ‘eminent’ person to comment was Omar Abdullah, former CM of Jammu & Kashmir, and himself a dynast, son and grandson of earlier CMs. At least Omar has the excuse that he is a professional politician, although his grasp of logic and history may be a bit wanting. Here’s Omar’s own magnum opus, verbatim (in reference to Amit Shah’s debatable claim that UP 2017 shows Modi is the most popular leader since 1947):

Perhaps when he gets a mandate greater than Rajiv Gandhi's in 1984 we can begin to discuss this boastful claim.

Yeah, Omar, but nobody died. You forget that Rajiv was riding the tidal wave of sympathy for his assassinated mother. In the election phases in 1991 before he was killed, Rajiv’s Congress wasn’t doing that well, and it was only with the sympathy wave after his own assassination that Congress managed a decent tally (though not a majority). Whereas Namo is riding the tsunami of his personal popularity. Apples and oranges, Omar.

Then there was Siddarth Varadarajan. This editor of a fringe website named thewire.in proudly presented a piece called ‘Twelve Reasons why the fight in Uttar Pradesh is between the BSP and the SP’. Oh, I get it: he meant the fight for second and third places.

There was also a lot of lionizing of a gent named Prashant Kishore, who, I am given to understand, was the tactical genius behind both the 2014 BJP victory nationwide and, after he switched sides, the 2015 mahagadbandhan Bihar defeat for the BJP. It turns out that, like the much-lauded Nate Silver in the US, the man was a one-hit wonder.

Of course, much has been said about how Mayawati and Arvind Kejriwal were decimated as their vote-bank-calculations were upset. I don’t know about Mayawati, but we’ve not seen the last of Arvind. The #DeepState has been casting about for a Great White Hope, seeing that Rahul Gandhi isn’t quite cutting it, and they are trying out various others: Kanhaiya, Umar, Gurmehar, but their best bet is Magsaysay Arvind.

Mayawati complained about EVMs, and there is some merit to what she says: these infernal machines are easily hacked, as I have often said before, and need to be thoroughly investigated or thrown out: nobody knows what the heck happens in them, and I am pretty sure the 2009 election was stolen using widespread EVM fraud.

Having identified some of the villains of the piece – and we could go on for days if we looked at all the mainstream media goons – the pertinent question is what Modi proposes to do with the mandate.

Let us note that on the same day, 12 CRPF officers were gunned down by Communist terrorists. Now that the UP assembly elections are over, what does the ‘minority government’ (yes, still not over the hump in the Rajya Sabha) propose to do? We need a hard state against terrorists.

There is ongoing and endemic violence against Hindus by the ruling Communists in Kerala: on a daily basis, some Hindu is attacked or hacked to death. Why are the magic words “Section 356” so hard to utter, when law and order has failed so signally in this state?

Similarly, note how Trump fired US Attorney in Manhattan, Preet Bharara? Can we expect some summary ejections from the ranks of hostile babus?

And what about CNN? Their extremely Hinduphobic ‘Believer’ needs a retort. In any self-respecting country, the outfit would have been declared non grata and told to pack up and leave in 24 hours. CNN needs India more than India needs CNN, and it will teach other western media types to behave, too.

(Rajeev Srinivasan, a management professional, is a popular blogger on current affairs.)