Besides holding a public meeting, he would also call on Shivakumara Swamiji of Siddaganga Math.

By: PTI
Updated: 03 Apr 2018 06:16 PM
Bengaluru: Congress president Rahul Gandhi is all set to kick-off his fifth leg of election campaign in Karnataka from Tuesday with his itinerary including places covered recently by BJP national president Amit Shah.

Gandhi will travel to Shivamogga, Davangere, Chitradurga, Tumakuru and Ramanagar district as part of his two-day campaign in the poll-bound state. 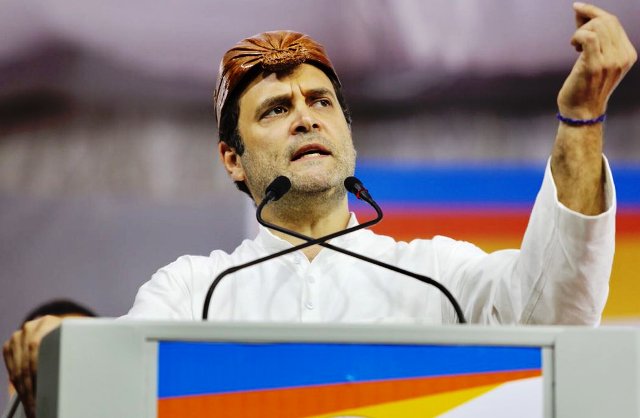 Besides holding a public meeting, he would also call on Shivakumara swamiji of Siddaganga Math, who turned 111 on Saturday, as per the programme details released by the party.

The Congress president would meet people at Bus Stand Chowk and address a public gathering in Shivamogga. He will then visit Honnalli, Harihara and Bathi towns in Davangere district.

Gandhi would also hold a public meeting at Davangere town. Tomorrow, Gandhi would visit Holalakere in Chitradurga district and address a gathering.

He would then travel to Siddaganga Math in Tumakuru district.

Gandhi would meet people in Kunigal town and would conclude another round of campaigning by addressing a public campaign at Magadi in Ramanagar district before leaving for Delhi.

Shah had toured these places on March 26 and 27.

Touring Karnataka extensively, Shah has completed four rounds of campaign in the runup to the May 12 assembly polls.

He launched the 'Karunadu Jagruti Yatre' in Shivamogga Town, held a public meeting at Gopi Circle, launched 'Mushti Dhaanya Abhiyan' (campaign for fistful of grain) in a village in Davangere and then addressed a public gathering at Chalkere in Chitradurga district.

Shah had also called on Shivakumara Swamiji and sought his blessings.

In February, the senior BJP leader had addressed a public gathering at Holalakere.

Against the backdrop of Karnataka government according religious minority tag to Lingayats ahead of the assembly polls, BJP as well the Congress launched an extensive drive to woo the Lingayats, who are numerically and politically strong in Karnataka.

Gandhi's meeting with Shivakumar Swamiji is aimed at strengthening his party's base among Lingayats.

While Shivamogga and Davangere have substantial Lingayat population, Chalkere and Holalakere in Chitradurga are dominated by tribals, Dalits and other backward castes.