By: Nikita Kochhar
Updated: 08 Nov 2017 09:34 AM
New Delhi: As opposition launches nation-wide protest on completion of one year of demonetisation, calling it a bane for Indian economy; the Government is set to celebrate anti-black money day at the same time.

Prime Minister Narendra Modi last year, banned the legal tender of Rs 500 and Rs 1000 on November 8, calling it a move to curb the problem of black money.

The senior leaders of the government will go to different parts of the country and educate people on the pros of note ban. 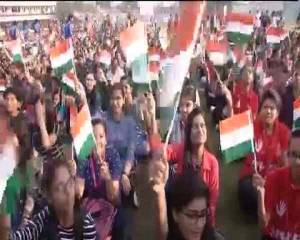 Also Union Minister Ravi Shankar Prasad would address an event based on ‘demonetisation’ at Sri Ram College of Commerce in Delhi University.

What Government claims about demonetisation:

Government has already made tall claims with regards to demonetisation. As per Government, 2 lakh shell companies got caught as an aftermath of note ban.

The government also claims at least 1 lakh 25 thousand tax payers have increased in the country.

Also, financial support being received by terrorists has also come down.

The government also claims that the banking system which was under massive debts has been benefitted the most.

The move which toppled the economy for a few days, led to long queues outside ATMs and banks, and also resulted in death of around 100 people.