Exit Poll 2019 LIVE UPDATES: As voting for both Maharashtra and Haryana Assembly Elections concluded at 6 pm on Monday, ABP News in partnership with C-Voter released the most trusted Exit Poll for the legislative elections showing the mood of the people in both the states. The Exit Polls by ABP News has been released with a sample size of 55,553 people (both in Maharashtra & Haryana). The voter turnout in Haryana and Maharashtra stood at 65% and 60.5%, respectively.

21 Oct 2019, 3:16 PM IST
21 Oct 2019, 3:16 PM IST
Soon after ABP News released the Exit Poll Results for Haryana, Bhupinder Singh Hooda claimed that Congress party will win Haryana Assembly elections will majority. However, he did not give any exact number of seats his party will win.
21 Oct 2019, 6:57 PM IST
Accodring to ABP News Exit Poll, BJP is all set for a thumping majority in Haryana Assembly polls with 70 out of the 90 member legislative assembly. Congress struggling behind with just 8 seats. Other parties will get 12 seats.
22 Oct 2019, 7:25 AM IST
According to ABP News Exit Poll, BJP and its alliance are likely to get 45 per cent vote share where as Congress-led UPA will get only 36 per cent vote share. Other parties in fray may get 19 per cent of the total vote share.
21 Oct 2019, 6:42 PM IST
In the first big revelation, ABP News Exit Poll for Maharashtra Assembly elections shows a massive mandate for BJP-led NDA as the alliance is all set to bag 210 out of 288 seats in the state. On the other hand, Congress-led UPA lags behind with only 63 seats in Maharashtra and other parties might get 15 seats.
21 Oct 2019, 6:08 PM IST
Voting ends in Maharashtra and Haryana!
21 Oct 2019, 3:16 PM IST

21 Oct 2019, 5:15 PM IST
BJP national working president JP Nadda to hold a meeting with party's General Secretaries tomorrow at BJP HQ over Maharashtra Assembly Polls and Haryana Assembly Polls. Discussions regarding party functions on birth anniversary of Sardar Patel, on 31st Oct, will also be taken up.
21 Oct 2019, 3:16 PM IST
52.70 per cent voter turnout was recorded in Haryana, while the numbers stood at 44.26% in Maharashtra till 5 pm. The voting will be concluded at 6 pm.
21 Oct 2019, 4:41 PM IST

Polling officials checking the name and documents of the voters, at a polling booth, during the #MaharashtraAssemblyElections in Mumbai pic.twitter.com/CSUPNcXGQ9

21 Oct 2019, 3:16 PM IST
Another EVM glitch was reported at polling booth number 13 at Wadala in Amulakh Amichand School at Rafi Ahmed Kidwai Marg. Voters are waiting in queue since half an hour. This is the only polling booth in the area.
21 Oct 2019, 4:34 PM IST
EVM glitches reported in some areas of Haryana and Maharashtra Several complaints of faulty EVM and VVPAT machines have been coming in from different parts of Maharashtra. The complaints are largely from districts like Ratnagiri and Bhandara. Reportedly, polling in Ratnagiri’s Dhamangaon village was stopped for nearly 2 hours due to EVM malfunctioning. Likewise in Worli, where Shiv Sena leader Aditya Thackeray is contesting there was brief stoppage of polling in one of the booths due to an EVM glitch. This was later rectified. Congress has sent over 180 complaints to the Election Commission. Officials, however, said that the complaints are exaggerated and that the glitches have been rectified soon.
21 Oct 2019, 4:37 PM IST
21 Oct 2019, 3:16 PM IST
Congress officially asked the district returning officer of Kochi to order for the official voting time at the Ernakulam assembly constituency to be extended till 8 pm. According to the official figures of the chief electoral office till 2 p.m, only 33.79 per cent of the voters could cast their votes.
21 Oct 2019, 4:15 PM IST
Haji Ibrahim Aleem Joad, a 102-year-old man in Pune cast his vote along with his family at a polling booth in Lohegaon. 'I was admitted to hospital for 4 days but today I'm here to cast my vote. I urge everyone to come forward and vote,' he said.
21 Oct 2019, 4:13 PM IST 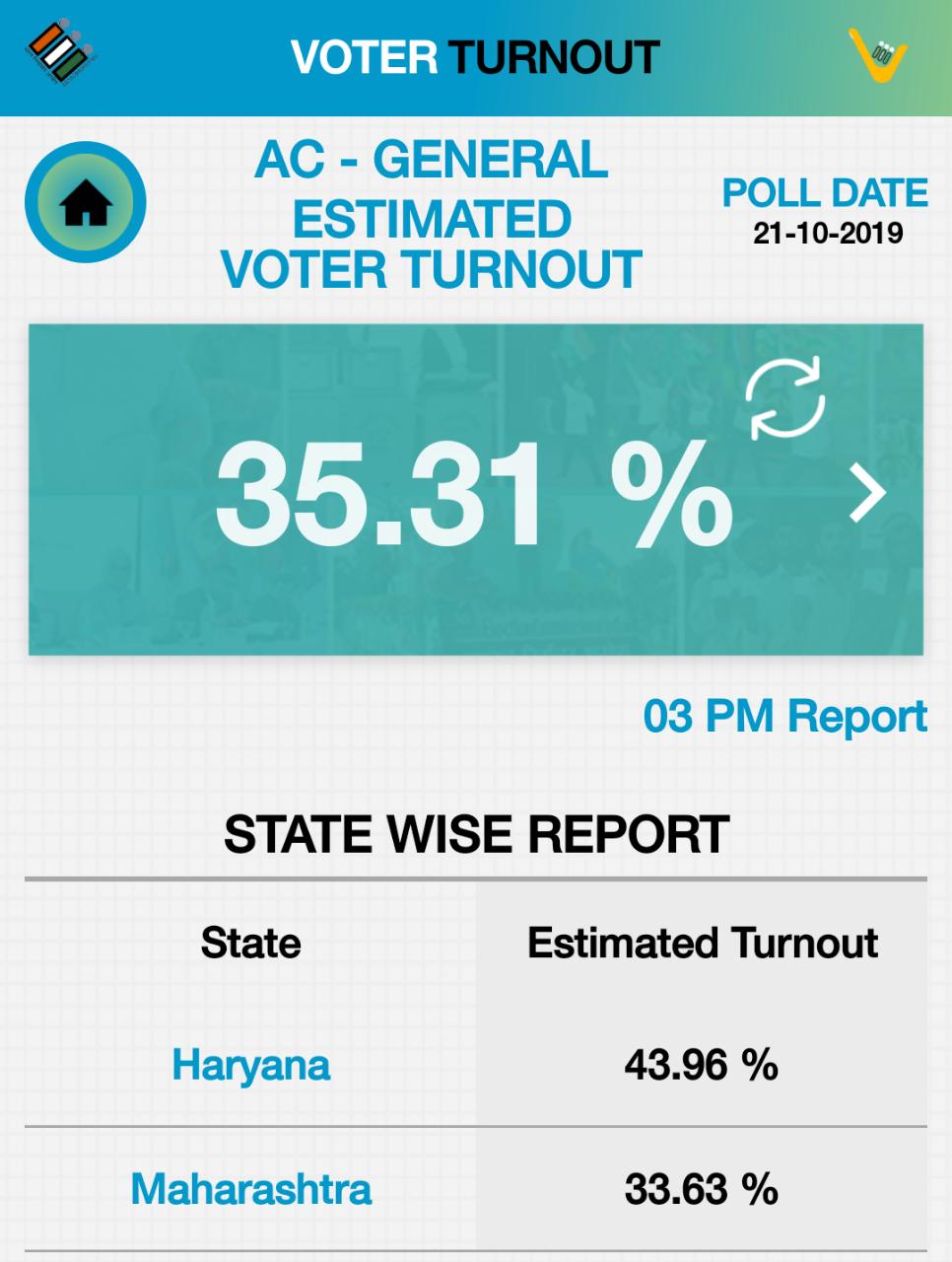 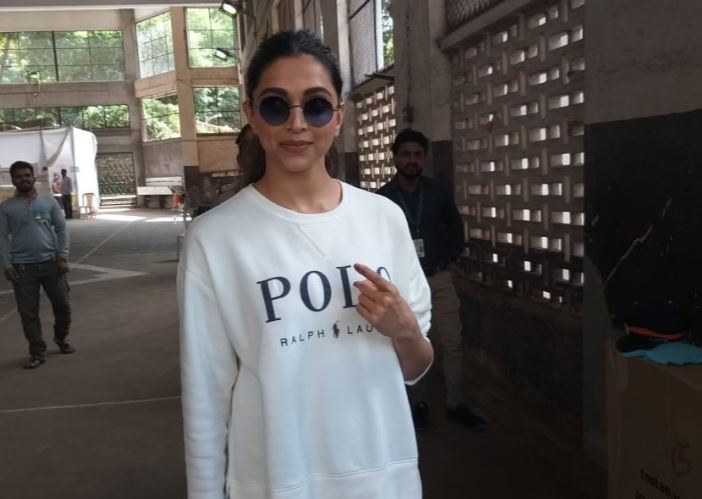 21 Oct 2019, 2:14 PM IST
Union Minister & BJP leader Dharmendra Pradhan: BJP is going to form govt in both the states, Haryana & Maharashtra. We are confident that people will continue to support Prime Minister Modi, his philosophy & his policies.
21 Oct 2019, 2:15 PM IST 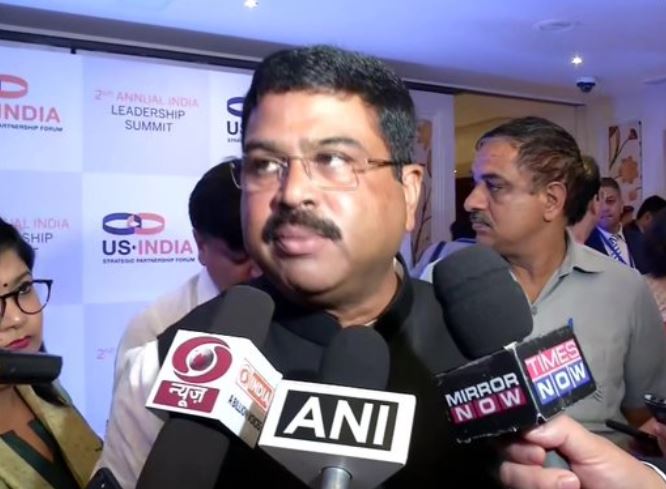 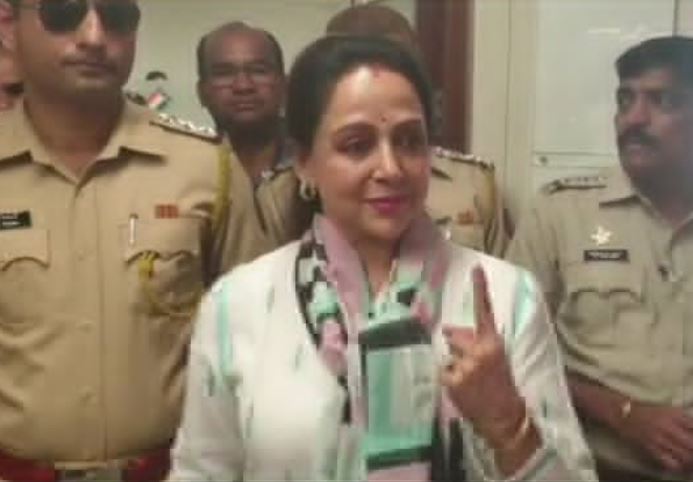 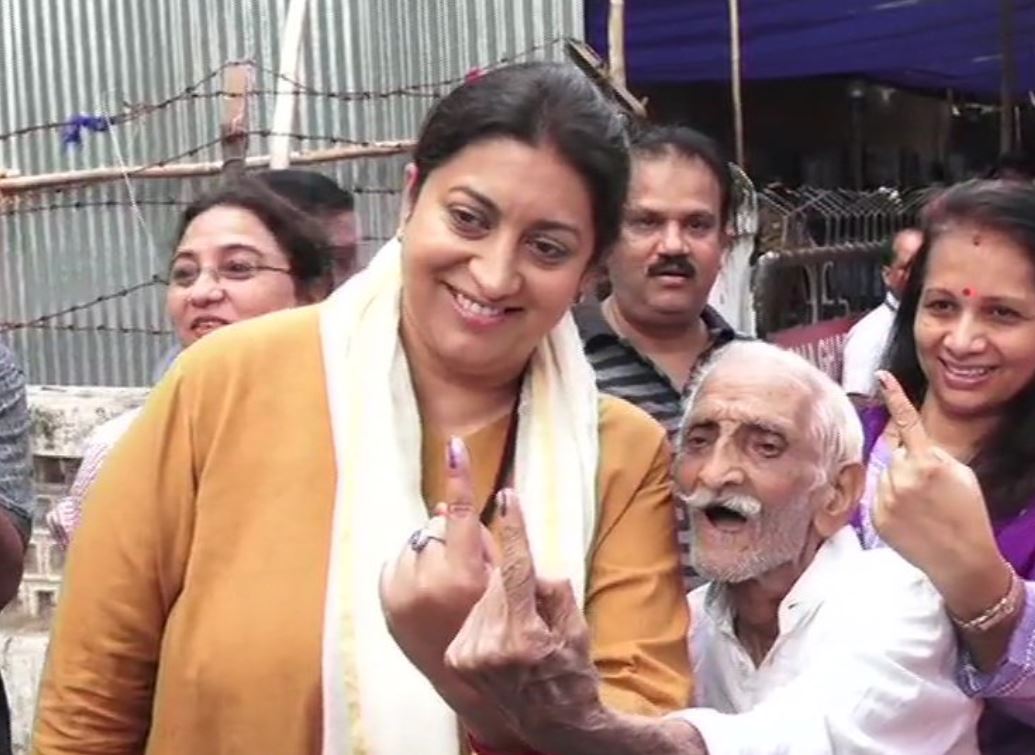 Maharashtra Polls 2019: Voting Held In Candlelight Due To No Electricity

Polling officials had candles placed at their tables to help them tally voter details properly. Padhtare said that eight polling stations have been affected due to the unavailability of electricity.... 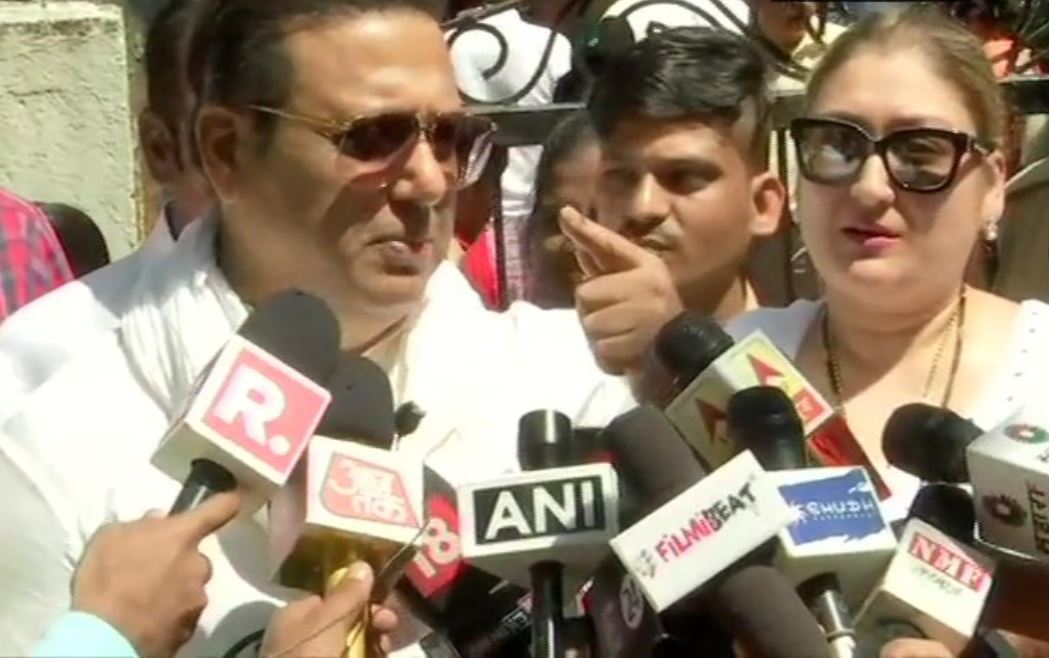 Khattar first travelled by Janshatabdi Express from Chandigarh to his hometown Karnal in Haryana and then rode a bicycle to cast his vote....

www.abplive.in
21 Oct 2019, 12:26 PM IST
Sachin Tendulkar, wife Anjali and their son Arjun after casting their vote at a polling booth in Bandra (West) 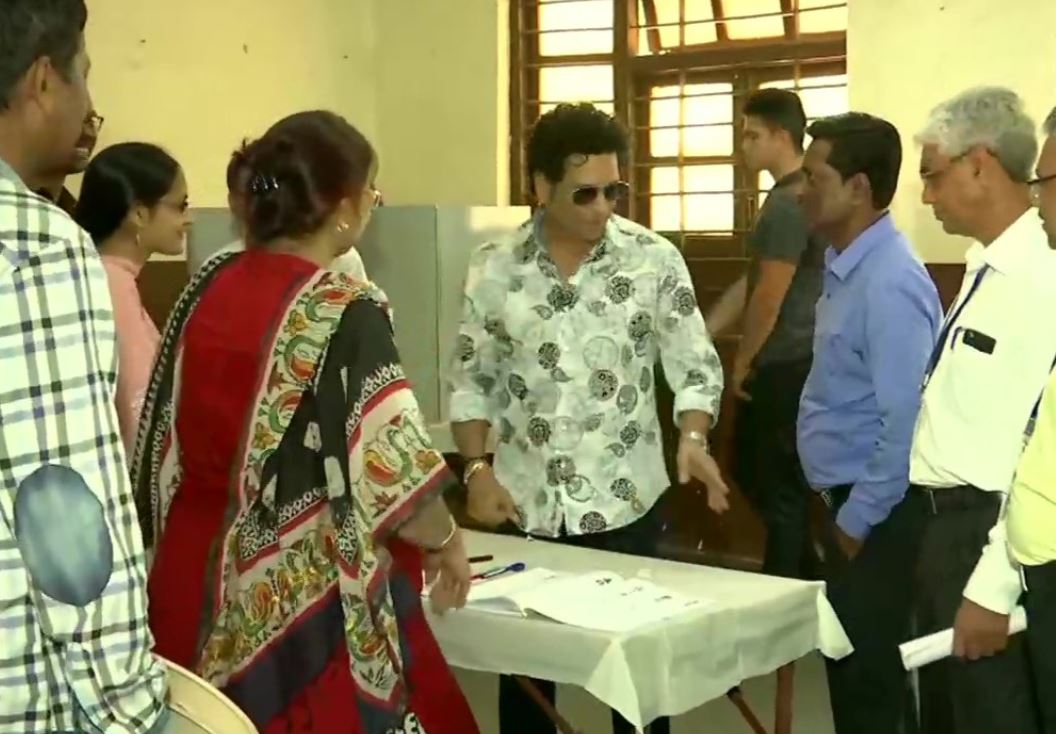 21 Oct 2019, 1:07 PM IST
Nationalist Congress Party Chief Sharad Pawar after casting his vote in Mumbai: I request everyone to come out and vote in large numbers, this is a celebration of democracy.
21 Oct 2019, 12:11 PM IST

We have voted. Have you? Do step out and vote today! This is the most powerful voice we have. This is that moment t… https://t.co/Z7yjAfSjML 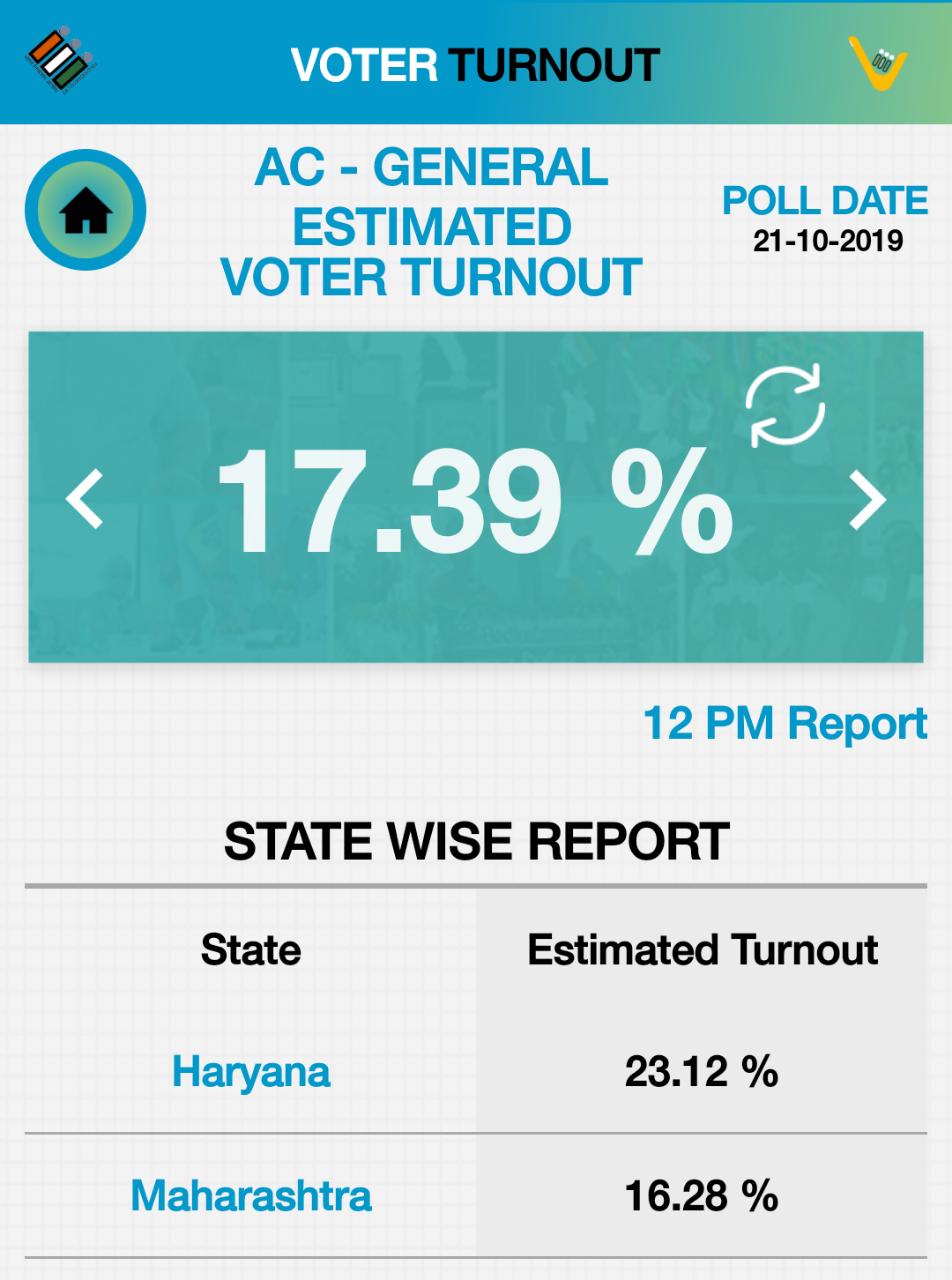 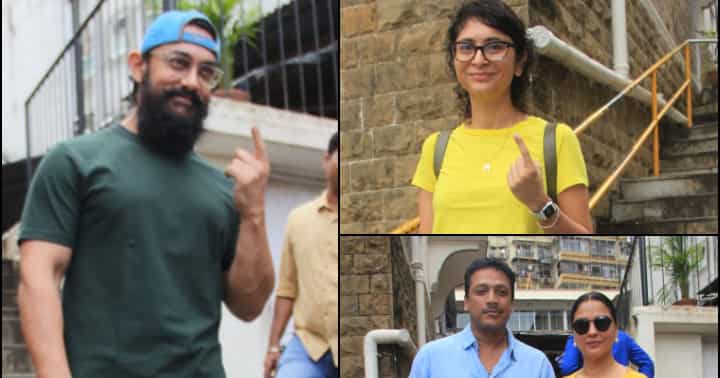 Voting for the Maharashtra Assembly Elections 2019 started on Monday (October 21) at 7am. Polling is expected to conclude at 6pm.Bollywood celebs including Aamir Khan, his wife Kirao Rao Lara Dutta, her husband Mahesh Bhupathi, and Kunal Kohli stepped out of their homes to cast their vote.... 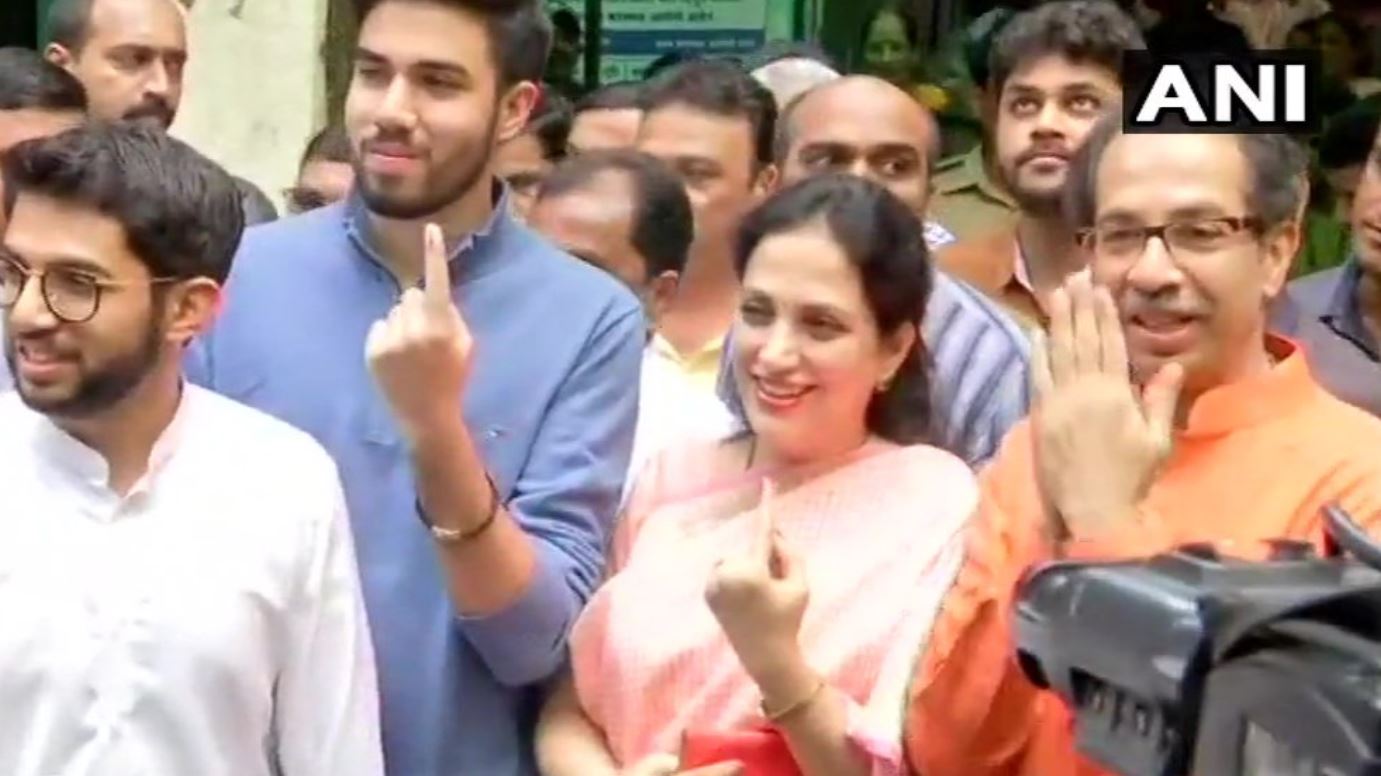 21 Oct 2019, 10:53 AM IST
Haryana CM ML Khattar after casting his vote in Karnal: Voting is underway peacefully across the state. Opposition parties including Congress have already lost and have left the battleground, their tall claims have no value. 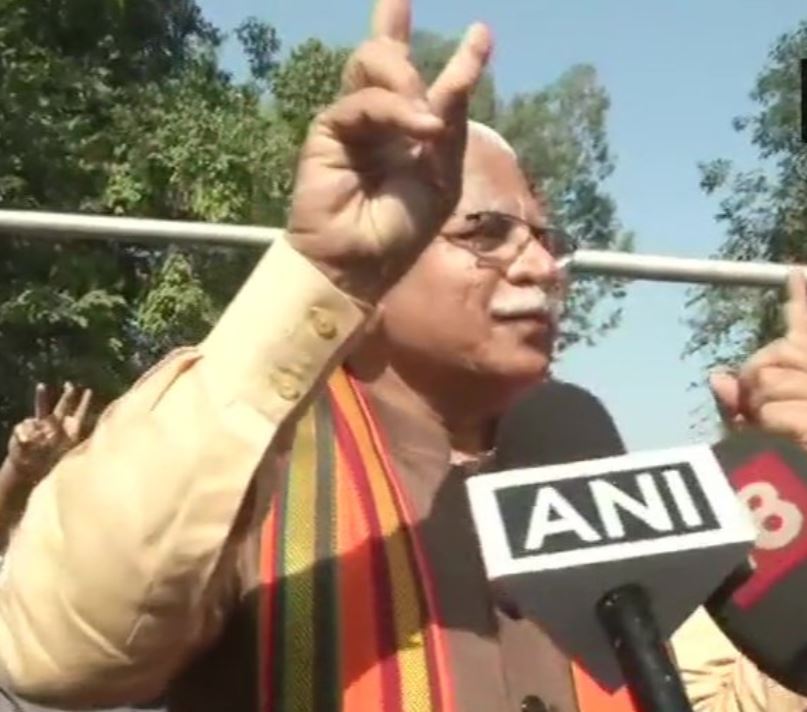 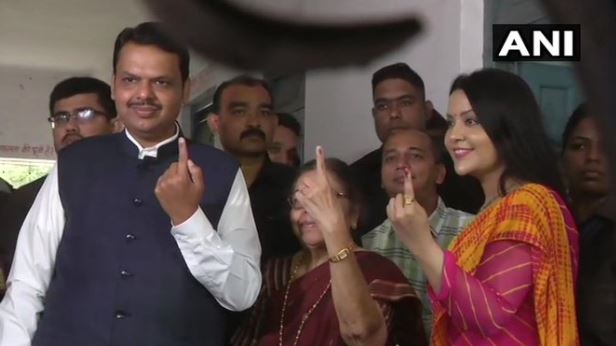 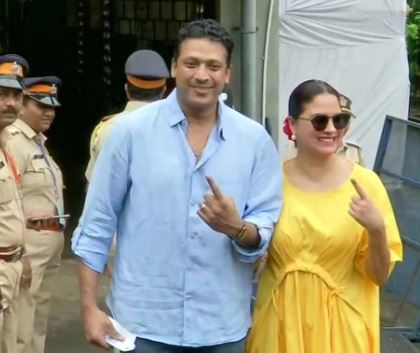 21 Oct 2019, 10:15 AM IST
Actor Aamir Khan casts his vote at a polling booth in Bandra(West), says 'I appeal to all citizens of Maharashtra to come out and vote in large numbers'.
21 Oct 2019, 9:46 AM IST
Voter turnout recorded at 4.86% till 9 am in Maharashtra and Haryana all together, according to Election Commission. 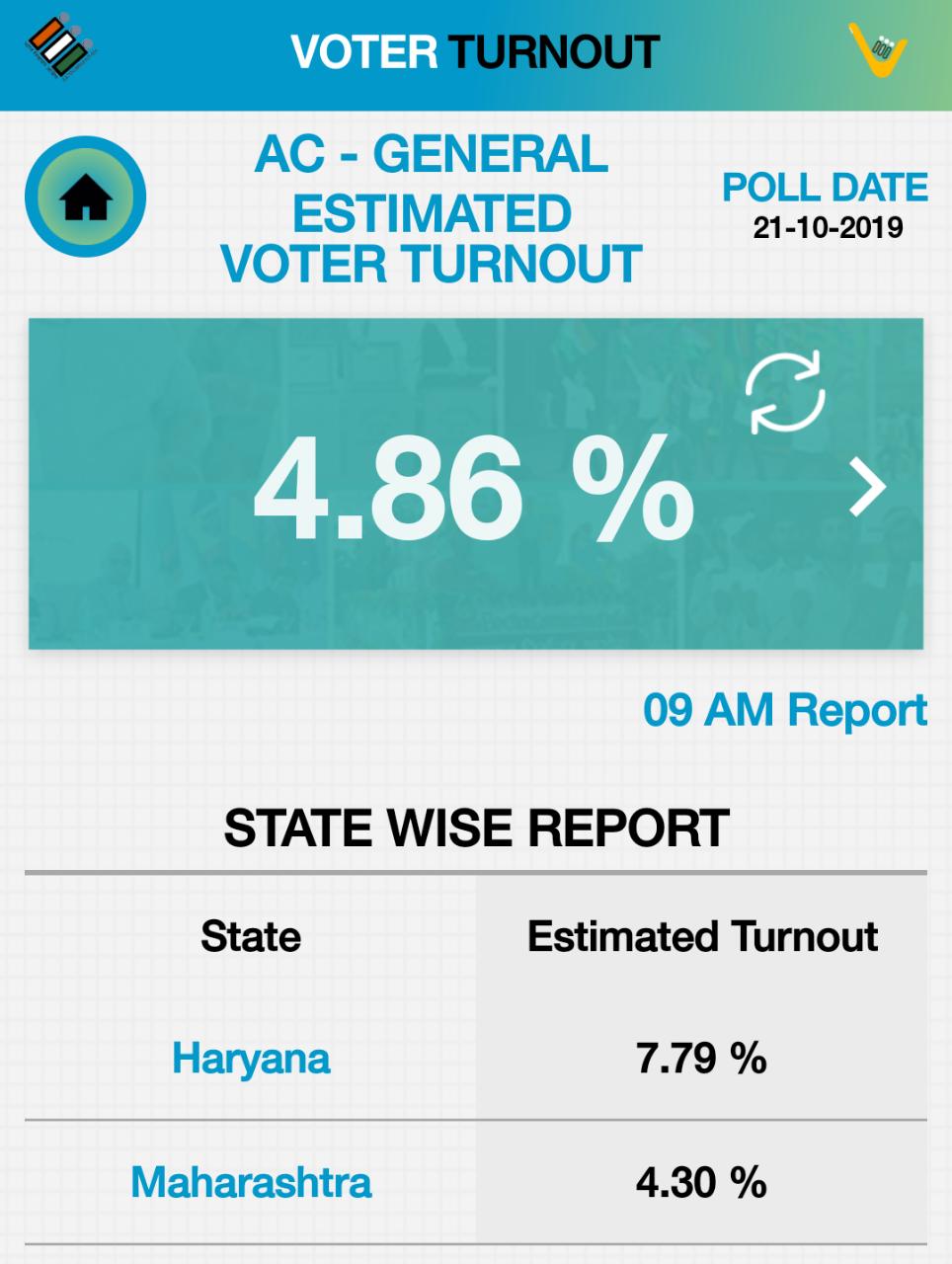 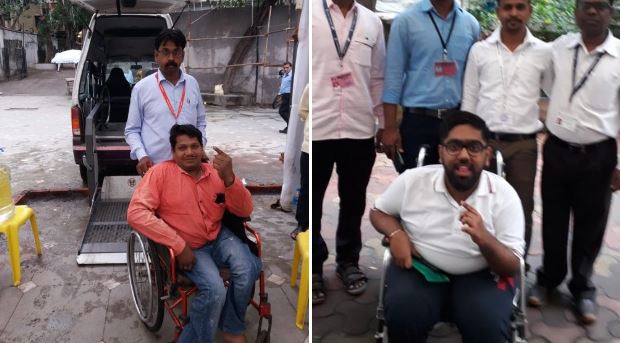 21 Oct 2019, 9:28 AM IST
Haryana Assembly Polls: Jannayak Janata Party (JJP) leader Dushyant Chautala & his family arrive on a tractor, to cast their votes at a polling booth in Sirsa. 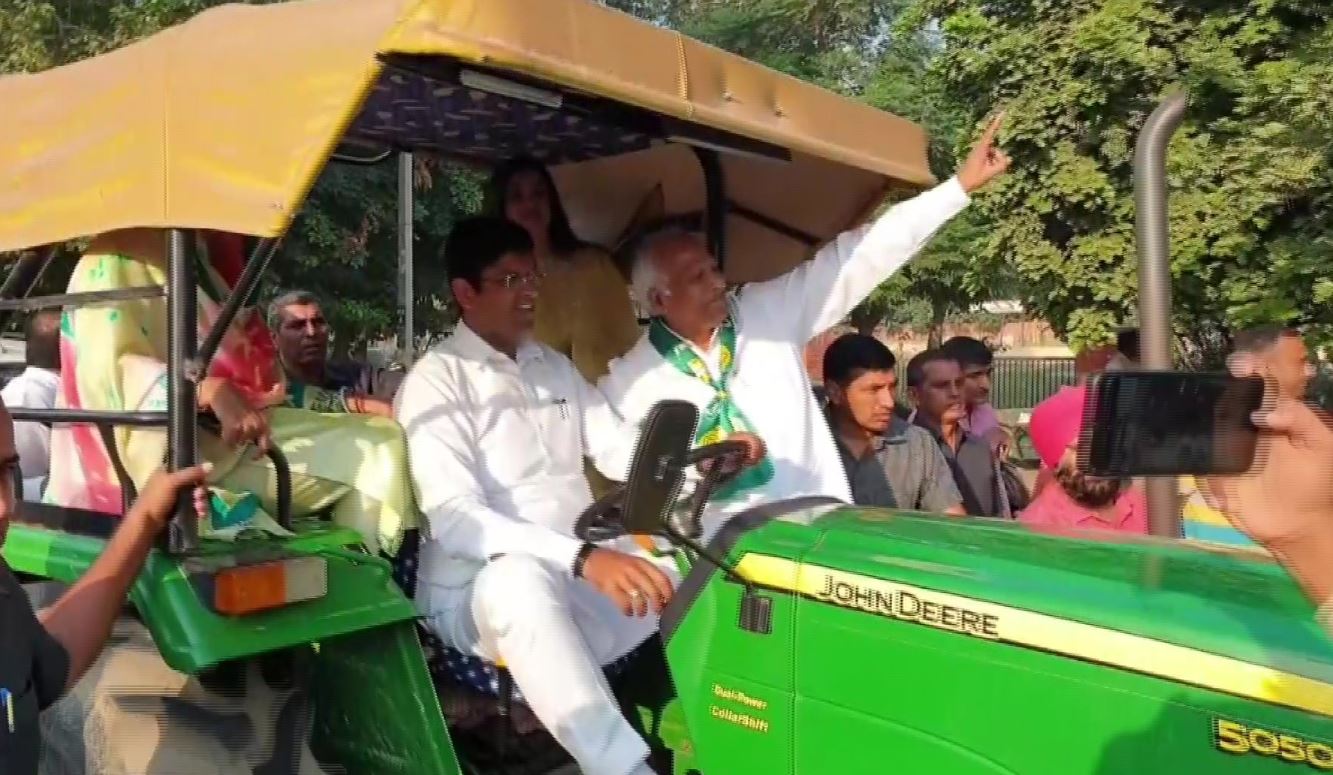 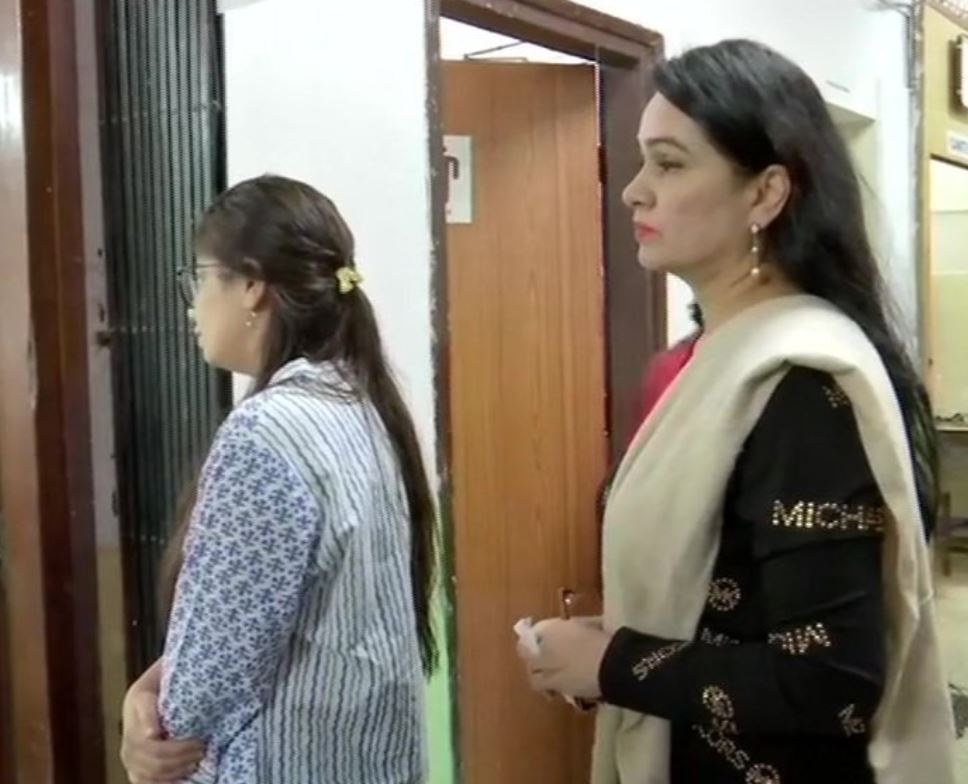 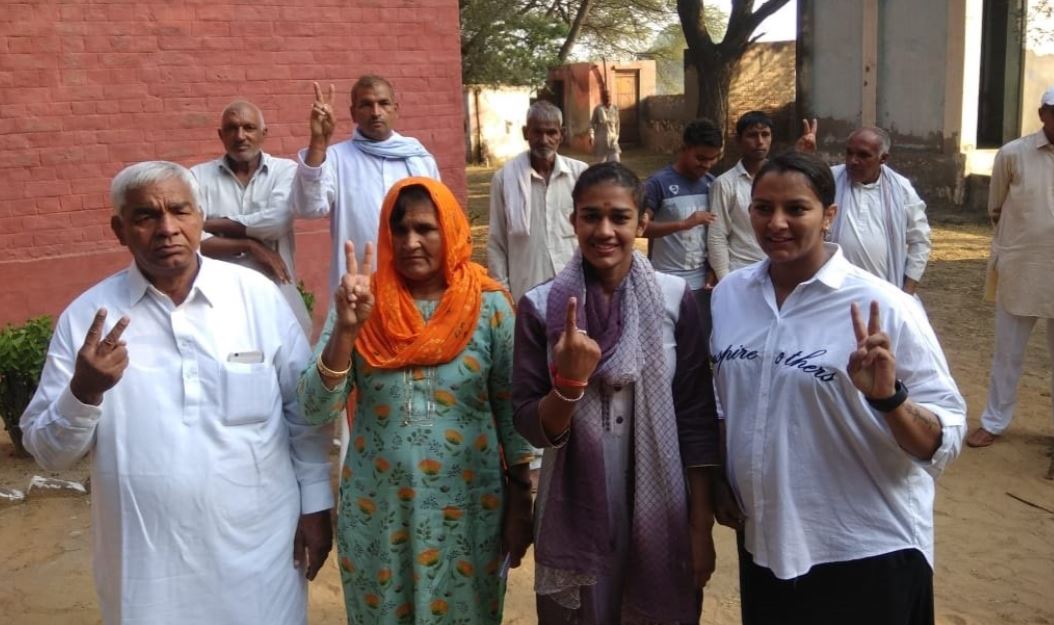 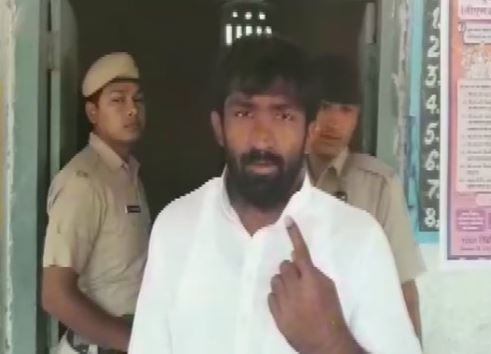 21 Oct 2019, 8:37 AM IST
Haryana: TikTok star Sonali Phogat who is contesting on a BJP ticket from Adampur constituency, after casting her vote. She is up against senior Congress leader Kuldeep Bishnoi. 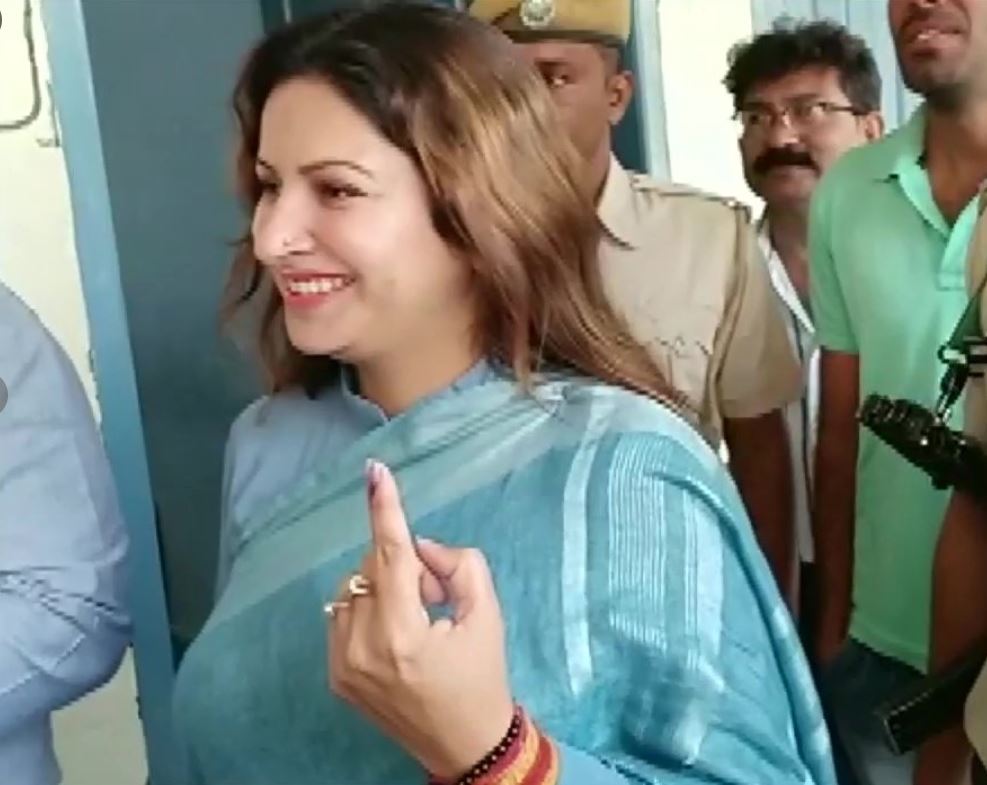 'Voting is our right, voting is our duty. And voting is an integral part of democracy. Do vote!' tweets Maharashtra CM Devendra Fadnavis. 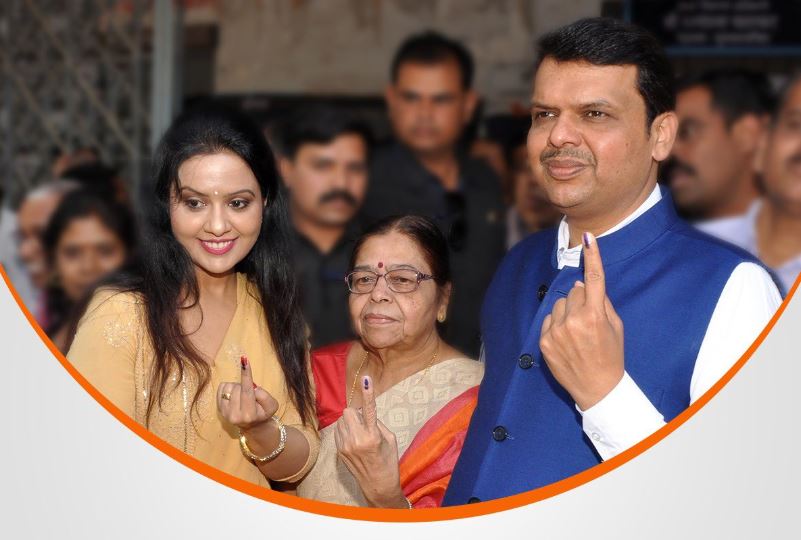 21 Oct 2019, 8:23 AM IST
Gurugram: Voting is on hold after an EVM machine at booth number 286 in Badshahpur stops working.
21 Oct 2019, 8:12 AM IST
As polling began in Maharashtra and Haryana, Union Home Minister Amit Shah appealed voters to turn up in large numbers.

21 Oct 2019, 7:54 AM IST
In Haryana, the Congress is hoping to make a comeback following a change in guard in the state, while the BJP led by Chief Minister Manohar Lal Khattar has set a target of winning 75 seats out of 90 in which 1,169 candidates of various political outfits are contesting. Currently, the BJP has 48 members in state assembly.
21 Oct 2019, 7:53 AM IST 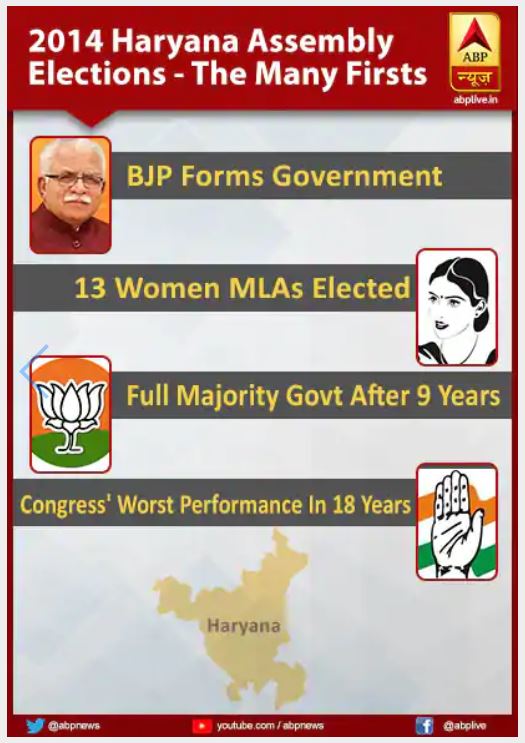 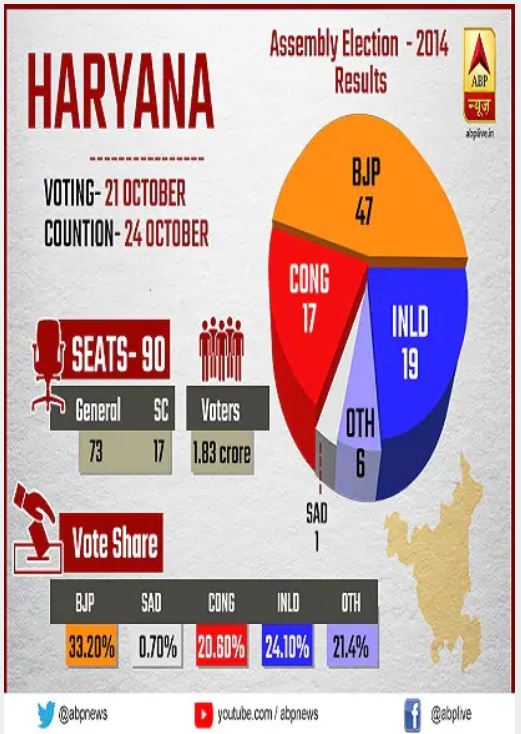 The ruling BJP is locked in a contest with the opposition Congress and the fledgling JJP for the 90 assembly seats in Haryana which has over 1.83 crore voters, including 85 lakh women and 252 transgenders, while 19,578 polling stations have been set up.
21 Oct 2019, 7:51 AM IST 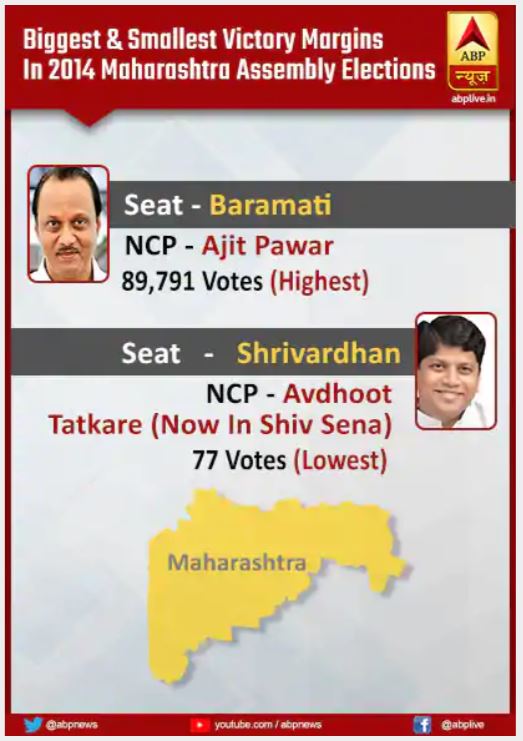 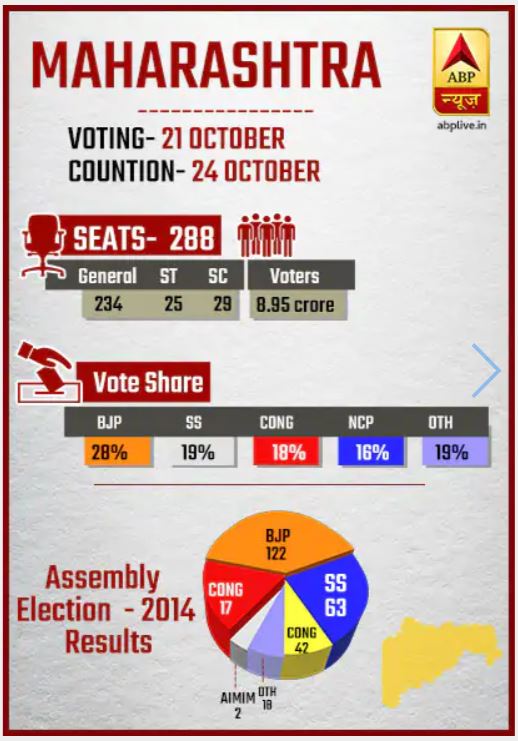 21 Oct 2019, 7:42 AM IST
Former Mumbai Police Commissioner Julio Ribeiro after casting his vote for the Worli Assembly constituency, tweets news agency ANI.
21 Oct 2019, 7:40 AM IST
RSS chief Mohan Bhagwat was among the early ones to cast his vote. 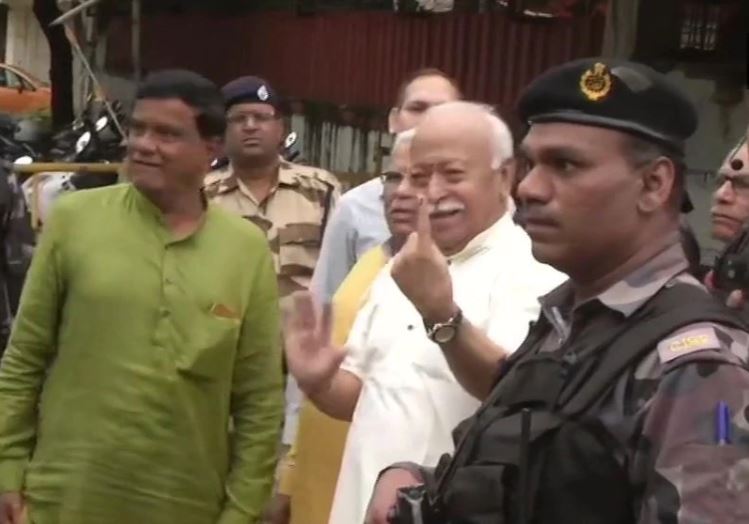 21 Oct 2019, 7:36 AM IST
PM Narendra Modi on Twitter: Elections are taking place for Haryana and Maharashtra assemblies. There are also by-polls taking place in various parts of India. I urge voters in these states and seats to turnout in record numbers and enrich the festival of democracy. I hope youngsters vote in large numbers.

Elections are taking place for Haryana and Maharashtra assemblies. There are also by-polls taking place in various… https://t.co/w6QFDYsR2N 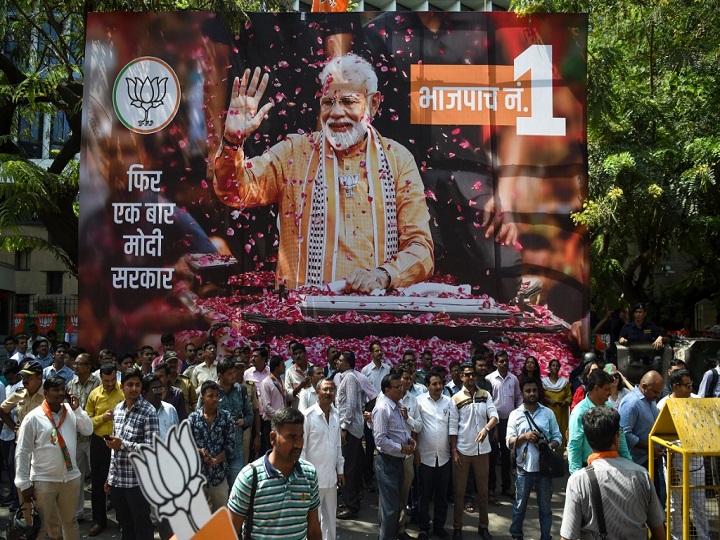 New Delhi: Polling for 90 seats of Haryana and 288 constituencies of Maharashtra has begun on Monday at 7 am and will continue till 6 pm in the evening. The electoral fate of over 4400 candidates- 1169 in Haryana and 3237 in Maharashtra will be sealed in EVMs by the voters who will exercise their democratic franchise in the assembly elections.

More than 40,000 Haryana Police personnel, over 13,000 paramilitary personnel and more than 20,000 Home Guards and Special Police Officers have been deployed for conducting the elections in the state. The assembly election in Haryana will witness a multi-cornered contest among BJP, Congress, Indian National Lok Dal (INLD) and Jannayak Janta Party (JJP).

For Maharashtra Assembly elections, 40,000 police personnel will be deployed in Mumbai and drones will be used for surveillance as part of security arrangements, Mumbai Police had earlier said.

Maharashtra police will also maintain strict vigil throughout the state with its personnel deployed for election duties in all districts along with home guards, companies of CAPF and CRPF for the polling day. BJP is contesting 150 seats in 288-member Maharashtra Assembly while its ally Shiv Sena has fielded 124 candidates. The remaining seats have been left for smaller allies. Congress is contesting the polls in alliance with Nationalist Congress Party in Maharashtra.

Campaigning in Maharashtra and Haryana for the Assembly elections, 2019 concluded on Saturday. The Model Code of Conduct had come into force on September 21 after the Election Commission of India (ECI) announced Assembly election dates.

The elections are significant as it is the first assembly polls after Modi steered the BJP-led NDA to a resounding victory in the Lok Sabha elections earlier this year for a successive second term at the Centre.

It is also the first assembly polls after the BJP-led government's decision to repeal Article 370 in Jammu and Kashmir. BJP is in power on its own in Haryana and in alliance with Shiv Sena in Maharashtra.