By: ABP News Bureau
Updated: 14 Dec 2017 06:47 PM
AHMEDABAD: The voting for the second and final phase of Assembly elections in Gujarat ended at 5 pm Thursday. The last phase saw 93 assembly seats spread across 14 districts in North and central Gujarat going to polls.

The first phase of voting for the 182-member house, held on December 9, covered 89 seats.

A total of 851 candidates are in the fray for the second phase, where 2.22 crore people are eligible to vote.

The Gujarat contest is being seen as a prestige battle for Modi in his home state, where a reinvigorated Congress has sewed up a broad social coalition with prominent Patidar, OBC, and Dalit leaders in its bid to unseat the BJP in power for over two decades.

The voting for second and final phase of Gujarat Assembly elections 2017 began at 8am on Thursday, in which 851 candidates, spread across 14 districts in north and central Gujarat, will test their luck.

The voting would end at 5 pm, and in total 2 crore 22 lakh voters will exercise their constitutional right. BJP veterans like Prime Minister Narendra Modi and Amit Shah will also cast their votes in the second phase of polling.

Allowing a roadshow of PM on voting day is a gross violation of code of conduct. It is an election campaign. What is the EC doing, asks former finance minister P @PChidambaram_IN #GujaratRound2 https://t.co/9vGr6iWrb3

On my way to cast my vote in Ahmedabad. 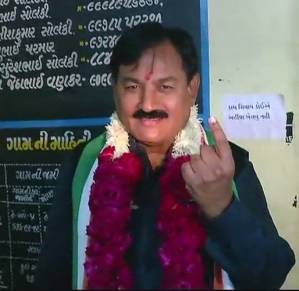 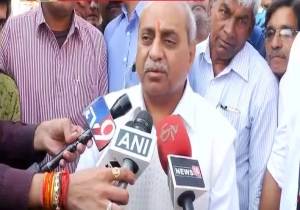 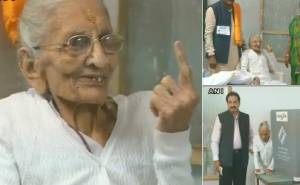 Prominent candidates in the fray for today's battle include state deputy chief minister Nitin Patel, who is
contesting from Mehsana against Jivabhai Patel of Congress.

Alpesh Thakor, who joined the Congress, is seeking election from Radhanpur constituency. Lavingji Thakor of the BJP is contesting against him.

Vadgam SC seat is another key constituency from where independent candidate Jignesh Mevani is fighting the election on Congress support against BJP's Vijay Chakravarti.

In Maninagar, the constituency once represented by PM Modi, Congress has given ticket to foreign-educated young face Sweta Bhrambhatt against BJP's sitting MLA Suresh Patel. Modi had vacated the constituency after becoming the PM in 2014.

Counting of votes will take place on December 18.

The influential Patidar community, which accounts for around 12 per cent of the state's population, could prove to be the 'X factor' in the polls, in which Hardik Patel has pledged support to the Congress and appealed to the people to "uproot the BJP" this time.

In the 2012 assembly polls, the BJP had won 115 seats, while the Congress bagged 61. The counting of votes will be taken up on December 18.