Lessons for Sasikala from Lalu's school

As the southern state grapples with its new political experiment of the hitherto little-known Edapaddi K. Palaniswami as proxy chief minister of AIADMK strongwoman V.K. Sasikala who is in jail in Bangalore, Bihar can sit back and say: "Been there, experienced that."

In the cheekiest succession act in India's political annals, RJD chief Lalu Prasad, chargesheeted in the fodder scam and forced to quit as chief minister in July 1997, pulled a chief minister out of his home. He forced the mantle on his wife Rabri Devi, already sobbing at the prospect of her husband being thrown into jail. 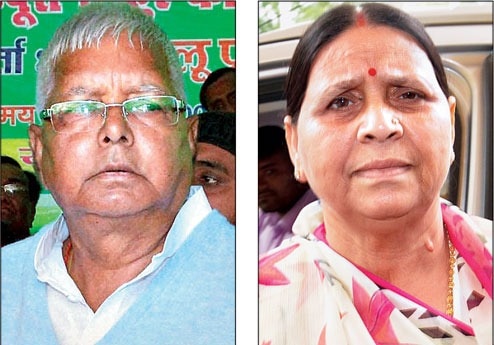 
Rabri was probably the only chief minister who went to Raj Bhavan wailing she wouldn't take oath, on July 25, 1997. Once she did take oath, however, Rabri was the ideal proxy ruler - if there can be indeed such a thing in a democracy.

Initially, she avoided the media like the bubonic plague. Her statements came through the state government's public relations department, which stuck to figures and facts. Later, Rabri did start to speak to the media - usually against the BJP - but she shied away from being chief guest at public events.

She stepped out of 1 Aney Marg - the official residence of the Bihar chief minister in Patna - for her office in the secretariat only when cabinet meetings were held. This pattern continued right till she left office - irrespective of whether her husband was in jail or out.

"The cabinet meetings became like tea parties," recalled a minister in that cabinet. "The chief secretary used to read out the agenda and there would be no discussions as Rabri Devi presided over the short meetings. The agenda was passed without a word uttered either by the chief minister or the ministers. The visit of Rabri Devi to the chief minister's office in the secretariat became more and more infrequent and all the files went to 1 Aney Marg. Even officials giving us the files used to hint that the proposal had the approval of Lalu ji."

Every official knew where the real power was, the former minister added, stressing that the RJD chief handpicked all the officials.

When Lalu Prasad was sent to jail, the district administration cited security reasons to keep him and another former chief minister, Jagannath Mishra, in the Bihar Military Police guesthouse instead of Beur Central Jail.
Ministers and senior officials, including the chief secretary and principal secretaries, would make a beeline to the guesthouse. When in 1998, the Supreme Court took exception to keeping Lalu Prasad in a guesthouse and shifted him to Beur Central jail, the government brass made a beeline to the central jail.

"Lalu Prasad used to call up anyone he wanted to meet and they would go with the files," recalled a former bureaucrat.

"To rule by proxy, one does not only need a kin to keep the chair warm; one also needs a bureaucrat like Mukund Prasad, an official Lalu Prasad trusted absolutely," said an RJD leader who has been a minister in both Lalu Prasad's and Rabri Devi's cabinets. "Before going to jail for the first time in connection with the fodder scam in July 1997, Lalu Prasad specifically told Rabri Devi not to sign any file without the consent of Mukund Prasad."

"If there was any conflict of views in the government, it was Mukund Prasad's views that would prevail," said another former minister, recalling how his foreign tour was torpedoed when he visited Lalu Prasad in jail and the RJD asked him to "consult" Mukund babu.

Rabri Devi signed on the dotted line only after Mukund's go-ahead.

"Lalu Prasad succeeded only because Rabri Devi was his wife," said former Bihar chief minister Jitan Ram Manjhi, who himself was elevated to the chief minister's chair by Nitish Kumar after the Janata Dal United's humiliating defeat in the 2014 Lok Sabha polls. However, that particular proxy-rule experiment failed.

"It was humiliating," recalled Manjhi, who has since then floated his own party. "Every file used to come to me after being vetted by Nitish Kumar. He decided who to post in key positions where. Officials and employees behaved as if they were answerable to Nitish Kumar and not to me. I began to think that all the credit of governance is going to Nitish Kumar and all the discredit is going to me. So, after five months I started functioning on my own, taking decisions and pinpointing the scams. That was the time when they (read Nitish) decided to get rid of me.

Sasikala, too, might not be able to "hold on" to Palaniswami, Manjhi felt. "At some time, a person's zameer (conscience) starts awakening," Manjhi added. Thus, there is no surprise in why the AIADMK government is eager to shift Sasikala from Bangalore - where she is a category B prisoner - to Tamil Nadu.

From outside Tamil Nadu, it would be difficult for Sasikala to keep Palaniswami's zameer from awakening.