The special CBI court pronounced its judgment over Sexual Harassment case against Ram Rahim at 2:30 pm on Friday 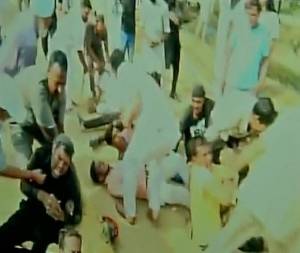 With hours left for the CBI court's verdict, tension mounting in Haryana's Panchkula and  adjoining areas , Army was called in to deal with any situation along with other security forces.

Central para-military forces and Haryana Police tried to evict the Dera Sacha Sauda supporters gathered in thousands at various places in Panchkula, through the intervening night of Thursday and Friday.

However, the sect disciples stayed put.

The verdict in the rape and sexual exploitation of a woman devotee allegedly by self-styled godman -- the Dera chief -- was likely to be announced around 2.30 pm.

Haryana Director General of Police (DGP) B.S. Sandhu said that 20 columns of the Army have been requisitioned. They have staged a flag march on Friday morning.

This is in addition to thousands of para-military forces and Haryana Police personnel already deployed in Panchkula.

Residents of Panchkula town had been facing a harrowing time in the past 72 hours with the heavy deployment of security forces, Dera followers swarming roads, parks and other open spaces and several roads being barricaded. Shops and other establishments remained shut on Friday fearing violence after the verdict.

The Dera chief was expected to arrive in the Panchkula special CBI court on a helicopter from his sect headquarters near Sirsa town in Haryana. He was asked to be present during the verdict.

Police sources said that the sect chief will fly out from his Sirsa headquarters around 12 noon.

Singh, late on Thursday night, issued a video appeal to his followers to leave Panchkula and return to their homes. "I had appealed to followers earlier also not to go to Panchkula. I appeal to them to return to their homes. I will appear before the court and I will go there," he said in his appeal.

The situation was tense at the Dera headquarters, about eight km from Sirsa town.