State Congress President Bhupesh Baghel was on Monday sworn in as the third Chief Minister of Chhattisgarh, bringing to an end 15-year rule of the Bharatiya Janata Party (BJP) in the state. Baghel, who represents Patan Assembly constituency in Durg district, was administered the oath of office and secrecy by Governor Anandiben Patel in the presence of Congress President Rahul Gandhi and former Prime Minister Manmohan Singh, among other dignitaries

17 Dec 2018, 10:30 PM IST
Three Congress chief ministers on Monday took oath of office in three previously BJP-ruled Hindi heartland states of Rajasthan, Madhya Pradesh and Chhatisgarh with most of the opposition leaders present in the swearing-in ceremonies that also turned into a show of unity against the saffron party.
17 Dec 2018, 10:30 PM IST

BSP chief Mayawati and Samajwadi Party chief Akhilesh Yadav, whose parties have extended support to the Congress government, were conspicuous by their absence in the Congress' 'show of strength' in three states. West Bengal chief minister Mamata Banerjee also did not participate....

Raipur: Bhupesh Baghel takes oath as the next Chief Minister of #Chhattisgarh https://t.co/YMOnKaOf92

17 Dec 2018, 2:37 PM IST
Madhya Pradesh CM oath ceremony LIVE Updates: Veteran Congress leader Kamal Nath has sworn in as the 18th Chief Minister of Madhya Pradesh.
17 Dec 2018, 2:10 PM IST
Defending Kamal Nath over his alleged involvement in 1984 anti-Sikh riots, Congress leader Shashi Tharoor said that Nath should get same benefit of doubt as Narendra Modi is given about his handling of the 2002 Gujarat riots. “No court found any evidence against him to convict him. It is wrong to make a judgement based on unsubstantiated and unproven allegations,” he said.
17 Dec 2018, 2:09 PM IST

17 Dec 2018, 12:42 PM IST
Now from Jaipur, Congress chief Rahul Gandhi will fly to Bhopal where he will attend the swearing-in of Kamal Nath as the new Chief Minister of Madhya Pradesh. In the just concluded Assembly polls in the state, the Congress won 114 seats in 230-member House. The BJP bahhed 109 seats. The BJP had dethroned Congress in Madhya Pradesh in 2003 and since then it was ruling the state.
17 Dec 2018, 11:32 AM IST
Former chief minister of Jammu and Kashmir Omar Abdullaha took to Twitter to wish Kamal Nath, Ashok Gehlot and Bhupesh Baghel who will take oath as chief ministers of Madhya Pradesh, Chhattisgarh and Rajasthan respectively today. Best wishes to @ashokgehlot51 ji, @SachinPilot, @OfficeOfKNath ji & @Bhupesh_Baghel ji as they assume the responsibility of guiding their states for the next five years," he wrote.
17 Dec 2018, 10:30 PM IST
While the Congress is celebrating the oath ceremony of new Rajasthan CM Ashok Gehlot in Jaipur, there is a bad news for the party from Delhi. Senior Congress leader Sajjan Kumar has been accused in 1984 anti-Sikh riots and held guilty by Delhi High Court today. Read more:
17 Dec 2018, 11:20 AM IST

In October, the High Court had reserved its order on the pleas challenging a trial court judgement which had acquitted Congress leader Sajjan Kumar but convicted the other five accused in the case related to the killing of five people in Delhi Cantonment area following the assassination of Indira Gandhi on October 31, 1984....

17 Dec 2018, 11:17 AM IST
Rajasthan Pradesh Congress Committee chief Sachin Pilot was sworn in as the Deputy Chief Minister of Rajasthan at an event in Jaipur's Albert Hall on Monday. Governor Kalyan Singh administered the oath of office and secrecy to him in the presence of Rahul Gandhi, Manmohan Singh and Vasundhara Raje. 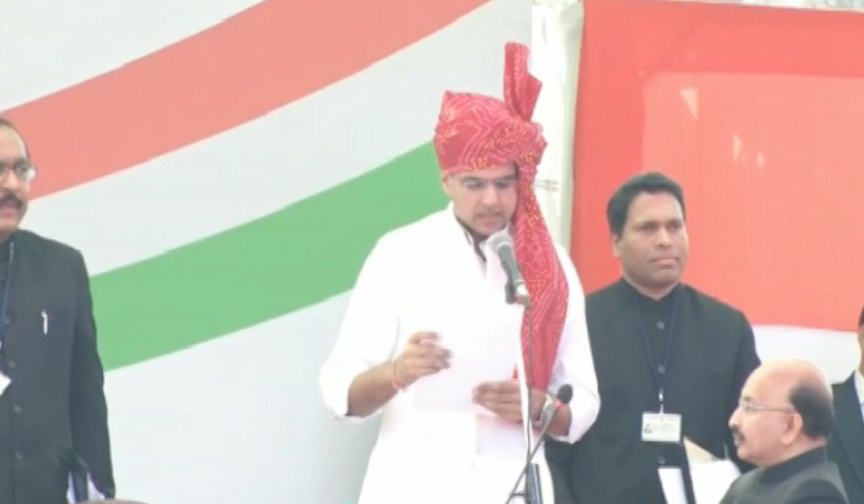 17 Dec 2018, 11:16 AM IST
Ashok Gehlot on Monday took oath as the 12th Rajasthan Chief Minister at an event in Jaipur's Albert Hall. Governor Kalyan Singh administered the oath of office and secrecy to Gehlot. The event was attended by Rahul Gandhi, Manmohan Singh and former Chief Minister Vasundhara Raje among others. 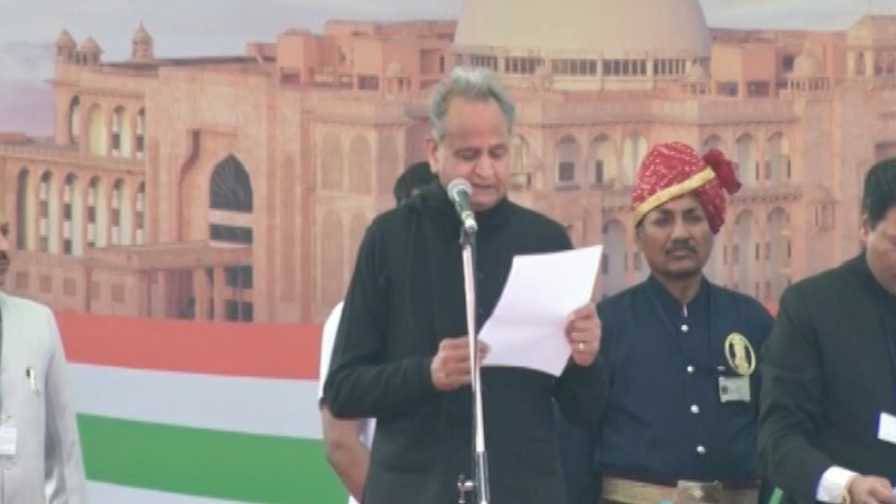 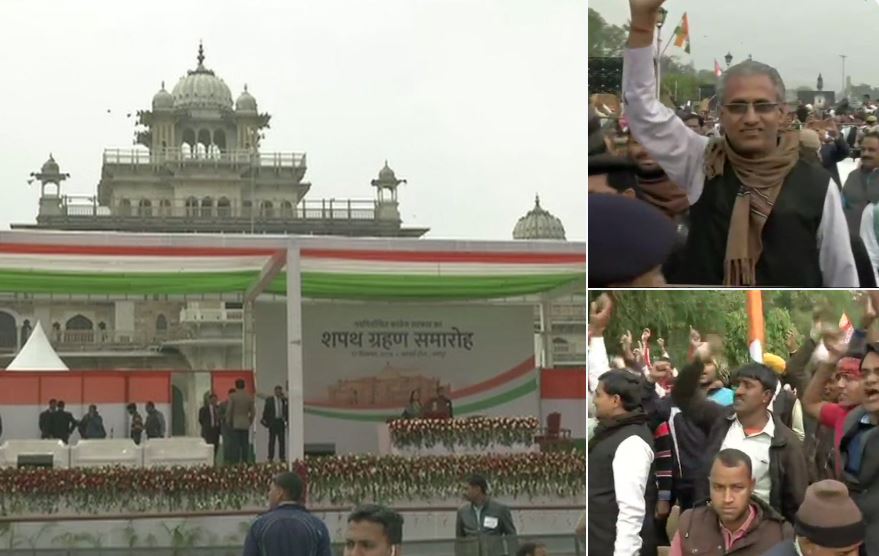 17 Dec 2018, 10:31 AM IST
BSP chief Mayawati and Samajwadi Party chief Akhilesh Yadav will not attend the oath ceremonies of Congress Chief Ministers in Rajasthan, Madhya Pradesh and Chhattisgarh. Both the BSP and SP are extending support to the Congress in Rajasthan and Madhya Pradesh to go past the magic figure. Besides, West Bengal CM Mamata Banerjee will also be not there at the event. Meanwhile, Delhi CM Arvind Kejriwal has also made distance from the event. 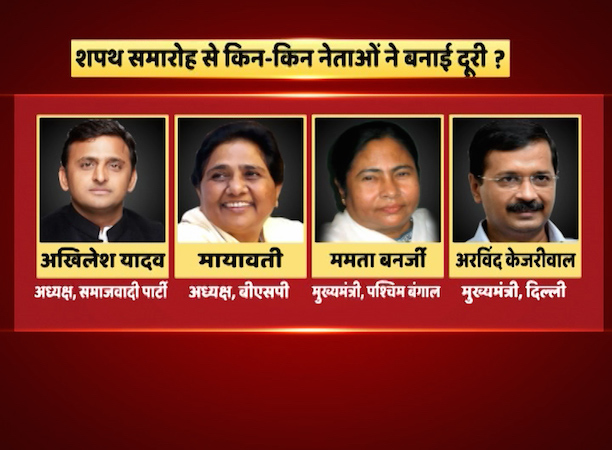 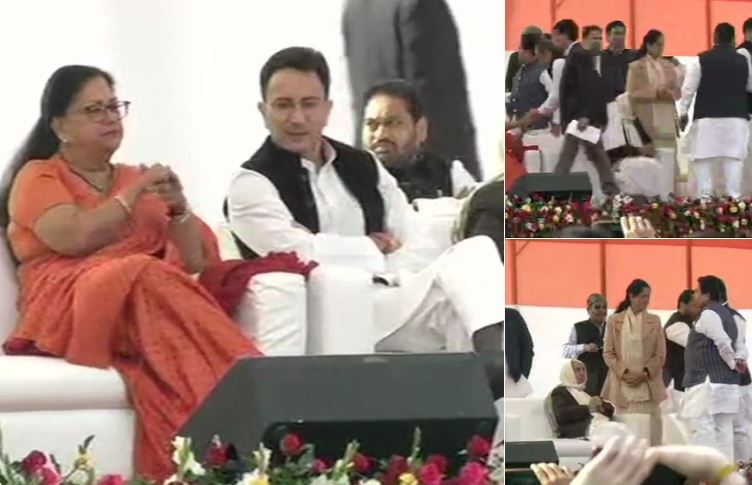 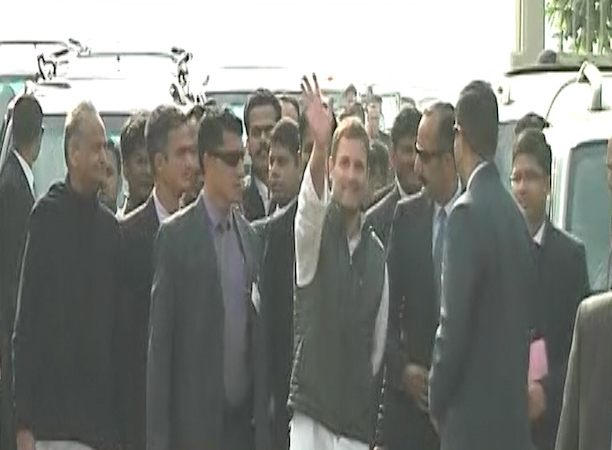 17 Dec 2018, 10:30 PM IST
While this is seen as another opportunity to present a united opposition front against the ruling BJP ahead of the general elections, Samajwadi Party (SP) President Akhilesh Yadav, Bahujan Samaj Party (BSP) Chief Mayawati and West Bengal CM Mamata Banerjee will not be there in the swearing-in ceremonies in Rajasthan, Chhattisgarh and Madhya Pradesh today.
17 Dec 2018, 9:32 AM IST
While Congress is all prepared for the swearing-in ceremony of its three CM-designates, Bharatiya Janata Party (BJP) is geared up to press an attack on the Congress party and its president Rahul Gandhi over Rafale deal. BJP has sought to turn the tables on the Congress over the Rafale issue. It has deployed its top leaders, including chief ministers and Union ministers, who will speak at several press conferences in as many as 70 cities across the country.

In order to attack the party, BJP has decided to deploy its top leaders, including chief ministers and Union ministers, in 70 cities across the country today to attack the opposition party....

www.abplive.in
17 Dec 2018, 9:27 AM IST
Among other opposition leaders who have been invited and are likely to attend the ceremonies include JMM's Hemant Soren, Jharkhand Vikas Manch leader Babulal Marandi, Swabhimani Paksh leader Raju Shetty and former Bihar chief minister Jitan Ram Manjhi.
17 Dec 2018, 9:27 AM IST
Sources said the Congress has also invited the Aam Aadmi Party and its leader Sanjay Singh is likely to attend the events.
17 Dec 2018, 9:26 AM IST
Andhra Pradesh chief minister N Chandrababu Naidu will be attending the events along with RJD leader Tejashwi Yadav, other leaders invited include AIUDF leader Badruddin Ajmal, TMC leader Dinesh Trivedi and LJD leader Sharad Yadav.
17 Dec 2018, 9:26 AM IST
A host of opposition leaders are expected to attend the swearing-in of Ashok Gehlot, Kamal Nath and Bhupesh Baghel as chief ministers of Rajasthan, Madhya Pradesh and Chhattisgarh respectively today. While Congress president Rahul Gandhi will be attending all the three oath-taking ceremonies, other prominent opposition leaders likely to attend the events include former prime minister H D Devegowda and Karnataka chief minister H D Kumaraswamy and former Jammu and Kashmir chief minister Farooq Abdullah.
17 Dec 2018, 10:30 PM IST
Ashok Gehlot will be sworn-in as Rajasthan CM in Jaipur at historic Albert Hall at 10 am, while Kamal Nath will take the oath in MP's capital Bhopal around 1:30 pm followed by Bhupesh Baghel in Chhattisgarh's Raipur at 4:30 pm.
17 Dec 2018, 10:30 PM IST
Welcome to Chief Minister Oath Ceremony LIVE BLOG. This blog is dedicated to bring you the first and latest update on CM oath-taking ceremony of Ashok Gehlot, Kamal Nath and Bhupesh Baghel who will take oath as Chief Ministers in state capitals–Jaipur, Bhopal and Raipur, respectively.

CM Oath Ceremony in Rajasthan, Madhya Pradesh, Chhattisgarh Live Updates: The swearing-in ceremony of Congress' newly elected leaders Ashok Gehlot as Rajasthan Chief Minister, Kamal Nath as Madhya Pradesh Chief Minister and Bhupesh Baghel as Chhattisgarh Chief Minister, will take place today. In the recently-concluded Assembly elections, the results of which were declared on December 11, the Congress dealt a massive blow to the BJP by ousting its governments in the three 'Hindi heartland' states. As per the report, Gehlot will be sworn-in as CM in Jaipur at historic Albert Hall in the morning at 10 am, while Kamal Nath will take the oath in MP's capital Bhopal around 1:30 pm followed by Baghel in Chhattisgarh's Raipur at 4:30 pm.

The Congress has also extended an invitation to the Aam Aadmi Party (AAP) as well to attend the ceremonies, signalling a possible thaw in ties. The swearing-in ceremony of Rajasthan Chief Minister-designate Ashok Gehlot and deputy Chief Minister-designate Sachin Pilot is scheduled to take place at Jaipur at 10am.  Congress party chief Rahul Gandhi and senior party leader Mallikarjun Kharge are expected to attend the ceremony along with a host of other leaders from across the political spectrum.

In Madhya Pradesh, Chief Minister-designate Kamal Nath will take oath at the Jamboree Maidan in Bhopal at 1.30pm. The ceremony will be preceded by an all-religion prayer meeting.

Congress on Sunday named Bhupesh Baghel as the chief minister face of Chhattisgarh. Baghel will be sworn in on Monday at 4.30 pm, the ceremony will be held at Science College Ground in Raipur.The Congress party had registered a resounding victory in Chhattisgarh, winning 68 seats as opposed to the BJP's 15, in Rajasthan the Congress bagged 99 seats, and the BJP 73.