Maharashtra Bandh: No 'Dabbawalas' service in Mumbai amid protests

By: ABP News Bureau
Updated: 03 Jan 2018 04:39 PM
Mumbai: The Maharashtra bandh, called to protest the violence post an event to mark the 200th anniversary of Bhima Koregaon battle, turned violent on Wednesday even as rail, Dabbawalas services, and road traffic was disrupted in the city.

Mumbai's famed tiffin carriers 'Dabbawalas' chose not to provide their services on Wednesday.

Mumbai Dabbawallas Association decide to not run its delivery service, today; head of the association Subhash Talekar says "means of transportation difficult for delivery of tiffins on time during #MaharashtraBandh" #BhimaKoregaonViolence pic.twitter.com/6TiVFH2hD0

A spokesperson of the Mumbai Dabbawala Association said, "Since most of our customers may find it difficult to reach the office, we have decided to suspend our services today".

Mumbai Police registered nine cases today in connection with violent protests in the city. Over hundred people have been detained in the city since yesterday, police said. 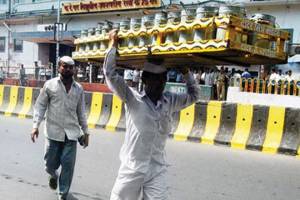 Several local trains running towards CSMT were halted at various stations because of the protestors who stood on the tracks prohibiting any train movement.