His wife said, "Police beat him up, hung him upside down, tortured him & even sedated him to make him confess."

By: ABP News Bureau
Updated: 23 Nov 2017 05:43 PM
Haryana: Bus conductor Ashok Kumar who reached home last night after being released from Gurugram's Bhondsi jail narrated his agony which he received from the hands of Gurugram police.

In an exclusive conversation with ABP News channel Ashok Kumar said-"Cops (Haryana police) assaulted me and gave me electric shocks."

He was arrested by Gurugram police in the Pradyuman murder case.

The bus conductor thanked the media for his return to his family, said that he was in a lot of pain.

His wife said, "Police beat him up, hung him upside down, tortured him & even sedated him to make him confess." 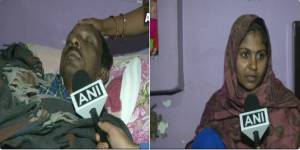 Giving a new twist to the case, CBI, which is now investigating the entire episode, has apprehended a Class XI student in connection with the killing of a seven-year-old schoolboy in Gurgaon's Ryan International School, the agency said.

The Class XI student, who was apprehended late last night, allegedly committed the crime as he wanted to get a scheduled parent teacher meeting and an examination postponed, a CBI spokesperson said.

Pradyuman, a class II student of the school, was found dead with his throat slit by a sharp-edged weapon on the morning of September 8.

The weapon used in the crime has been seized.

"We have come to the conclusion on the basis of CCTV, forensic evidence and scientific evidence. The student has been apprehended. He remains our prime suspect," the spokesperson said.

The juvenile student, who is about 16 years old, was apprehended late last night and his parents were kept in the loop all through, the agency said.

Police in Gurgaon had arrested school bus conductor, Ashok Kumar, for the crime the same day.

However, the grief-stricken father of seven-year-old Pradyuman, has still not given clean chit to the bus conductor and said prime suspect bus conductor Ashok Kumar could not have executed the crime alone and that some others were involved in it.