The new denomination has motif of Sun Temple, Konark on the reverse, depicting the country's cultural heritage

By: Kirti Joshi
Updated: 03 Mar 2018 07:43 PM
NEW DELHI: The RBI on Friday issued a press release on the introduction of new Rs 10 note. The notes will shortly be issued in the Mahatma Gandhi (New) Series. 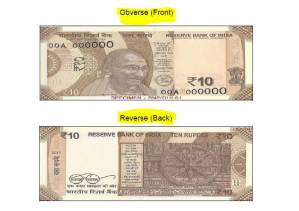 The new banknotes will bear the signature of Dr. Urjit R. Patel, Governor, Reserve Bank of India and will have the motif of Sun Temple, Konark on the reverse. The Sun Temple will depict the country's cultural heritage.

As shown in the pictures, the base colour of the note is Chocolate Brown and will have other designs, geometric patterns aligning with the overall colour scheme, both at the obverse and reverse. The dimension of the banknote will be 63 mm x 123 mm.

The press release also states that the banknotes in the denomination of ₹ 10/- issued by the Reserve Bank in the earlier series will continue to be legal tender.