The incident comes 2 days after Sujuwan Army camp was attacked by the terrorists in Jammu.

By: ABP News Bureau
Updated: 12 Feb 2018 08:02 PM
Srinagar: Terrorists on Monday morning attacked a CRPF camp in Srinagar where one CRPF soldier was martyred. The camp is situated in Karan Nagar area of Srinagar.

A sentry at CRPF 23 Battalion Headquarters, Karan Nagar, had first spotted two militants carrying 'Pithu' (backpack) bags and armed with AK-47 rifles. He opened fire due to which the militants escaped towards a nearby locality.

A search was then conducted where bulltes were fired on them near Gole Market which led to the encounter.

It is to br noted that the encounter is still on.

The incident comes 2 days after Sujuwan Army camp was attacked by the terrorists in Jammu.

Five soldiers and a civilian lost their lives in Sunjuwan terror attack, when terrorists attacked Army camp. The operation continued for two days and finally ended on Sunday. 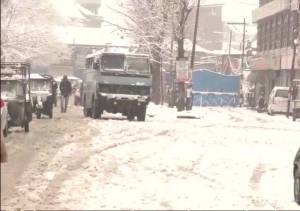