TN: Palaniswami passes floortest, 122 MLAs in vote in his favour in TN Assembly

Palaniswami, who was sworn in on Thursday as Chief Minister, won with 122 votes for the motion, while 11 votes were cast against the confidence vote by the rival AIADMK camp led by former Chief Minister O. Panneerselvam.

The end came tamely after DMK's 88 members, who were present were ordered to be evicted by Speaker P. Dhanapal after they indulged in ruckus.

After that Congress legislators walked out in protest, dashing the hopes of Panneerselvam.

The AIADMK camp led by Sasikala were obviously happy and distributed sweets.

"The traitors were defeated," A. Navaneethakrishnan, part of Sasikala camp told reporters here. 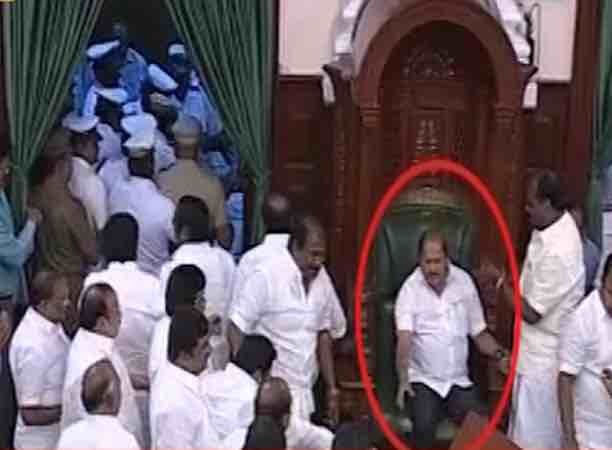 In the morning, soon after the assembly began, Palaniswami moved the confidence motion, which was followed by heated arguments started by DMK supremo and Leader of Opposition M.K. Stalin urging Speaker Dhanapal to allow secret ballot.

The Speaker, who belongs to the faction of AIADMK General Secretary V.K. Sasikala, stood his ground and said that legislators could not interfere with his powers.

He also questioned the need for urgency in seeking a confidence vote when Governor C. Vidyasagar Rao had given 15 days time to Palaniswami.

They tore the assembly agenda papers and some flung the mikes and chairs.

When the marshals tried to escort Dhanapal out, DMK members pulled him back to his chair. One DMK MLA sat on the Speaker's chair in protest.

Dhanapal first adjourned the House till 1 p.m. and later till 3 p.m.

Everything seemed to be in favour of Panneerselvam and Chief Minister Palaniswami was seen to be doing a tightrope walk till Saturday morning.

But the situation changed course in the assembly with the DMK indulging in ruckus forcing the Speaker to throw them out.

Speaking to reporters here after he and his party legislators were evicted from the assembly, Stalin said the party had demanded secret ballot to decide on the motion of confidence.

He said the party demanded adjournment of the house for a week so that legislators can go back to their constituencies and seek the people's views before they come back to vote on the confidence motion.

The DMK leader said he sat in protest inside the assembly to press his demand.

Stalin alleged he was forcibly evicted by the marshals and his shirt was damaged.

The AIADMK led by General Secretary Sasikala had the support of 123 legislators, including the Speaker, while the breakaway group led by Panneerselvam has 11 legislators.

The opposition includes the DMK with 89 members, Congress (eight) and Indian Union Muslim League (one), while one seat is vacant.

The DMK, Congress and IUML had said they will vote against the Palaniswami government.

The assembly has a total strength of 234, with one seat vacant.