UP Civic Elections Exit Poll: BJP set for huge victory, may win 15 out of 16 municipal corporations

UP Civic Elections Exit Poll Live Updates: In an exit poll conducted by the ABP News, the ruling BJP seems to be ahead of its rivals parties in major municipal corporations of the state.

By: ABP News Bureau
Updated: 29 Nov 2017 11:15 PM
NEW DELHI: Riding upon its stunning performance in the Assembly elections held in March, Uttar Pradesh's ruling BJP is again heading towards a resounding victory in the local body polls with 15 out of 16 municipal corporations are going to the saffron party, an exit-poll conducted by ABP News-C Voter has predicted.

BJP is likely to conquer 15 municipal corporations leaving no chance of revival for SP, Congress and BJP after the Assembly poll debacle earlier this year. According to the survey, no party was able to pose a serious challenge to the BJP. The only municipal corporation where BJP may end up at second place is Firozabad, where SP is likely to take the mayoral post with 30 per cent of votes.

BJP will get more than 40 per cent vote share in 12 municipal corporations, the exit poll predicted.

Polling for the third and final phase of civic body polls in Uttar Pradesh has ended on Wednesday. The Chief Minister has himself led the high-decibel campaign of the Bharatiya Janata Party, along with state unit chief Mahendra Nath Pandey, in the local body polls seen as the first test for seven-month-old Yogi Adityanath government. 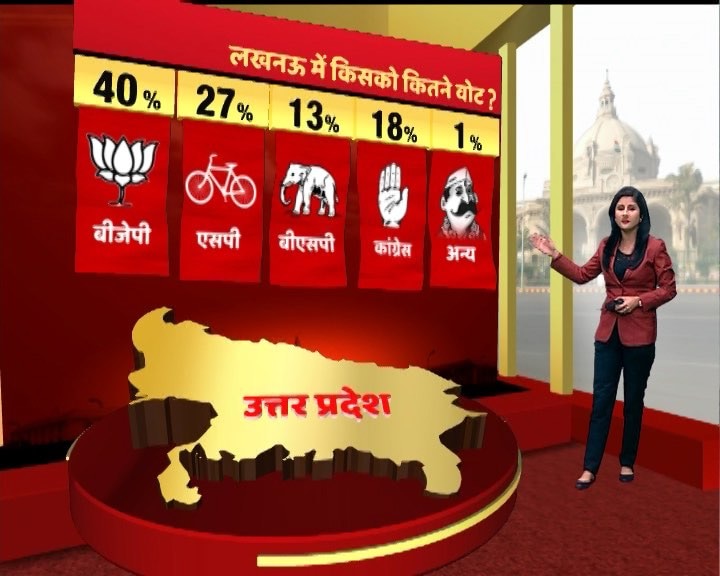 In Varanasi, Prime Minister Narendra Modi's Parliamentary constituency, BJP Mridula Jaiswal is likely to elected as the mayor the city with 45 per cent of votes. 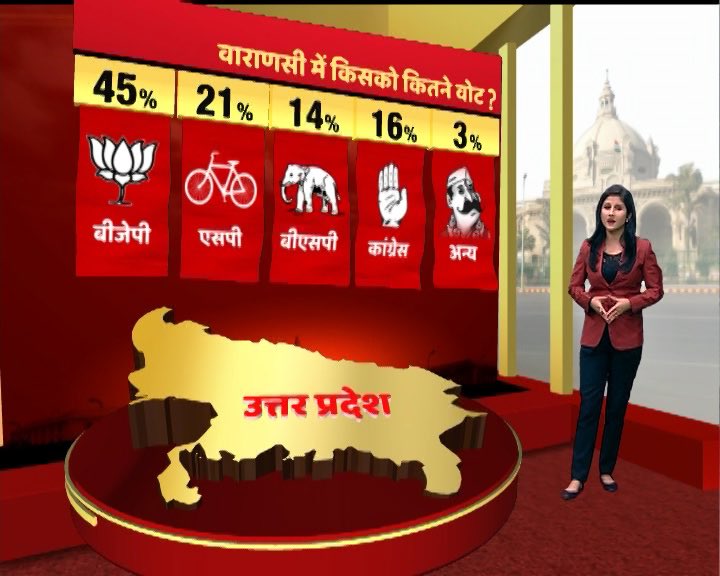 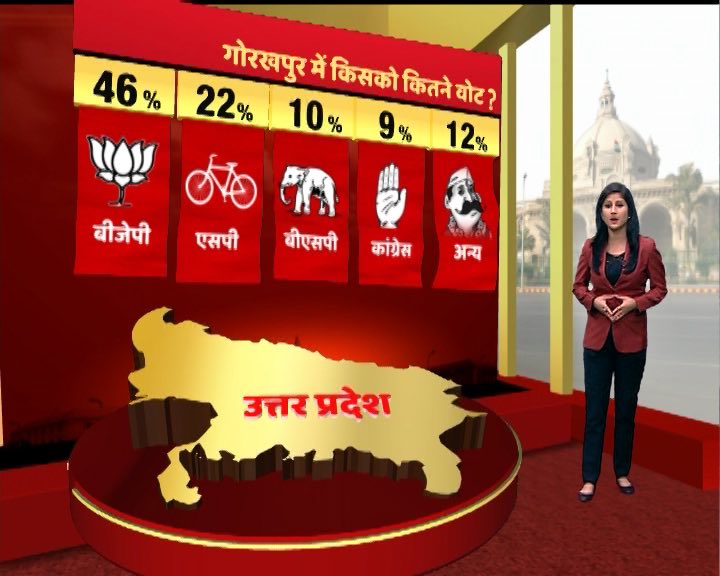 In Ayodhya, from where Uttar Pradesh chief minister Yogi Adityanath started his election campaign, people voted in BJP's favour. The saffron party is likely to get 48 per cent vote share in the temple city. 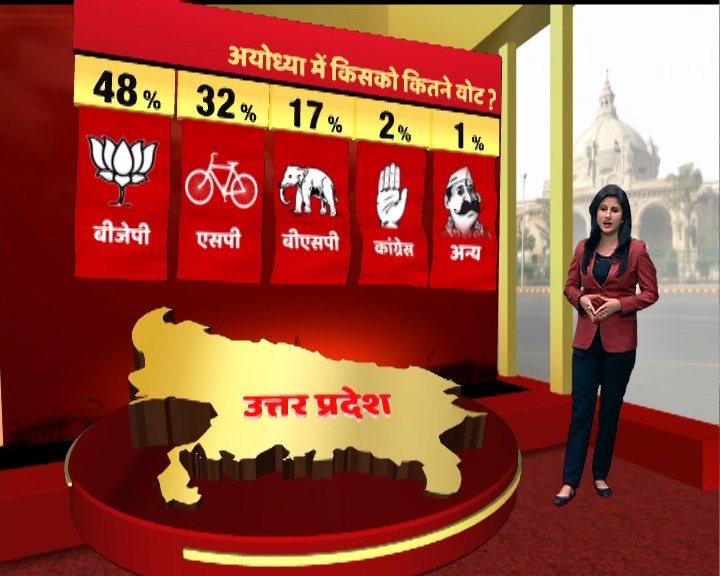 In Municipal Corporations of Kanpur and Allahabad, BJP is way ahead of SP and Congress. 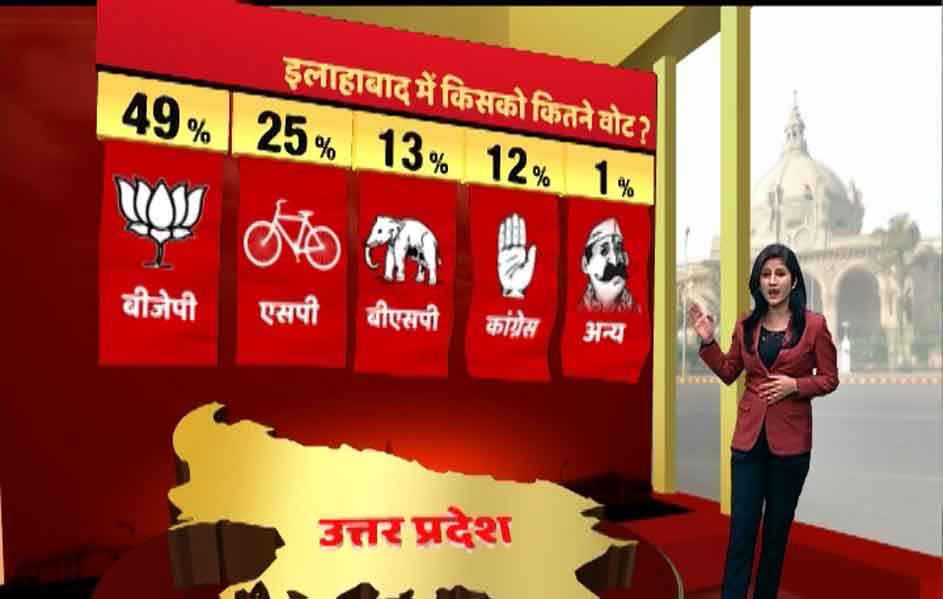 Of the urban body polls held in 2012, BJP had a mayor in 12 of the 14 municipal corporations. Only Allahabad and Rampur had mayors from the opposition camp. In 2012, Uttar Pradesh was under a Samajwadi Party (SP) rule and the feat was a major one for the BJP as it had not been in power for more than a decade then.

The Adityanath government after assuming office constituted municipal corporations of Ayodhya and Vrindavan-Mathura. In Mathura, BJP is set to win mayoral post with 50 per cent vote share. 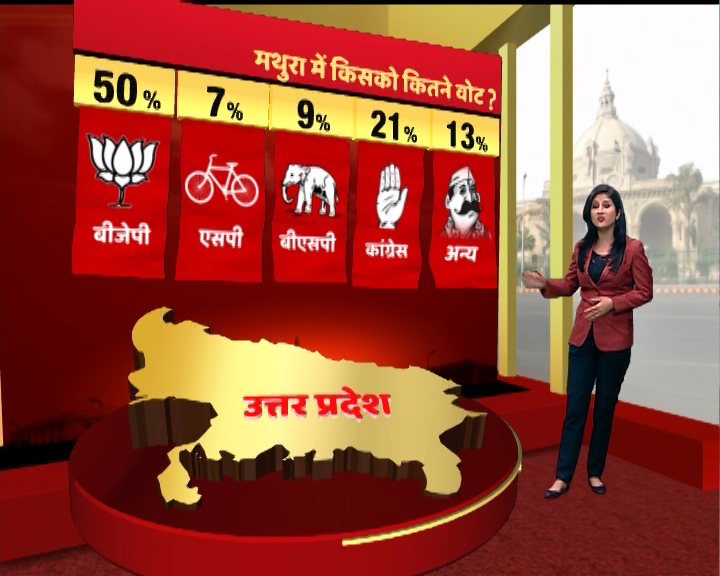 Bareilly and Agra are also going to BJP, according to the exit poll.


In Ghaziabad, BJP is getting around 50 per cent of votes.

#UPKaExitPoll BJP likely to get 50% vote share in Ghaziabad pic.twitter.com/G2qD9R77Cn