First Gabber Singh entered the state via GST (Gabbar Singh Tax) and within some time he was followed by Thakur.

By: ABP News Bureau
Updated: 13 Nov 2017 11:51 AM
New Delhi [November 13] (ABP Live): Just before the Gujarat assembly elections, the state has turned into a film scene from movie Sholay with the poster of Gabbar Singh and Thakur at many places.

First Gabber Singh entered the state via GST (Gabbar Singh Tax) and within some time he was followed by Thakur.

Via these posters, PM Narendra Modi in general and GST, in particular, are targetted. 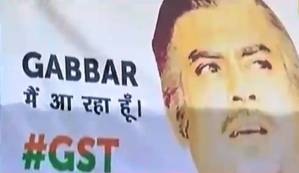 It is being said that during Rahul Gandhi's visit to Surat, for election campaigning, these posters were affixed

It may be recalled that Congress VP was the first to call GST, Gabbar Singh Tax.

The 14th Gujarat Legislative Assembly election, 2017 is scheduled to be held on 9 December 2017 and 14 December 2017 and all 182 members of the Assembly will be elected. The leader of the largest party or coalition will become the next Chief Minister.

The state is presently run by BJP