She waved at Chinese soldiers posted across the border at Nathu La and even interacted with them, on Saturday.

By: Anurag Kumar
Updated: 08 Oct 2017 05:04 PM
New Delhi: The Defence Minister Nirmala Sitharaman visited Nathu La area on the Sino-India border and interacted with not only Indian Army and Indo-Tibetan Border Police officials but also with Chinese troops across the fence.

She waved at Chinese soldiers posted across the border at Nathu La and even had a few words with them, on Saturday.

Sitharaman tweeted a photo that showed her smiling and waving at, what Defence Minister said was, "A row of Chinese soldiers from across the fence who were taking pictures on my (of Sitharaman) reaching Nathu La."

Acknowledged a row of Chinese soldiers from across the fence who were taking pictures on my reaching Nathu La. @DefenceMinIndia pic.twitter.com/7cWImtmfLG

She, on her official Facebook account, also posted a video of the conversation with the caption-"Snippet of Smt Nirmala Sitharaman interacting with Chinese soldiers at the border at Nathu-la in Sikkim yesterday. Namaste!"

Forgetting about Doklam tension, both sides interacted lively in the video and Sitharaman taught the Chinese Army personnel the meaning of word Namaste! 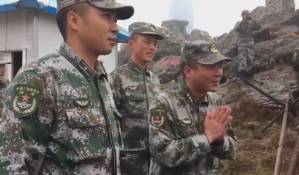 The video clip will definitely bring smile on your face. Have a look:

Interestingly, the interaction between the two sides came not too far away from Doklam issue, which till recently was the site of a major standoff between soldiers of the Indian Army and the Chinese People's Liberation Army (PLA).

About 2017 China–India border standoff at Doklam:

Doklam standoff refers to the military border standoff between the Indian Army and the People's Liberation Army of China over construction of a road in Doklam.

Chinese troops, on 16 June 2017, with construction vehicles and road-building equipment began extending an existing road southward in Doklam, a territory which is claimed by both China as well as India's ally Bhutan.

Around 270 Indian troops, on 18 June 2017, with weapons and two bulldozers, entered Doklam to stop the Chinese troops from constructing the road. Both India and China, on 28 August, announced that they had withdrawn all their troops from the face-off site in Doklam region.