With Lalu gone, who will lead RJD now?

By: ABP News Bureau
Updated: 06 Jan 2018 07:21 PM
NEW DELHI: After Lalu Prasad was sentenced 5-year jail term, his family is yet to decide who will lead RJD in Lalu Yadav's absence.

Tej Pratap Yadav said that right now their priority is to fight for justice. We will go to the Patna High Court for bail. He added that just like JP movement, Bihar will see LP movement. 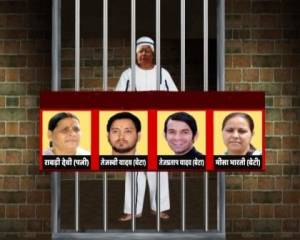 
Referring to Lalu’s letter, Tej Pratap said that I am a Lion's son, I will not get scared.

Lalu's younger son and leader of opposition in Bihar legislative assembly Tejashwi said that the judiciary performed its duty and we will go to the High Court after studying the sentence and apply for a bail.

Nevertheless, it will be difficult to fit in Lalu’s shoes as Lalu Prasad has always had a “larger than life impact” on RJD, and Bihar politics.

On Saturday, RJD supremo Lalu Prasad was sentenced to three and a half years jail in a fodder scam case. Special CBI judge Shivpal Singh announced the sentence after hearing arguments on quantum of sentencing.

Fine was also slapped on the former Bihar Chief Minister. The court had on December 23 convicted Lalu Prasad and 15 others in the case relating to the multi-million-rupee scam.