Yogi's 'Gerua' obsession continues, here is a list of all that turned saffron under his rule

A block of 100 toilets in Uttar Pradesh's Etawah has been given a saffron look. The village Panchayat has denied any political pressure behind the move.

By: ABP News Bureau
Updated: 12 Jan 2018 01:54 PM
Uttar Pradesh: It looks like that changing everything to saffron is Yogi Adityanath government's favourite time pass. "Rang de tu mohe gerua...” the song from the 2015 film Dilwale seems to be the song of the state these days.

'Gerua' the saffron color is usually in connection with Hinduism and the Bharatiya Janata Party (BJP).

After dipping the state secretariat, Haj office and a police station in Lucknow in saffron, the attention has now been focused on toilets. Under the Yogi rule, even the toilets in Uttar Pradesh are getting a saffron coat.

In a recent development, a block of 100 toilets in Uttar Pradesh's Etawah has been given a saffron look. It is to be noted that Etawah is the home district of state's former Chief Minister Akhilesh Yadav.  The village Panchayat has denied any political pressure behind the move.

People of the village suggested me this colour. When their (BJP) government has been formed not only in Uttar Pradesh but also in the nation, what is the problem if toilets are also painted in their colour: Vedpal Singh Nayak, Gram Pradhan pic.twitter.com/AwxMU9C3nI

Let's take a look at that which turned saffron under Yogi's rule in Uttar Pradesh:

Recently, Yogi Adityanath led Uttar Pradesh government, painted the green-and-white exterior wall of the Haj House in Lucknow to saffron, a move which was opposed by opposition parties and some Muslims in the state.  However, the saffron boundary wall was later repainted in cream colour.

In October, last year, Lal Bahadur Shastri Bhawan which houses the chief minister's office, the office of chief secretary and offices of other senior bureaucrats had also been painted in various shades of saffron. 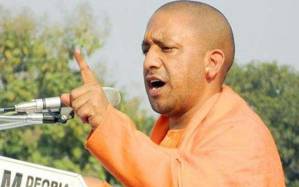 CM Yogi had also distributed saffron school bags and booklets to primary school kids. The list of official saffron things in the state now includes certificates for sportspersons, booklets with details of awardees, certificates for beneficiaries of crop loan schemes, identity cards at the Secretaria etc. 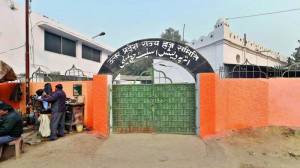 During this winter session, the saffron T-shirt as the new uniform of the waiters in the state's Vidhan Sabha canteen was also noticed.