Amy Jackson and her fiance George Panayiotou are expecting their first child together.

By: Filmymonkey Team
Updated: 13 Sep 2019 11:18 PM
New Delhi: Bollywood actress Amy Jackson, who was last seen in Rajinikanth and Akshay Kumar starrer ‘2.0’, is all set to become a mother. The 27-year-old actress and her fiancé George Panayiotou are expecting their first child together. The couple is quite excited to welcome a little bundle of joy into their lives. From posing topless to going on a road trip, Amy Jackson has grabbed eyeballs throughout her pregnancy.

The soon-to-be mommy is enjoying her pregnancy phase to the fullest and she keeps on sharing photos flaunting her baby bump on social media.

Amy shared a stunning photo on Instagram in which she can be seen flaunting her baby bump with another woman. She captioned her post as, ‘’ WorkingMomsss #38weekspregnant | lights ✔️camera ✔️swollen ankles✔️DUNGAREES AND BABYBUMPS.’’

The 38-weeks pregnant actress radiated pregnancy glow and looked beautiful in a black dungaree. Interestingly, the woman, who did Amy's maternity photo shoot is also pregnant.

(Swipe to see the photos)

The actress also posted another photo on her Instagram story. Check it out! 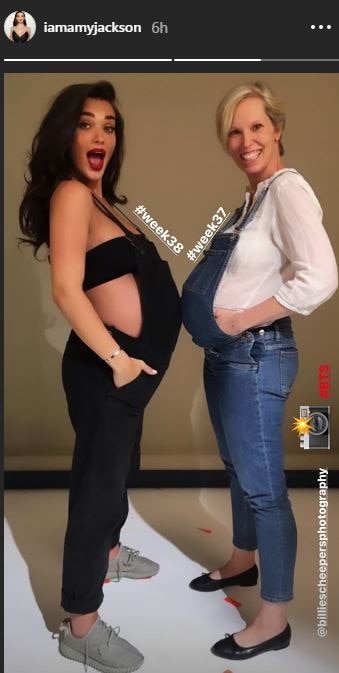 Amy had earlier shared a photo and video from her maternity shoot which took place when she was 33-weeks pregnant.

The caption for the post read, ‘’ When I thought my bump was BIG - the little man at #33weekspregnant on our maternity shoot with @samaramorrisphotographer Glam by @sandydmakeup @rosiecerosiomakeup.’’

Check them out right here!


When I thought my bump was BIG - the little man at #33weekspregnant on our maternity shoot with @samaramorrisphotographer Glam by @sandydmakeup @rosiecerosiomakeup ????

Amy Jackson enjoyed a fun-filled baby shower ceremony, which was attended by her family members and close friends. She also confirmed that she is having a baby boy.

Amy and her fiance George got engaged on May 5 in London in a grand ceremony. Their fans are now waiting to see the two lovebirds walk down the aisle.

On the professional front, Amy made her Bollywood debut with 'Ek Deewana Tha' opposite Prateik Babbar in 2012. She also worked in ‘Singh Is Bling’ co-starring Akshay Kumar.