By: IANS
Updated: 09 Jan 2017 04:23 PM
Mumbai: With "Dangal" registering a collection of Rs 345.3 crore, Bollywood star Aamir Khan has created a new record for the highest Hindi grosser, beating the business of his own movie "PK". The film's makers are overwhelmed.

Amrita Pandey, Vice President, Studios, Disney India, said: "Dangal' is an extremely special film for us at Disney, Aamir Khan and the entire cast and crew of the film. This is our ninth film with Aamir Khan, and with 'Dangal' we've broken our own record of 'PK'. Aamir has set new benchmarks with each of his movies." 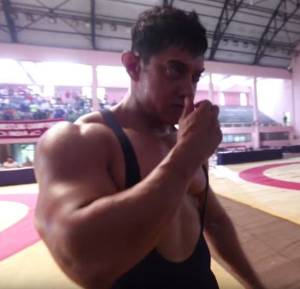 "Dangal" has been lauded by the audiences for its powerful portrayal of the story of Phogat, who, much to the disapproval of his wife and his whole village, trained his daughters Geeta and Babita to wrestle.

Christmas has turned out to be lucky for Aamir since the past few years. Even "PK", "Dhoom: 3" and "3 Idiots" released around the festival and their success gave the actor more reasons to celebrate.

According to Pandey, "Dangal' is breaking and setting new distribution circuit benchmarks all over India, in centres in key south markets, in Delhi, Uttar Pradesh, Punjab, Rajasthan and Central India. Even in key international markets like North America and Australia, 'Dangal' is setting new benchmarks."

"In fact, in North America, the movie is set to be the highest grossing foreign language movie for 2016. 'Dangal' is also the highest performing Hindi movie dubbed in Tamil language, beating the previous record of 'The Jungle Book'."