Actress Kangana Ranaut OPENS UP on MOTHERHOOD and BABIES!

By: ABP Live
Updated: 18 Dec 2016 03:22 PM
New Delhi: For her parents she was an "unwanted" child, who rebelled during her formative years and chose a career against her father's wish. But after a successful film career that transformed the rebellious youngster, Actress Kangana Ranaut is now thinking of the comforts of motherhood. "I think I have been fairly independent, but when you are in your late twenties, somewhere your maternal instincts start kicking in and you start to get that feeling very badly: 'I want to have babies'," the 29-year-old told IANS during an interview here.

"I never thought I would talk like this, but it gets really hard not to share it. I am hoping to see that day," added Kangana, who belongs to Mandi district in Himachal Pradesh.

Starting from her debut film "Gangster - A Love Story" in 2006, she has been appreciated for her performances in films like "Fashion", "Queen", "Tanu Weds Manu" and "Tanu Weds Manu Returns". The three-time national award winning actress' next projects are "Rangoon", "Rani Lakshmi Bai" and "Simran". Ask her if Bollywood has made her calmer, composed and patient now and she says: "Absolutely. The big fireballs which I felt growing up in my stomach somewhere has got an expression now. If I don't do anything for days, it starts to bother me."

She says that when she goes to film sets "I sort of find a way to express myself and give a weight to that energy. That expression is not just restricted to my films. If you go to my house or in my writing, you will find that expression."

She says with a smile and a confident voice: "Being a person in the creative field has allowed me to be a complete human being."

Through her portrayal of the lead role in "Queen", Kangana has rediscovered herself, taking risks and pushing the boundaries in her personal and professional life. It has also shut up those who used to point to her poor command of English and provided a befitting reply to media commentators who said she could not carry a film on her shoulders. 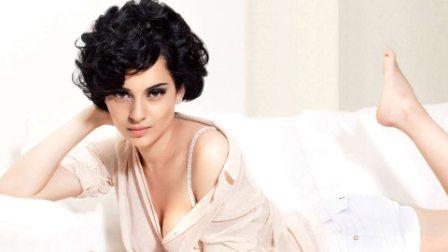 "I was someone who was very confused about what I wanted do, especially with the enormous energy that was almost on the verge of exploding. As a teenager, I did not know what to do with it, and hence the fights with parents," Kangana said.

But she now realises that the energy only needed a creative outlet. "Unleashing of those forces into something creative was amazing. I am glad that I started to act, write and do other things like poetry," she said.

The journey from a rebellious teenager to a successful actor was all about understanding herself and sharing her ideas with the world, she says.

The actress was in the capital to be part of Reebok's FiT To Fight awards where she felicitated some of "unsung women heroes" from different walks of life.

For her, being fit is the most important aspect of being alive. "When I am not able to exercise for days, or unable to meditate or eat without watching my diet, I literally feel dead. Everything just shuts down," she says.