By: Aashu Mishra
Updated: 23 Aug 2019 08:37 AM
Bollywood celebrities are voicing concerns over the raging fire in the lush rainforests of Amazon, home to a variety of flora and fauna.

Brazil has witnessed 72,843 fires in this year, half out of which were reported in the Amazon itself, according to CNN.

A host of celebrities are taking the lead to draw people's attention towards the blaze which has swallowed rainforest, famed for its biodiversity.

Alia Bhatt voiced her concern on Twitter and wrote, "The 'lungs of our planet' are burning! The Amazon Rainforest is home to about 3 Mn species of plants & animals and 1 Mn indigenous people. It plays an important role in keeping the planet's carbon dioxide levels in check. We won't exist without it! #SaveTheAmazon #PrayforAmazonas."

The 'lungs of our planet' are burning! The #AmazonRainforest is home to about 3 Mn species of plants & animals and 1 Mn indigenous people. It plays an important role in keeping the planet's carbon dioxide levels in check. We won't exist without it! #SaveTheAmazon #PrayforAmazonas https://t.co/9rKfTYXolL

Anushka Sharma who is also an animal lover urged world media to pay more attention to the issue.

"The Amazon rainforest has been burning for weeks and we are only just finding out this!! This is such scary news! Amazon forests are the lungs of this already suffering planet and they are on fire now! I wish this got more importance from world media!!" she wrote on Instagram story.


#Repost @leonardodicaprio ・・・ Terrifying to think that the Amazon is the largest rain forest on the planet, creating 20% of the earth’s oxygen, basically the lungs of the world, has been on fire and burning for the last 16 days running, with literally NO media coverage whatsoever! Why?

The rich and dense forests in Amazon are known to supply about 20 per cent of oxygen to the Earth's atmosphere and seeing this source of life ablaze, actor Dia Mirza who is also a UN Goodwill Ambassador also expressed worry.

"Earth's lungs have been on fire for the last 16 days. 72000 have been recorded only this year in the Amazon. Climate Change in REAL," she wrote.

Deniers of #ClimateChange our cities are now shrouded in darkness by the fires caused by your denial! #ClimateChangeIsReal The Amazon forest (Earth’s lungs) have been on fire for the last 16 days and 72000 fires have occurred this year. https://t.co/GjBIVuXgIh #PrayforAmazonas

Hrithik Roshan tweeted:The Amazon rainforest is burning at a record rate and for a frighteningly long time, marking a devastating hit on the world's efforts to combat climate change.

The Amazon rainforest is burning at a record rate and for a frighteningly long time, marking a devastating hit on the world's efforts to combat climate change. (1/2)

Let’s take a moment to remember that our environment is important and that it affects you and me directly or indirectly. Let us do our bit to protect the environment for ourselves and our future generations.(2/2)

The state of the Amazon forest is terrifying! It has been burning for 3 weeks & more!
Nobody seems to care about everything that is being lost; 500k hectares and 50% of the species in our world.
The media coverage is not enough! Please let's spread awareness!#PrayForTheAmazon 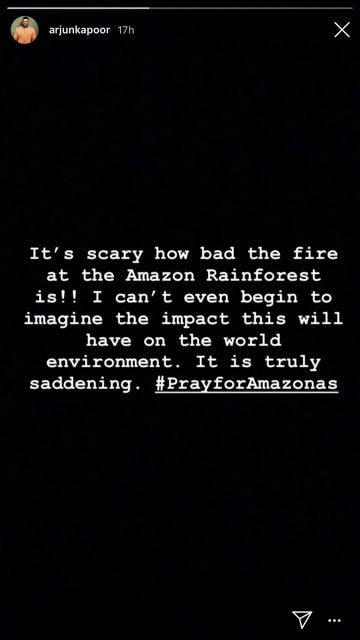 The wildfires took Twitter by storm with users sharing images of a heavy smoke arising out of the forest with the hashtag #PrayForTheAmazon.

Proving that the situation is serious, a user from Sao Paulo which is a little over 1700 miles away from the forests, shared a picture of a glass filled with rainwater which was dark and dirty.