By: ABP News Bureau
Updated: 19 Sep 2017 09:09 AM
Mumbai: On the first year anniversary  of 2016 released, National Award winner movie ‘Pink’, Amitabh Bachchan posted a picture on twitter. In the picture, he is seen along with the Director, Producer and other crew members of the film.

But he didn’t even have the slightest idea that, he would be trolled for this one post. Can you guess the reason behind it?

Actully, there is nothing wrong in the picture itself. But as the film’s lead protagonists were all three women and no one was in the picture, so it didn’t go well with his post. The picture posted by Amitabh, only had male members from the film. This was noticed by many twitteratis and soon Amitabh got trolled and criticised for posting this pic. 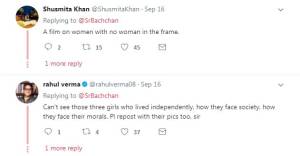 (The picture missed the lead protagonists of the film/ Image: Twitter@SrBachchan)