'2.0' actress Amy Jackson gave birth to her first child with fiance George Panayiotou a week ago on 23rd September who the couple named Andreas Jax Panayiotou

By: Shruti Srivastava
Updated: 30 Sep 2019 04:09 PM
Amy Jackson who appeared in multiple Bollywood films including Akshay Kumar-Rajinikanth's recent '2.0' and 'Singh is Bliing' among others, became mother to her first child with fiance George Panayitou on September 23. Amy's picture nursing her little one 3 days after his birth, went viral recently and while their son Andreas Jax Panayiotou's face was not revealed until now, the doting mommy has just shared his full face on Instagram by sharing his adorable picture with a beautiful message. Amy posted a cute-beyond-words picture of her week old boy and wrote in caption- "Andreas Jax Panayiotou ❤️ Just a little something to brighten up your Monday morning!".

The beautiful comments have started to pour in for the new parents with blessing showered on their baby by fans as well as some celebrities like Esha Gupta, Sophie Choudry and others.


Andreas Jax Panayiotou ❤️ Just a little something to brighten up your Monday morning! 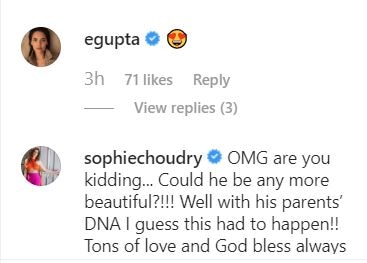 Amy had announced the arrival of her baby boy right after his birth on September 23rd with a picture from the hospital featuring the mommy-son and the daddy George who can be seen adorably kissing his finacee's forehead.

She had written- "Our Angel, welcome to the world Andreas ????"


Our Angel, welcome to the world Andreas ????

Amy and George are yet to tie the knot while they got officially engaged in first week of May this year when she was in her 2nd trimester.


I’ve been waiting to shout it from the roof tops, and today, being Mother’s Day, it couldn’t be a more perfect time... I already love you more than anything in this world, the purest most honest love. We can’t wait to meet you our little Libra one ❤️

The hottie Amy Jackson has been keeping fans updated also during her 9 month long journey and often made it to headlines with her pictures-videos flaunting her baby bump.


When I thought my bump was BIG - the little man at #33weekspregnant on our maternity shoot with @samaramorrisphotographer Glam by @sandydmakeup @rosiecerosiomakeup ????


Happy Birthday to my ride or die. Roll on to becoming a Mummy & Daddy! LoveYou ????


Greece!?! Nooo.. the munchkin and I are spending the rest of our Summer in the back garden, waiting for their little appearance! I’m officially in week 33 of pregnancy... Embracing my body and my bump.. stretch marks, weight gain and everything in between ???????? #MOTHERHODO