By: Pankaj Kasana
Updated: 06 Mar 2017 06:46 PM
New Delhi: Vidyut Jamwal’s ‘Commando 2: The Black Money Trail’ showed a rise in numbers than other days’ collection. The film collected around ₹ 6.60 crore on Sunday to its weekend total of ₹ 15.75 crores according to trade analyst Taran Adarsh.

The film had average opening at box-offices in India and collected ₹5.14 crores and ₹ 4.42 crore on its first Friday and Saturday respectively. Movie is probably not doing well as expected by the filmmakers and turning below average. 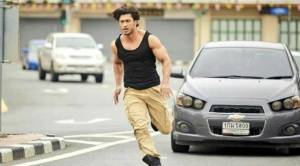 Directed by Deven Bhojani and produced by Vipul Amrutlal Shah Commando 2 is facing tough competition from Hug Jackman’s starrer Hollywood film ‘Logan’ which was released on the same date.