Sara Ali Khan and Veer Pahariya dated each other before the former made her Bollywood debut. The two former lovers attended the screening of SOTY 2 in Mumbai.

By: Filmymonkey Team
Updated: 14 May 2019 04:04 PM
HIGHLIGHTS
New Delhi: Saif Ali Khan and Amrita Singh’s daughter Sara Ali Khan, who made her Bollywood debut with ‘Kedarnath’ opposite Sushant Singh Rajput, has impressed the critics and fans with her acting chops. Although, the star kid is only two-films old, she has won several hearts. The ‘Simmba’ actress is currently busy shooting for Imtiaz Ali’s next co-starring Kartik Aaryan. Sara and several other tinsel town stars including Varun Dhawan, Arjun Kapoor and Malaika were spotted at the special screening of ‘Student of the Year 2’ in Mumbai.

During the screening of ‘Student of the Year 2’, Sara reportedly had an awkward moment with her ex-boyfriend Veer Pahariya.

In case you don’t know, Sara dated Veer Pahariya before making her Bollywood debut.  Veer is the grandson of former Union Minister Sushil Kumar Shinde. During their dating days, cosy pictures of Sara and Veer went viral on social media.

The actress even admitted in an interview that Veer was the only guy she dated.

“He’s the only one I have dated. I have had no other boyfriends in my life,” Sara was quoted as saying on the show ‘Famously Filmfare 2’.

VIDEO: Sara Ali Khan confirms she was dating Veer Pahariya; Reveals he was her only boyfriend!

Now, a report in an entertainment portal suggested that Sara and Veer ignored each other during the screening of SOTY 2. The two former lovers watched the film in the same auditorium.

Veer noticed the actress while he was searching for his seat and Sara also saw him. The two of them didn’t care to say a hello to each other or exchange pleasantries.

When the show ended, Sara bid adieu to the team of ‘Student of the Year 2’, the report in SpotboyE said. 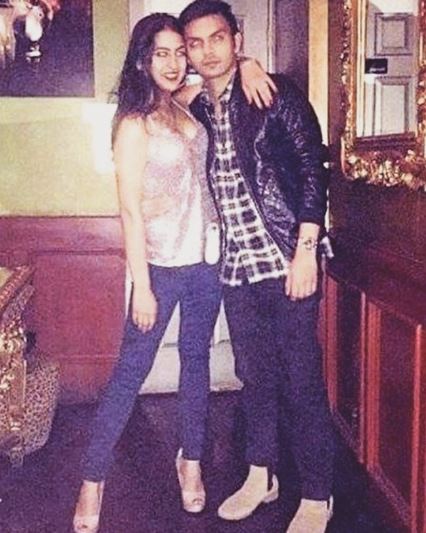 On the professional front, Sara has also signed the remake of ‘Coolie No. 1’ opposite Varun Dhawan. The film will hit the silver screens on May 1, 2020.  Her film with Kartik Aaryan will also release next year.