By: Shruti Srivastava
Updated: 08 Jul 2019 07:38 PM
Esha Deol and businessman husband Bharat Takhtani who recently became parents to their second child, daughter they named Miraya, also celebrated their 7th Wedding anniversary on June 29th. The last time the couple made public appearance was when the took their newborn daughter home from hospital on June 13th, 3 days after her birth on June 10th. In the days to follow, Esha did continue to post on social media and unfortunately did get trolled too for coloring her hair 10 days after Miraya's birth. They also hosted a welcome function for Miraya and the mommy turned traditional donning the South Indian 'Pattu Pavadai' for the occasion. The couple who's already parents to 3 yr old daughter Radhya Takhtani, finally stepped out together for a lunch date this Sunday, after about a month of Miraya's arrival. 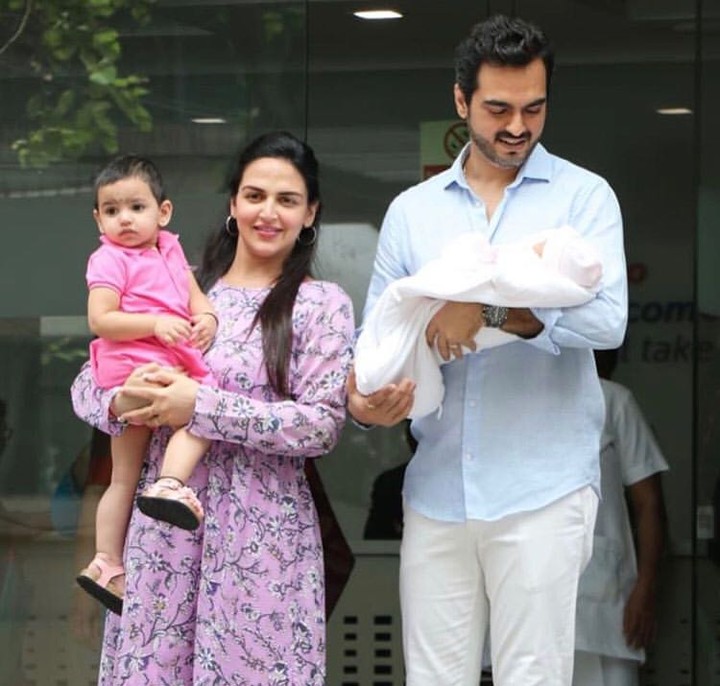 Esha Deol posted a beautiful with hubby sitting at the table holding chopsticks in her flashing a big wide smile while Bharat shared an adorable picture with Radhya who was accompanying them too. Miraya goes missing from the pictures and mommy also tagged only her elder daughter in her Instagram post. The younger child will turn 1 month old day after on July 10th. The couple hasn't yet shared a clear picture of their newborn princess, although we did see her glimpse in hospital pics and then later when grand mother Hema Malini is holding the baby in her hands in a few unseen pictures that surface 3-4 days after.

Bharat wrote with his picture carrying Radhya in his arms - "Sunday fun day with my radhya ❤️#radhyatakhtani".

Last seen in short film 'Cakewalk', Esha Deol is married to Bharat since June 29th, 2012 and as the couple celebrated their 7th Wedding Anniversary, Esha took to Instagram and shared a beautiful throwback picture of them last week while she flaunted her baby bump, captioning it - "As we hold onto each other ever so tight.... through eternity “ Happy [heart emojis] to us us ... [nazar amulet emoji]@bharattakhtani3 #gratitude [folded hands emoji]".