By: Shruti Srivastava
Updated: 04 Jul 2019 07:28 PM
Esha Deol and husband Bharat Takhtani, who celebrated their 7th Wedding Anniversary last week, are also currently enjoying the second time being parents as they welcomed their baby girl, daughter Miraya Takhtani on June 10th. The couple already has a daughter named Radhya Takhtani who was born in October, 2017. While the parents were clicked taking their newborn home from hospital 3 days after her birth last month, more pictures of newborn Miraya sleeping in her grand mother Hema Malini's arms, were surfaced in days to follow that were shared by Esha's gynaecologist Dr. Kiran Coelho. However, everyone missed the picture that Esha shared from the welcome function of Miraya, a week after her birth. Filmymonkey brings you this first. In the picture, cards with "Say Hello to Miraya Takhtani" written on them were put up with the balloons at the function while Esha posed with the ladies of the family, including mom Hema Malini. What drew all the attention of the fans was however Esha's attire. Esha donned the traditional South Indian silk dress 'pattu pavadai' consisting of a skirt and blouse.

Esha in the centre, has female members from husband Bharat Takhtani's family, some friends and mother Hema Malini, posing around her.

Esha's followers loved her traditional outfit and one user wrote - "I love the way u love being a south indian".

Another follower- "Wow i love ur dress"

Another comment read - "That pattu pavadai tho! [heart emojis] wow nice .nobody understands the comfy of wearing it! So cool! [smiley]".

Hema Malini was born in a Tamil family while husband Dharmendra is from Punjab. Both the daughters Esha and Ahana have donned South Indian avatars in the past two. The sisters were in S.Indian look for Ahana's pre-wedding festivities mehndi and sangeet ceremonies too. 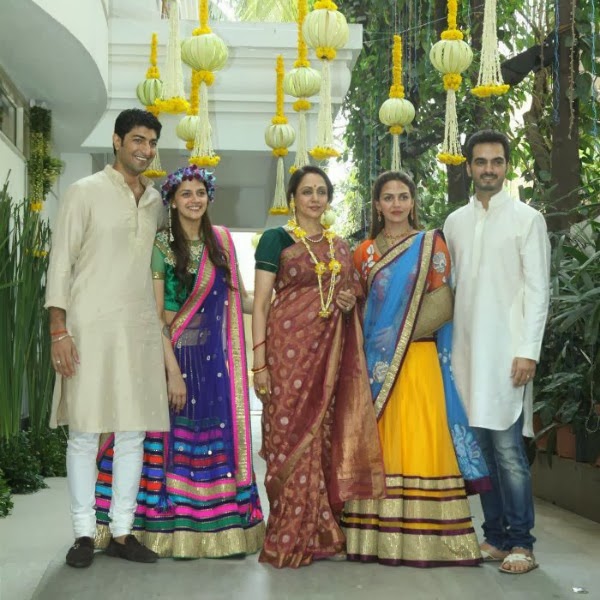 Bharat and Esha had tied the knot on June 29th, 2012 and as the couple celebrated their 7th Wedding Anniversary, Esha took to Instagram and shared a beautiful throwback picture of them while she flaunts her baby bump, captioning it - "As we hold onto each other ever so tight.... through eternity “ Happy [heart emojis] to us us ... [nazar amulet emoji]@bharattakhtani3 #gratitude [folded hands emoji]".

Over a week after Miraya's delivery, Esha was also trolled for posting a picture while getting her hair colored[10 days after delivering baby girl Miraya, Esha Deol gets hair colored; Fans troll her!].