In her latest Instagram post, Esha Deol, who recently gave birth to her second daughter Miraya Takhtani, uploaded a picture of elder child Radhya pulling down her top to take a glimpse at her 'Om' "Teeetooo" inked on backsinde of mom's shoulder

By: Shruti Srivastava
Updated: 29 Aug 2019 09:09 PM
While Esha Deol, who recently gave birth to her second child, daughter Miraya Takhtani with businessman husband Bharat Takhtani, is yet to reveal her face, she constantly posts adorable pictures with her elder child Radhya Takhtani.The mother-daughter duo also hit the headlines this weekend when they walked the ramp together at Lakme Fashion Week Winter/Festive 2019 with mommy looking hot in red top and denim shorts while Radhya looked super cute in a pink tulle frock. Esha also shared these pictures on her Instagram profile. And the latest picture is surely going to leave you smitten by the beauty of it. Esha posted a picture as Radhya checks out her shoulder tattoo 'Om' symbol which is inked beautifuly inside the sun. The cutie pulls down mommy's top to get a glimpse of the tattoo which for her is a “Teeetooo”, reveals the doting mother. Li'l Radhya who will turn 2 in October, has a smile on her face combined with the expression of wonderment as she looks at the tattoo.

Esha captions the picture - “Teeetooo” is what she calls it ???? my jr checking out my #tattoo #momanddaughter#motherdaughter #mybabygirl#radhyatakhtani ♥️????"

Apart from this 'Om' tattoo, Esha has another one covering upper back of her's, the Gayatri Mantra(from Upanishads) inked on the right side. 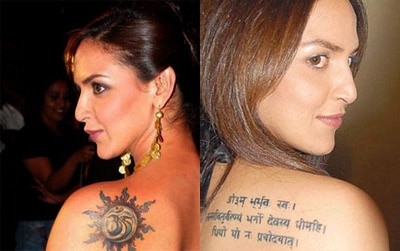 In another social media post Esha made a week ago, the duo were posing together while heading for the Janmashtami celebration twinning in white. Esha donned a white sharara while Radhya was clad in a white frock. Esha wrote with the picture - "All set for #janmashtami Celebrations with my #babygirl #radhyatakhtani ????????#momanddaughter #mommyandme#indiangirls Wearing @pinklotus_fashionstudio@panchhi.couture #gratitude ????????".

And while we eagerly await to have a look at the newborn little sister of Radhya who is currently 2 months old, the doting parents Esha and Bharat had revealed right after her birth on 10th June who she looks like more[Esha Deol reveals why she named newborn daughter Miraya, Husband Bharat Takhani shares who she looks like!].

The fans did however get a glimpse of Miraya in pictures which surfaced days after her birth, sleeping in grand mother(nani) Hema Malini's lap, and also while the 2nd time parents were carrying her home in their arms upon mom's discharge from the hospital 3 days after she was born.