"Can't Be Returned If It Doesn't Have Tag"- Fans Poke Fun At Janhvi Kapoor As The Price Tag Is Spotted In Her Dress In A Viral Video!

By: Filmymonkey Team
Updated: 23 Oct 2019 04:13 PM
Janhvi Kapoor is one of the many Bollywood actresses who's regularly snapped at her gym and pilates class donning different outfits making for great pictures and videos for the paparazzi but she messed up with her latest dress she was wearing in one such videos. Janhvi wearing a yellow salwar-kurta was clicked at her pilates class on Tuesday when the price tag still attached to her dupatta caught fans' eyes. Netizens were quick to spot the fashion faux pas and began cracking jokes about it.

In the video, Janhvi whose upcoming films are 'Dostana 2', 'Gunjan Saxena' and 'Roohi Afza', exits from the class and makes way to the car as the cameras followed her. From behind the price tag was clearly visible hanging through the thread from her chunni.

Before checking out how fans reacted to the video, watch it for yourself first:

The comments section is full of people writing on her dupatta's price tag.

Another wrote: "Did she or her stylist rob that suit from a shop? It has that sensor wala thing attached to dupatta." 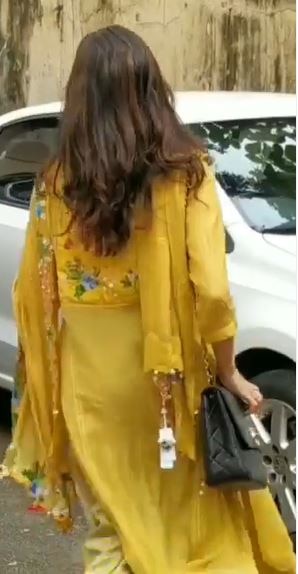 "Myntra return will not pick it up if it doesn't have tag... that's y," a user wrote in jest.

Myntra was quick to respond. A comment was posted on behalf of the fashion e-commerce company on Wednesday. It read: "Flag it, tag it, bag it. Clothes returned without a tag are as good as rag! We don't wanna brag, but if you follow the steps, your return will be without a snag!"

ALSO | Vogue Women Of The Year 2019: From Janhvi Kapoor To Katrina Kaif, Bollywood Divas Who STUNNED In Red Hot Avatar

(With input from IANS)