By: ABP News Bureau
Updated: 05 Aug 2017 09:06 AM
New Delhi: Actor Govinda's uncanny dance moves were the talk of the 90s and it still continues to still enthrall party lovers. A video shared by the actor himself dancing to one of his own numbers ‘Kisi Disco Mein Jaye’ has gone viral and its definitely unmissable.

To add tadka to the hit song is his better half Sunita Ahuja as both recreate the famous chartbuster at a supposed wedding celebration.

The original song had Raveena Tandon shaking a leg with him in the movie ‘Bade Miyan Chote Miyan’. The movie tanked at the Box Office but this song was a hit at every party. (WATCH BELOW)

Meanwhile, Govinda, who had shot a cameo for Ranbir Kapoor and Katrina Kaif starrer "Jagga Jasoos" in South Africa, was upset last month after it emerged that his part has not been retained in the film's final edit.

He was disappointed with the Anurag Basu's decision as he had shot for the film despite not being well and claimed that he didn't charge any amount for doing the brief role . 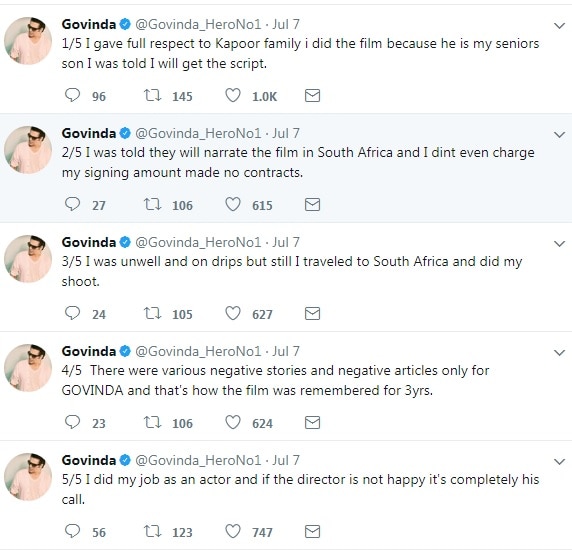 In a recent recent interview, he thanked Rishi Kapoor for taking a stand for him and supporting him.