One of the most versatile actresses of Bollywood, Rani Mukerji is back on silver screen with a bang after a hiatus of four years. She was last seen in Mardani as a fierce cop and now she returned back on screens as a sassy teacher Naina Mathur. As expected Rani has shown her acting prowess in this family drama, the movie is releasing worldwide today and here's the full movie review.

STORY: Naina Mathur(Rani Mukerji) a happy go lucky single woman with Tourette syndrome, is struggling to get a job as a teacher but fails as her tics are beyond her control. Finally, she gets an opportunity and a bigger challenge in the form of tutoring 14 underprivileged students in one of the top schools in Mumbai. How she forms a bond with them and changes their lives battling her own problems is what the movie is all about. 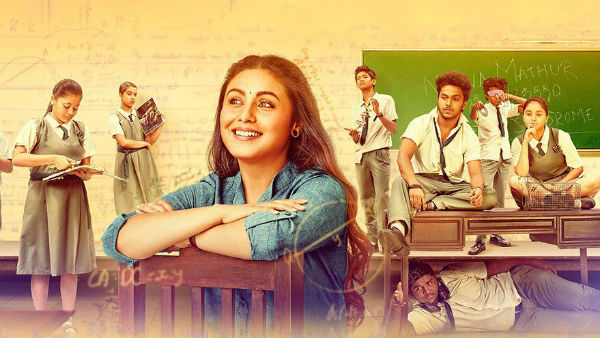 REVIEW: The film is completely owned by Rani Mukerji and she wins with her character the moment she is introduced in the film. Despite of the movie dealing with a serious topic, Hichki sets a light tone right from the beginning. The opening sequence establishes Rani battling with Tourette Syndrome. The actress is effervescent as an aspiring teacher who tries to land a job in spite of having Tourette that affects her vocals. You empathize with her character, as she gives the message that what is the difference between why and why not? And how you can bridge the gap! Positivity can be seen in her face even when she's not saying anything and she gets into the skin of Naina Mathur so well that its take you on a nostalgia trip to your own school days.

Even in the scenes that involves heavy emotional drama she never misses the tic. Other actors in the movie including Sachin and Supriya Pilgaonkar as Rani's parents have played their part well but no one stood in front of Rani Mukerji. The kids playing underprivileged slum kids too have wonderfully done their part, however after interval, the movie looks a bit stretched and the characters caricatured!

Although it is a predictable film, Rani's phenomenal acting makes it worth a watch.The essence of the film is the inconsistent and glaring 'hichki' that can be felt throughout the film. The only flaw in the movie that I felt is that it's a bit stretched and dramatic in the second half.

Overall, the movie is a light family entertainer which you should definitely watch for Rani Mukerji's power packed performance.

Go watch this popcorn entertainer over the weekend.