I did not ask PM Modi to apologise: Anurag Kashyap explains his tweet

By: ABP Live
Updated: 18 Oct 2016 05:36 PM
Mumbai: Filmmaker Anurag Kashyap on Tuesday explained his intention behind his tweet questioning Prime Minister Narendra Modi's visit to Pakistan last year and said he did not "ask the PM to apologise".

Hitting out at the media for playing with his statement for "headlines", Kashyap took to his Facebook page for a lengthy post and said "it is unfortunate that I have to explain my intention behind my tweet, because others and my industry colleagues have to suffer for me having an opinion". 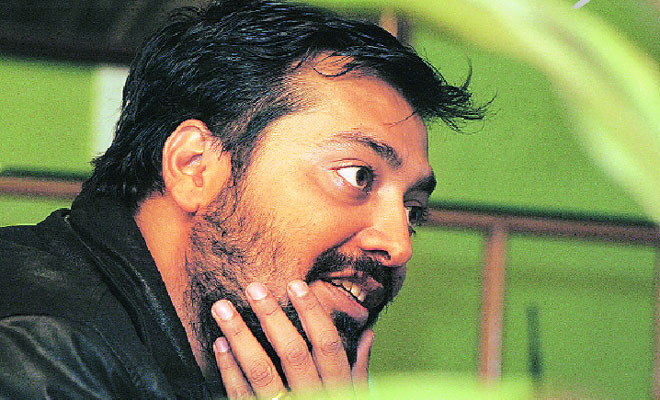 Anurag Kashyap said it was unfortunate he was forced to explain his tweets tagging PM Modi.

"Either way they use us to sensationalise news. Still, I'd rather put my opinions out there on my own platform, then give the media a bite (byte). NO, Anurag Kashyap did not 'ask the PM to apologise' (which most of the headlines would want you to believe, no one has their mind anyways)," he added.
The filmmaker says he just questioned the "fairness in judgement of a situation".

"The PM visited Pakistan for talks at the same time that a filmmaker was working with a Pakistani actor. Neither was aware of future events or mood. Yet only one pays the price," he added.

Kashyap has spoken up after his October 16 tweet -- ""Narendra Modi Sir, you haven't yet said sorry for your trip to meet the Pakistani PM. It was December 25. Same time KJo was shooting 'Ae Dil Hai Mushkil'? Why?" -- caused a stir.

It came amid Cinema Owners and Exhibitors Association of India's decision to not release movies with Pakistani actors, in single screens across Maharashtra, Goa and Gujarat. It's a move that is likely to hit hard Karan Johar's "Ae Dil Hai Mushkil", which features Pakistani actor Fawad Khan.

Kashyap on Tuesday said he understands that "the government did not cry 'ban' or demand that Pakistani artists be sent back, just as I'm aware that the PM himself doesn't censor my films".

"But we elected them and so it is their responsibility to protect us from bullies - media or political parties. And when the governing party's designated members don't respond in hours of crisis because they are second guessing the mood of the PM, then I would rather talk straight to the PM himself.

"There was also sarcasm in the tweet that followed; ‘Bharat Mata Ki Jai' was for those mindless trollers who constantly ask for proof of your patriotism. Apparently that's all it takes. It was a jibe at them. Patriotic slogans don't absolve you from it all. I hope this explains."