By: Shruti Srivastava
Updated: 27 Sep 2019 05:23 PM
"Mere boyfriend ke sath gulu gulu karegi toh dhoptungi na usko" - This dialogue delivered by Alia Bhatt in 'Gully Boy' starring Ranveer Singh in lead role has been one of the most loved ones in the latest years and while it's not easy to imitate it as it is, the legendary Rekha has just done it! The promos of upcoming IIFA Awards 2019 have dropped and one of these feature Alia Bhatt and Rekha's interaction on stage. The beautiful Alia makes Rekha repeat her dialogue after her and the evergreen star nailed it completely by even changing her voice to match with 'Safeena Firdausi' of 'Gully Boy'. The moment Rekha finishes delivering the dialogue, everyone, including Ayushmann Khurrana who was present on stage and Salman Khan who was sitting in audience, were blown by it.

Rekha, who had also presented the 'Best Actress in Last 20 Years' award to Deepika Padukone for 'Chennai Express' during IIFA looked ever mesmerizing in a green and pink saree. 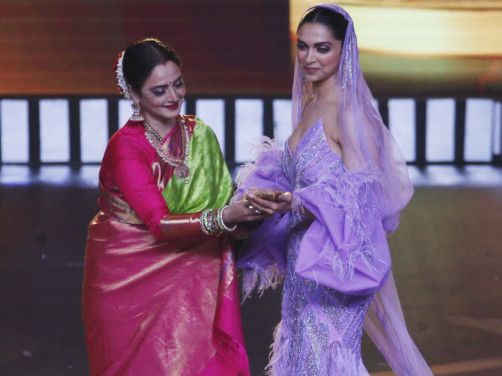