Irrfan Khan's 'Hindi Medium' to release in China on April 4

By: IANS
Updated: 08 Mar 2018 07:29 PM
New Delhi: Amid rumours about the actor suffering from Brain Cancer, there is a good news for Irrfan Khan fans.

Irrfan Khan-starrer "Hindi Medium" will hit the big screens in China on April 4, following the success of movies by Bollywood stars Aamir Khan and Salman Khan in the country.

China has a quota on the number of overseas movies that can be screened in the country each year. But Indian films are finding increased presence there.

For the release of "Hindi Medium", which takes a comical look at the underbelly of India's education system, the Chinese authorities opted for the film's teaser poster instead of the main poster.

ALSO: Film critic Komal Nahta rubbishes rumours about Irrfan suffering from Brain Cancer!
Producer Bhushan Kumar of T-Series said in a statement: "There's a unique twist in this tale. 'Hindi Medium' is content-driven and even though Irrfan is an internationally recognised talent, the Chinese distribution body opted for our teaser concept which shows the feet of a man, one representing poverty and the other representing material wealth."

The poster reflects the disparities in society and as the film "Hindi Medium" does, the image holds a mirror up to our society where the ability to speak fluent English is ignorantly considered a yardstick to measure sophistication and elitism.

Producer Dinesh Vijan of Maddock Films said: "This is exactly what made 'Hindi Medium' so significant. The idea that we give importance to material wealth and our social image over the value of humanness and love baffles me, but sadly it's what drives most of society and portraying this in a light yet meaningful form is what resonates with audiences universally." 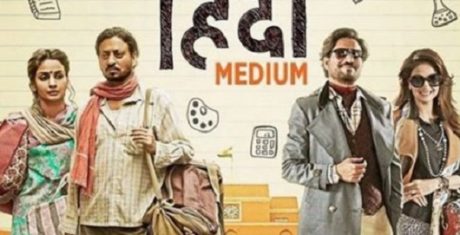 Of late, Aamir's "Secret Superstar" and Salman's "Bajrangi Bhaijaan" -- the actor's first movie to release in China -- have done well in the country.

According to film producers and distributor, the Chinese audience is receptive to Indian stories irrespective of whether a movie features a 'star'.

At the recently concluded Ficci Frames 2018, there was a discussion on the appeal of Indian films in China.

On whether Aamir's popularity is working in favour of his films, Prasad Shetty, Director, China Peacock Mountain Group, said: "I know people are talking about his popularity in China, but the fact is that he really worked hard to connect with people of China. He went there, interacted with people and that makes a difference to earn popularity.

"However, I believe that the audience in China always connects with our stories. I have been living in China for eight years and most of the cab drivers can sing Raj Kapoor's 'Awaara hoon'. So, the Bollywood fans in China have existed for a long time. We are only exploring the market now."

Seconding this, Ajit Thakur of Eros Entertainment, said: "All of our films are working there... 'Bajrangi Bhaijaan' features Salman Khan, and that film is also working very well at the box office over there."

When asked if only big budget films work in China, Shetty said: "Hindi Medium' will release in China. That is a content-heavy film."