The 'Fireworks' hitmaker has reached the milestone amount of fans on the social media site, followed by Justin Bieber, who has 96.7 million followers whilst Barack Obama (90.8 million), Taylor Swift (85.1 million) and Rihanna (74.1 million) placed third, fourth and fifth respectively. 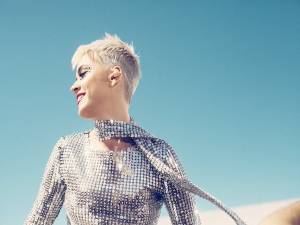 To celebrate Perry's achievement, the website posted a video compilation of her tweets since she joined in 2009 along with a message saying, "Today, we #WITNESS history. Congratulations @katyperry, the first to reach 100 million followers!".

The ' Chained to the Rhythm' singer joined Twitter in 2009 and has sent out about 8,500 messages since.