By: ABP News Web Desk
Updated: 12 May 2017 10:12 PM
NEW DELHI: Anil Kapoor's son Harshvardhan Kapoor and Saif Ali Khan's daughter Sara Ali Khan have been rumoured to be romantically involved since past couple of months. The rumour mills were abuzz after reports of duo walking hand in hand on a dinner date started doing the rounds. It was also mentioned that that they allegedly called each other 'baby'.

Now, a new picture of the alleged couple has sent internet into a meltdown. The lovebirds were spotted munching burger in Bandra, Mumbai. This is three days old picture when the entire Mumbai was dancing to the tunes of Justin Bieber. 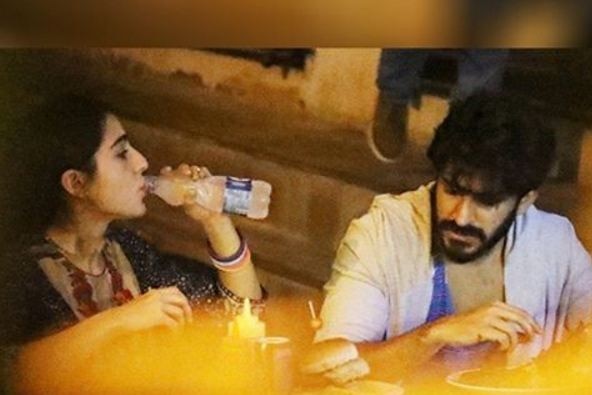 Earlier, Harshvardhan took to Instagram and shared a snap where a girl can be seen walking towards the beach. It was not the photograph but mysterious caption that left people puzzled. "Find beauty in everyday life and let it inspire you. Don’t forget to capture these frames and mark them as memories forever. You can always use your loved ones as subjects but keep them a mystery nonetheless.” However, when people started speculating that it was Sara in the picture, Harshvardhan decided to delete the post, which kind of added more fuel to all the rumours," wrote the 'Mirzya' actor. As soon as people began speculating the mysterious girl to be Sara Ali Khan, the actor deleted the post. This added duel to the fire.

On the work front, Harshvardhan will next be seen in Vikramaditya Motwane's 'Bhavesh Joshi' while Sara is rumoured to be making her Bollywood debut soon either with Dharma Productions or Salman Khan.