Close on the heels of the Yash Raj Films (YRF) movie "Qaidi Band" comes "Lucknow Central" -- a film with an identical premise and story line. But unlike the YRF film, this movie, about a victim of circumstances, lacks a soul. 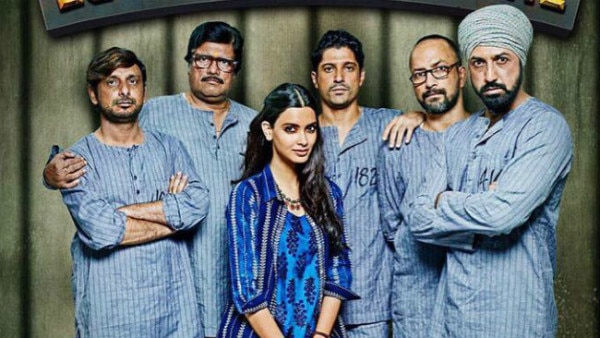 Claiming to be inspired by true events, the film follows the establishment of the real-life band, Healing Hearts, which was formed in 2007 at Lucknow Central Jail.

Unfortunately here, the narrative focuses more on emphasising on the title which happens to be the location where the story is set.

The story revolves around Kishen Mohan Girhotra, a singer-cum-musician based in Moradabad. That he is a singer is told to the audience by his enthusiasm of creating a CD cover which he plans to hand over to a well-known local singer, Manoj Tiwari.

After the failed attempt of handing over the CD and being ruffled by an IAS officer, Kishen is accused of murder of the IAS officer and is sent to the local jail. This forms the prologue, which is rather lengthy and unwarranted.

The next half hour delves into Kishen's transfer from Moradabad Jail to Lucknow Central Jail. And during this phase, the Uttar Pradesh Chief Minister (Ravi Kishen) plans to have a band created at Lucknow Central Jail. He compels the Inspector General of Police (Veerendra Saxena) to carry out his orders.

Reluctantly, the IG ensures that the jailor (Ronit Roy) of Lucknow Central Jail follows instructions after he is prodded by Gayatri Kashyap (Diana Penty), an employee of an NGO working for the reformation of criminals.

The plot gets convoluted when Kishen claims: "Band banane nahin aaye hain, plans kuch alagh hai". And later, how he bands his fellow inmates, forms the crux of the narrative.

The story and screenplay, credited to Aseem Arora and Ranjit Tiwari, is designed as a hero's journey. In their attempt to glorify the actor Kishen, the tale gets slanted with over-dramatic and atmospheric scenes.

On the performance front, every actor is pitch perfect, except for Farhan Akhtar who slips in and out of his character. In fact, his demeanour, gait and dialogue delivery is more Farhan Akhtar, a guy born with a silver spoon than that supposed to be of a struggler like Kishen.

He is aptly supported by his team of musicians which consist of Deepak Dobriayal as Victor Chattopadhyay, the Bengali engineer; Gippy Grewal as the Sikh Parminder Singh Gill; Rajesh Sharma as Purshotam Pandit; and Inaamulhaq as Liyakat who is also addressed as "Dhikatbhai". They are all earnest and natural with their performances.

Ronit Roy as the jailor, Ravi Kishen as the Chief Minister and Veerendra Saxena as the IG of Police, all have their moments of onscreen glory.

Diana Penty as Gayatri Kashyap is wasted in a prominent but largely underwritten role.

Tushar Kanti Ray's camera work is commendable. While the narrative is slow and lumbering, it is Arjunna Harjaie's background score that keeps the adrenaline soaring. The song in the climax along with "Ek kabutar, do kabutar, teen kabutara" are well picturised and they mesh seamlessly into the narrative.