Lungi dance, aging issues: How SRK held Canada in awe with his TEDTalks

By: ANI
Updated: 28 Apr 2017 07:03 PM
New Delhi: Shah Rukh Khan is second to none when it comes to bringing the house down with his witty one-liners, sense of humour and an inherent charm.

Becoming the first Indian actor to address a TED conference in Vancouver, SRK spoke on a host of topics ranging from aging process and humanity to his films. But what served as the icing on the cake was the special 'lungi dance'.

"For years, I've been a huge fan of TED Talks. There are so many people in India who would like to come out with their ideas and thoughts, and speak them in Hindi," SRK said.


Thank u @TEDTalks @TEDchris @julietrblake for a wonderful time. All who came to lov me in Vancouver…my lov 2 u. pic.twitter.com/FJD3yWgxsQ

The 'Raees' star also announced that he would be hosting the new TED show in India and that too, in Hindi.

.@iamsrk announces new @TEDTalks India show he'll be hosting in Hindi. His talk was a big hit at #TED2017 pic.twitter.com/gNrFri7gmq

The superstar may be aging, but that surely doesn't seem to bother him much.
"Aging is not a problem to fix or a disease to be cured. It is a powerful, lifelong process that unites us all," SRK opined, adding, "why should 'aging well' mean struggling to look and move like younger versions of ourselves? Ageism feeds on denial, our reluctance to acknowledge that we are going to become that older person." 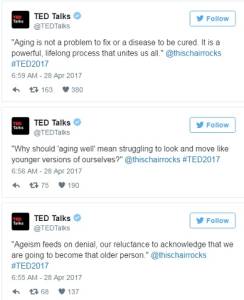 Be it his speech at the Edinburgh University or the Dhirubhai Ambani International School, SRK is well-known for his philosophical yet quirky takes on life and the lessons it gives.
"Humanity is a lot like me. It's an aging movie star, grappling with all the newness, wondering whether she got it right," the actor shared, adding, "we had expected an expansion of ideas and dreams, not bargained for the enclosure of judgement."

The highlight of the show, however, was the 'lungi dance' - a routine the star has been following ever since he and Deepika Padukone danced to the peppy number in the promotional video for his movie ' Chennai Express'.

For the unversed, TED Talks is a series of influential conferences and videos, where expert speakers talk about new ideas revolving around education, business, science, life, technology and much more.