Secret Superstar is all about a mother and her daughter's unconditional love that deals with an aspiring teenage singer who faces roadblocks in fulfilling her dream.When Aamir Khan backs a film you expect nothing less than a quality movie! Based on the backdrop of  Gujarat, the movie takes you on an emotional roller-coaster ride where in you smile and get teary eyed at the same time.

STORY:  Insia(Zaira Wasim) is a 15-year-old school-going girl from Vadodara who lives with her loving mom Nazma (Meher Vij), a strict father Farookh (Raj Arun), a cute little younger brother and an old badi aapa. Insia dreams of becoming a top singer, no wonder she is talented singer who has a beautiful voice. Her mother always supports her dreams as much as she can  but her father is thoroughly against the idea due to his conservative mindset. Insia takes to the internet and posts videos of her singing wearing a burkha, she makes sure only her eyes are visible in order to keep her identity a secret and hence becomes a 'secret superstar' as her videos go viral. In-fact it reaches out Shakti Kumar (Aamir Khan) a brash, lecherous and once a successful music composer. With a little help from her best friend cum boy friend Chintan(Tirth Sharma), Insia gets a chance to meet Shakti in Mumbai and what happens next is the story of Insia the 'Secret Superstar'. 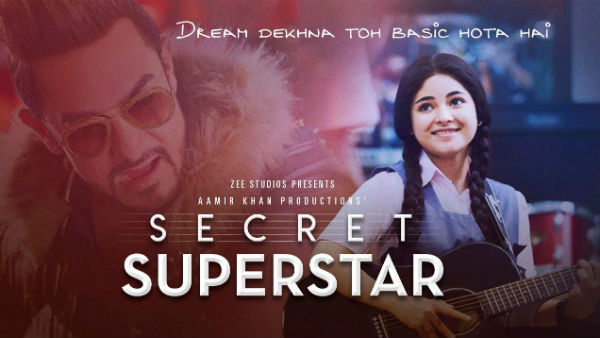 Well, nothing is new in the movie, be it a girl batting for her dreams or a housewife being beaten by her conservative husband almost every day. However what makes ' Secret Superstar special is its gripping plot and narration, supported by some talented supporting cast other than leading lady Zaira Wasim .

Director, Advait Chandan handles the subject in a very sensible manner keeping the sensitivity in mind. The film is a mirror to the conservative attitude that exists in our society and also deals with women empowerment.

The movie not only deals with an aspiring singer fulfilling her dreams but also beautifully narrates an unconditional love between a mom & daughter. Many scenes between Zaira and Meher leaves you moist eyed and you feel the pain and happiness shared by the mother-daughter duo.

ACTING: Zaira Wasim outshines everyone in the movie, after Dangal, the young girl once again proves that she is a powerhouse of talent and wins you over with a heartfelt act. Aamir Khan is the scene-stealer, his character as a crass Bollywood music director from the 80-90s is someone who you try to hate but end up falling in love with him. However the actor lets Zaira shine in the movie and takes a back seat this time. Meher Vij as Nazma the submissive wife is brilliant and proves her acting prowess without saying at times. Also Raj Arjun as a villainous father is in tremendous form.

Amit Trivedi's music is pleasing and acts as a soothing balm to cope up with the emotional scenes. Main Kaun Hoon' is the best however my personal favourite is 'Meri Pyaari Ammi'.

Overall, the movie has every aspect that makes it special and a must- watch. A beautiful story, supremely talented actors and soulful soundtrack 'Secret Superstar' is a complete package that you should not miss!