By: Filmymonkey Team
Updated: 29 Jun 2019 01:53 PM
Arjun Kapoor and Malaika Arora have been holidaying in New York since early this week and the sizzling actress even wished "my crazy,insanely funny n amazing @arjunkapoor" a Happy Birthday with a romantic picture of them finally confirming their relationship on public platform. The cosy picture created a lot of buzz and also came along some trolling for the couple over their age gap[Malaika Arora Trolled For Romantic Birthday Post With Arjun Kapoor, Kavita Kaushik says "Anarkali !! Kick Open That Brick Wall as well as some poking noses too!"]. Undeterred by the negative attention, the love birds are totally nailing their vacation constantly updating their social media profiles too. The latest pictures surfaced on social media reveal that the couple also has company in NYC.

'India's Most Wanted' actor's chachu Sanjay Kapoor along with his wife Maheep Kapoor and son Jahaan Kapoor have also joined the duo in NYC and the uncle and aunt have shared some very pretty pictures of the family with Malaika.

Maheep shared a beautiful picture of Arjun-Malaika posing with her son Jahaan.  She captioned it "Jai Hind[heat emoji]". That is to refer to the trio's tricolor combination of Orange, White and Green.

Sanjay Kapoor also shared two pictures featuring himself too with them. These also prove that Malaika has very comfortably become the part the Kapoor family as she strikes a goofy pose with Arjun, Sanjay and Jahaan sticking her tongue out and flashing the victory sign with hands.

Arjun dons orange t-shirt and black pants with a cap, Jahaan dons a white tee and red shorts, Malaika is seen in neon green co-ords and Sanjay in a floral-printed shirt with tee inside and denims.

Sanjay captioned these pics just with a "[heart emoji]".
[swipe to view both pics]

And here are some pictures posted by Arjun-Malaika:

Before it was revealed that Sanjay and family are also with the duo, uncle had teased Malaika in his comment on her post. He wrote reacting to the other picture - "Who clicked the picture [fun emojis]". 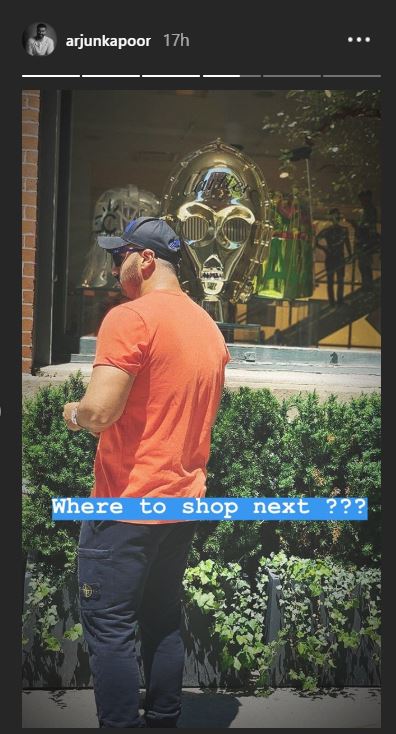 ALSO - rjun-Malaika GET COSY as they party with Kareena, Maheep Kapoor & others! PICS INSIDE!