By: Filmymonkey Team
Updated: 04 Jan 2019 05:01 PM
Priyanka Chopra and Nick Jonas are currently honeymooning in Switzerland and while the newlyweds get romantic kissing away celebrating New Year's along with family members, here are some fresh updates on their gala wedding that took place in Jodhpur's Umaid Bhawan on 1st and 2nd December last year. Priyanka's christian wedding gown by designer Ralph Lauren stole the limelight and it's long train made headlines worldwide. It was told that the white exquisite dress did even have some words incorporated in it that were chosen by the bride herself.


In an exclusive new article, #RLMag looks back on the story of timeless romance and style that culminated one month ago today at the wedding of Priyanka Chopra and Nick Jonas—both wearing custom looks designed by Ralph Lauren. . "This isn’t about a dress," Mr. Lauren says. "It’s about a woman and a moment. Priyanka knows exactly who she is, and so I wanted the dress to reflect, not only her love story and the romance of India, but also her unique sensibility: strong, smart, and beautiful." . Read more at RLMag.com, or visit bio link. . Photography: @JoseVilla . @PriyankaChopra #PriyankaChopra #NickJonas #PriyankaAndNick #nickyanka #RalphLauren #RL50

The official handle of Ralph Lauren has just posted new videos of Peecee's gown and finally gave a glimpse into what these beautiful words looked like, on the dress.

The official website shares details about the dress saying  - "At Priyanka’s request, eight special words and phrases were incorporated into the embroidery pattern of the coat, including “Hope” and “Compassion,” as well as a Hindu mantra, “Om Namaha Shivay,” and “December 1, 2018,” the date of the ceremony. The placement of the groom’s full name, Nicholas Jerry Jonas, at the front of the coat was mirrored on the back by the names of her parents. (A piece of lace from the dress Nick’s mother wore at her own wedding was also sewn into the pattern.) “Family” scrolled along the right sleeve, where Priyanka has a wrist tattoo reading “Daddy’s Lil Girl…” And, finally, just over her heart, the word “Love” was stitched in ivory thread."

Take a look at them in the videos below that were posted with details in their captions.

The first video was posted with caption: "Mr. Lauren began the months-long design process by showing Priyanka Chopra sketches for her custom gown, which combined the glamour of a sequin-embellished strapless dress with the romance of a sheer, hand-embroidered coat.
.
The look was emblematic of some of the formalwear codes he has always highly regarded: a silhouette skimming the body while simultaneously seeming to float away from it; a play between sheer and opaque; and, of course, intricate, handmade details.
.
Read more at RLMag.com, or visit bio link.
.
@PriyankaChopra #PriyankaChopra #RalphLauren #PriyankaAndNick#NickJonas #RLMag #RL50"

Message along with the second one read: "The bespoke gown Ralph Lauren created for Priyanka Chopra's wedding to Nick Jonas exemplifies the highest levels of exquisite, meticulous handwork.
.
Fifteen artisans in Mumbai, India, hand-embroidered the coat with a variety of complex techniques, from fine cording to tulle appliqués and pastiche threadwork inspired by Chantilly lace, for a total of 1,826 hours. Worked into the scrolling floral motifs were 32,000 pearlescent sequins, 5,600 seed beads, and 11,632 Swarovski crystals. The coat was closed down the front with 135 satin-covered buttons and finished with scalloping at the high-cut neck and long sleeves. The strapless column dress worn beneath was embellished with more than two million pearlescent sequins to bring a sense of shimmering dimension to the overall look."

The last and the third one was posted with the caption: "One of the fittings for Priyanka Chopra's wedding dress was held in Paris, where she saw the full look come together for the first time, complete with a veil.
.
The sweeping, 75-foot veil she wore on the day of the ceremony was actually comprised of two different cuts of tulle—a shorter fingertip-length veil worn under the epically longer one, which was carried behind the bride by six attendants."

And here are close looks at the some of these words: 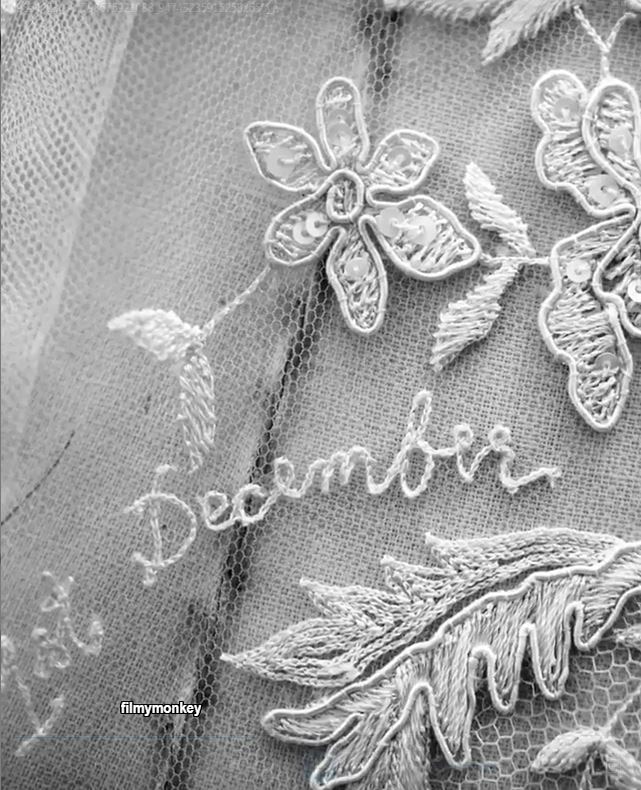 Priyanka Chopra chooses word 'compassion' among the 8 words that were stitched on her Ralph Lauren gown for her Christian Wedding (Pic: Instagram Video Screenshot ) 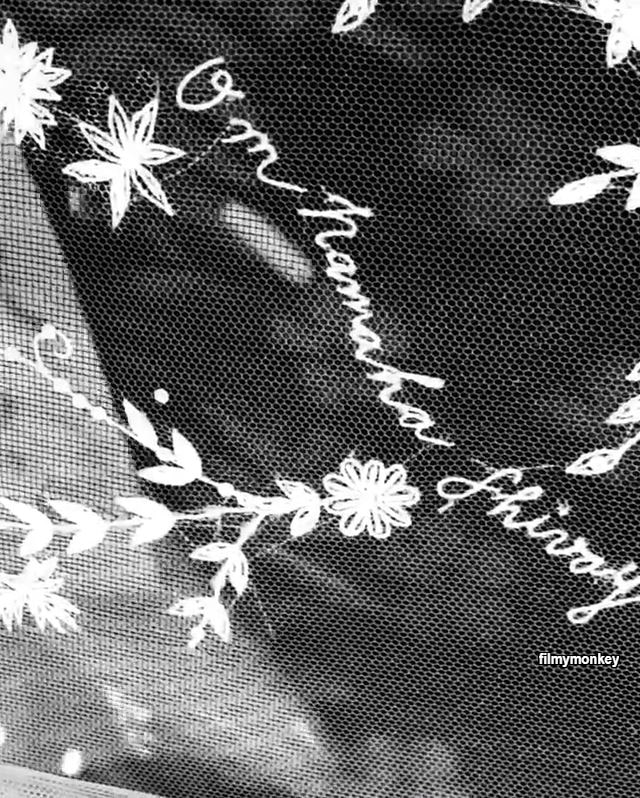