Amy Jackson and her fiance George Panayiotou are expecting their first child together.

By: Filmymonkey Team
Updated: 08 Sep 2019 09:32 PM
New Delhi: Bollywood actress Amy Jackson, who was last seen in Rajinikanth and Akshay Kumar starrer ‘2.0’, is all set to welcome a little bundle of joy into the life. The soon-to-be mommy and her fiancé George Panayiotou are eagerly waiting for the arrival of their first child. From going on a road trip to posing topless, Amy has grabbed eyeballs throughout her pregnancy. The beautiful actress is enjoying her pregnancy phase to the fullest and she keeps on sharing photos flaunting her baby bump.

Amy’s beau George Panayiotou turned a year older on September 7. The actress shared a picture with her fiancé to wish him on his birthday. She wrote, ‘’ Happy Birthday to my ride or die. Roll on to becoming a Mummy & Daddy! LoveYou.’’


Happy Birthday to my ride or die. Roll on to becoming a Mummy & Daddy! LoveYou ????

Amy shared another photo with George on her Instagram story in which she can be seen hugging George. The pregnant actress looked pretty in a black dungaree as she flaunted her baby bump. 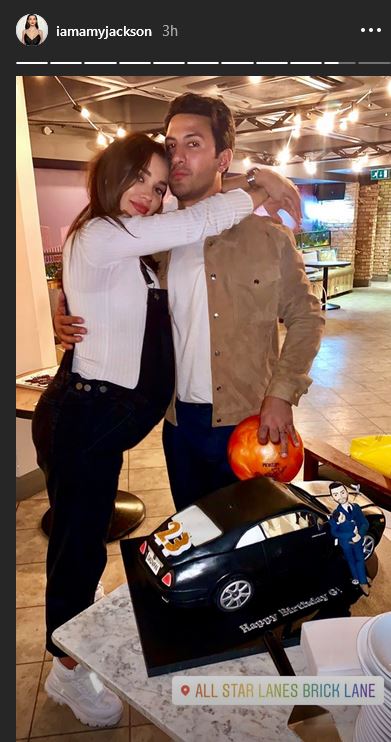 
The Baby Shower of Dreams by the fabulous @_alexandra_pisani & @corinthialondon team✨The most beautiful afternoon celebrating my Baby Boy with best friends and Family. He’s one lucky boy to have so many amazing women in his life ???? Thankyou for the STUNNING flower arrangements @byappointmentonlydesign ✨???? Feeling very blessed ???????? Memories to last a lifetime shot by @milliepilkingtonphotography for @hellomag

Amy recently revealed the gender of her child. She confirmed on Twitter that she is having a baby boy, whom she will name after her fiance’s grandfather.

Amy and George exchanged rings on May 5 in London in the presence of their loved ones. Fans are now waiting to see the two lovebirds walk down the aisle soon.

On the professional front, Amy made her Bollywood debut with 'Ek Deewana Tha' opposite Prateik Babbar in 2012. She also featured in ‘Singh Is Bling’ opposite Akshay Kumar.