Their expressions took Internet by storm and this made this young jodi gain star status with their social media following shooting up miraculously. Priya today boasts over 5 million (50 lakh) followers on Instagram page while Roshan also with his charms, has girls drooling. He has over 9 lakh followers.

ALSO - Roshan, the boy from the Viral Girl Priya's video is a SRK fan & we are not surprised!

Within days of this video, the duo got back with another teaser and this time the school children were seen seated inside the classroom and Priya Warrier's loading-gun-in-the-air-and-firing-at-Roshan-with-a-kiss moment yet again stole hearts.

Not only common people but many celebrities were also bitten by the Priya-Roshan bug and and have been copying both their viral videos for fun. The latest in this latest is singer Neha Kakkar.

The 'Kaala Chashma' singer had taken to her Instagram profile 5 days ago to post her video where she imitates Priya P. Varrier's expressions loading a gun and firing. She wrote with the video - "#PriyaVarrier Effect on Me.. ♥️????
P.S. “Gun Ulti Ho Gayi”????‬ #NehaKakkar #OruAdaarLove"
Watch this first...

Now imagine Roshan giving his famous expression on this? It happened! The guy from the viral video picked up Neha's video, and putting it on split screen with musical.ly App he created this magical duet moment where the bubbly Neha fires at him and he swoons by placing his hand on his heart in the same manner.

Do you need ask what it did to fans? Yeah! It is blowing them away.

Not only this, Neha and Roshan had a conversation over it too.

Neha obviously learnt about this and she commented on Roshan's post - "Oye! What a surprise Roshan :) We loved your expressions as much as we loved Priya's.. All the best to the whole team.."

Roshan replied simply to her with - "thank you" 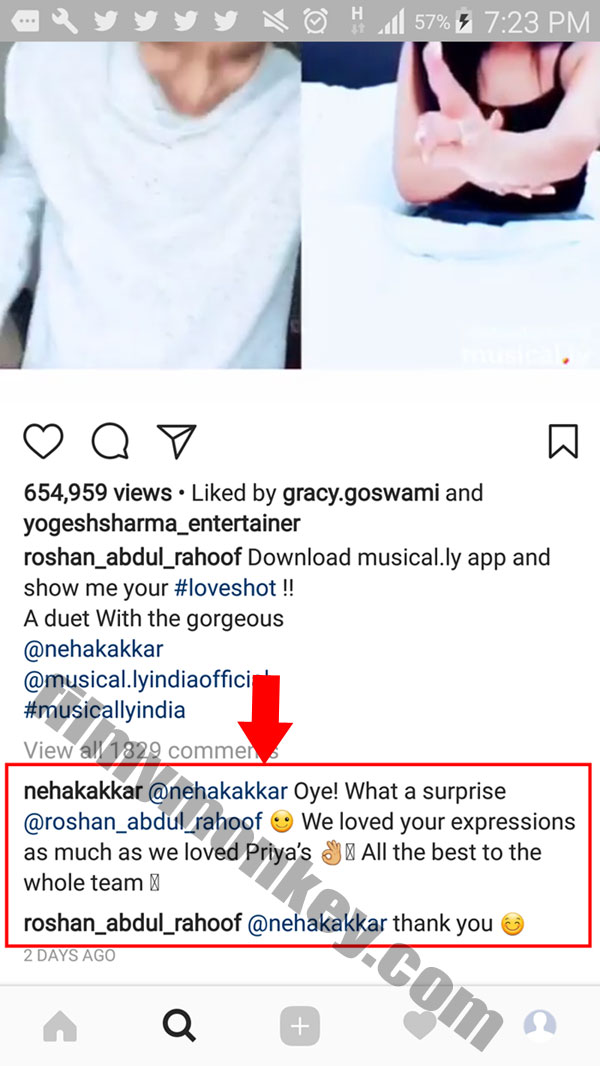 Isn't the 'Oru Adaar Love' fever spreading like anything! Btw, looking at the success of this particular video, Roshan has invited fans/followers to record duet with him through Musical.ly App too.

Download musical.ly app and duet with my #Loveshot !!! You guys made me what IAM today so here’s an opportunity for all my loved fans to do a duet with me . @priya.p.varrier @noorin_shereef_ @musical.lyindiaofficial #musicallyIndia

Directed by Omar Lulu, Priya-Roshan's 'Oru Adaar Love' is scheduled for Eid 2018 release and there were also reports that it might get dubbed in hindi too.

Who's waiting??? Do leave us your comments below! And stay tuned for all updates!