After making appearance at Ambanis Ganesh Chaturthi celebrations along with South actress Neelam Updhyaya, Peecee's younger brother Siddharth Chopra hit headlines with speculations made over his relationship with her and now the latest pictures posted by him from his Birthday party featuring Neelam are adding fuel to the fire

By: Shruti Srivastava
Updated: 05 Sep 2019 05:45 PM
Ever since Siddharth Chopra, the younger brother of Bollywood actress and global star Priyanka Chopra, made an appearance with a 'mystery woman' who turned out to be Kannada actress Neelam Upadhyaya, rumour mills are abuzz that the two are indeed dating. It was him himself who tagged her in his Insta-story in hours to follow and told the world that his beautiful lady was Neelam who primarily works in Tamil and Telugu films. The two made headlines by getting papped at Ambanis Ganesh Chaturthi 2019 celebrations 2 days ago. Opening up further about his 'relationship' with Neelam, Siddharth just took to his Instagram and shared throwback pictures from his 30th Birthday bash held 2 months ago in July. Yes, Neelam was very much part of this small-private gathering which was also attended by TV couple Puja Banerjee-Kunal R Verma, VJ Anusha Dandekar and Siddharth's mom Madhu Chopra. 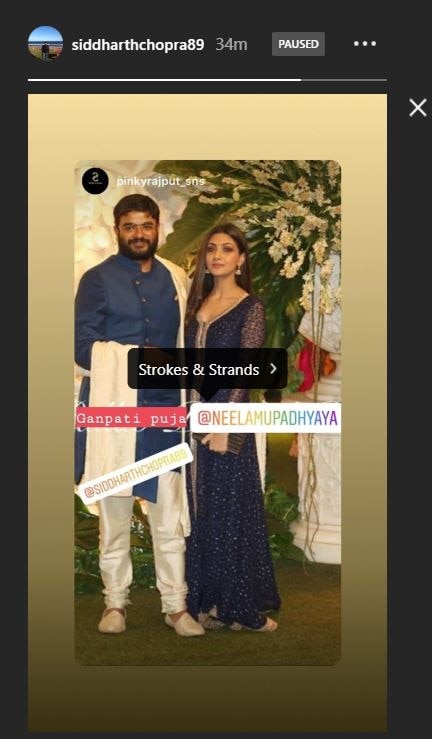 Siddharth captioned the first picture posing with Neelam, Kunal and Puja- "Birthday Celebrations be like... #dirtythirty. Amazing having amazing people. Blessed☺️". The post is geo-tagged to Juhu, Mumbai.


Birthday Celebrations be like... #dirtythirty. Amazing having amazing people. Blessed☺️

In the next picture, the whole group poses together, with Madhu Malati donning the same floral printed kurta that she can be spotted donning in his Birthday post she made in July to wish her son a "Happy Birthday" too. This pic was originally posted by Neelam on her Insta-story.

He wrote in message with this picture - "Crazy 30. #dirtythirty... life’s greatest gift is having family and close friends. Great start into my thirties????".


Crazy 30. #dirtythirty... life’s greatest gift is having family and close friends. Great start into my thirties????

Mommy Madhu Malati had shared a cute picture with Siddharth on July 13th on Instagram wishing him on his 30th Birthday donning the same attire.

And these pictures prove that the two have known each other for a while and indeed grown closer with time. We have to wait for the final confirmation though.

Siddharth, whose marriage with his fiance Ishita Kumar was called off few days before it was to take place the last week of April, hit the headlines with dating rumors after they made a 'couple entry' at Mukesh Ambani's Ganpati Puja celebration on 2nd September. Siddharth then posted a picture featuring him and his companion at the function on Instagram story, but later deleted it. It turns out Siddharth's date was Neelam, who is known for her work in films such as "Mr. 7", "Action 3D" and "Unnodu Oru Naal".

For the unversed, Siddharth was all set to get married to Ishita Kumar in the last week of April. However, their wedding got cancelled few days before the scheduled date. Priyanka & Siddharth’s mother Madhu Chopra had said that the marriage was mutually called off. They had their traditional roka ceremony on February 27 in Delhi which was also attended by Nick Jonas and Priyanka had also shared the pictures from the function welcoming Ishita into the family. And later while revealing the real reason for calling off the marriage, Madhu had told a portal that her son was not ready for marriage yet and there were compatibility issues.