Roshan, the boy from the Viral Wink Girl Priya Prakash's video is a SRK fan & we are not surprised!

By: Shruti Srivastava
Updated: 13 Feb 2018 09:58 PM
It started from social media...then it hit the headlines on the online portals-websites and then moved on to the national news channels. That means now the whole nation recognizes that one face which in a school dress, deep kohled eyes, one-sided hair plait and the naughty wink ruled over the hearts overnight...Priya Prakash Varrier.

But what cannot be ignored, is the boy featuring in the 'Oru Adaar Love' video opposite this 18 yr old Malayalam girl and who melts adorably when she winks leaving him blushing at the end of their cute eye flirting.

The boy named Roshan Abdul Rahoof (also Mohammed Roshan) may not have gained much attention but his female fans are going ga-ga over his super-adorable reaction in the video.

And guess where his charms come from?

It's none other than the Bollywood superstar Shah Rukh Khan.

Yes, while his leading lady from this Malayalam film has left Bollywood actor Arjun Kapoor smitten[Arjun Kapoor is the new fan of the VIRAL winking girl Priya Prakash Varrier; Follows her on Instagram!], he is a huge fan of the King of Romance SRK and this is proved by his Instagram page.

Roshan currently follows all of 63 people on Instagram while his followers have increased rapidly to 3.38 lakh in the past three days...courtesy Viral Video. And when we scrolled down the list of people he follows here, we found only one name from Bollywood there and that was our own Shah Rukh Khan.

Having joined the online photo sharing platform 3 years ago, SRK was one of the first 25 people Roshan chose to follow here, and the only one from Bollywood. While working on this article, another video was released from their malayalam film 'Oru Adaar Love' and this time Priya sitting in the class room with Roshan chooses to 'shoot' Roshan with a kiss...[WATCH! Priya Prakash Varrier RETURNS! ‘Shoots’ Roshan with a KISS in ‘Oru Adaar Love’ official teaser!]leaving him floored yet again!

Also a dancer, Roshan is blessed with good looks and a charming smile and we guess the heart melting expressions he gave in the video to Priya has to be the contribution of his fav, SRK! 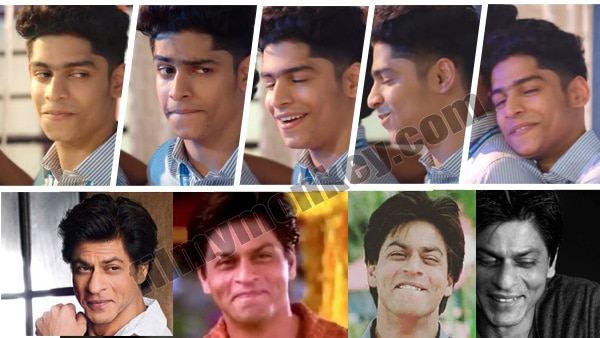 Roshan Abdul from Priya Prakash's viral wink video is a huge SRK fan as he follows only him from the entire Bollywood celebrities list on Instagram.

Ahem! With the fame these two young actors have got, do we see them working in the Films or TV at Bollywood anytime soon?