'Rustom' REVIEW: Akshay Kumar starrer is INTRIGUING but not ENGAGING!

Based on a true incident that occurred in 1959 in Bombay, "Rustom" is a fictionalised crime drama that unfurls the tale of a patriotic Naval Commander Rustom Pavri, who kills his wife Cynthia's paramour Vikram Makhija, after stumbling upon their love affair. 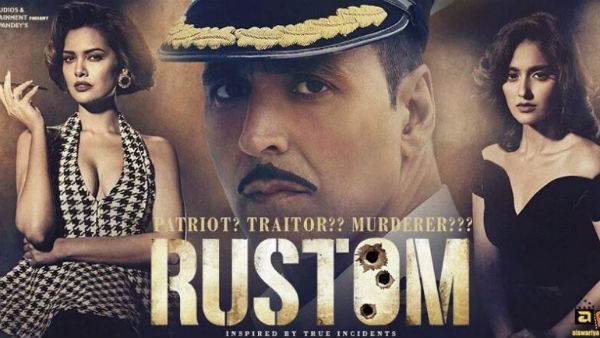 The debate, whether the killing was a premeditated murder or an act of self-defence, forms the base of this two and half hour plus film.

Being an often heard story as the K.M. Nanavati case versus State of Maharashtra, script writer Vipul Rawal offers nothing that is not available on the public platform. The film thus lacks a novelty factor.

The sub-plot, which is introduced forcefully, to give a patriotic slant to Rustom's character and justify his action, is predictable and hackneyed.

Humour in the film is injected in the dialogues in the court room scenes and offers a small measure of relief in an otherwise drab narrative.

Director Tinu Suresh Desai manages to transport his audience to that period in Bombay, by recreating the era with the right hint of sepia tones, coiffured hair, high waist pants, albeit a bit too synthetically.

Rustom actress Ileana D Cruz OPENS UP about her ex-boyfriends!

He succeeds in keeping alive the intrigue factor, in a story that is not entirely new, but it is the slow pace of the film in the first half which drags, that is it's actual undoing. Viewing becomes tedious after a point especially with the repetitive flashbacks.

The second half starts with a promise in the court room and although there are a few minor twists, these do not manage to engross you too much or make you sit at the edge of your seat. The film had the potential to be racy and thrilling, but that opportunity is sadly left unexploited.

The scene where the jury deliberates over the outcome of the case is amateurishly handled and looks extremely tacky.

The music meshes well with the narrative, although no song is truly memorable.

Akshay Kumar slips into the shoes of Rustom Pavri with earnest conviction. He is every inch the patriotic Naval Commander and a husband who is passionately in love with his wife. With his measured speech, mannerisms and a dignified composure, he nails it in the courtroom scenes.

Ileana D'cruz as Cynthia Pavri, is competent and manages to look the character too. She is full of remorse and feels guilty about her moment of weakness and ably portrays that.

Esha Gupta as Preeti Makhija, Prem Makhija's sister, adds nothing to her character except her constant pout with her red lips and the swagger of a rich, spoilt snob.

Kumud Mishra as Erach Billimoria, the editor of the tabloid, The truth is brilliant and adds the right dose of humour to the film.

Sachin Khedekar as the Public Prosecutor, Kangani, is stereotypical and Pavan Malhotra as the Investigating Officer, Vincent Lobo, delivers a nuanced performance.

Though the actors perform well, they fail to engage you emotionally, as the scenes are over-dramatised and there is a feeling of watching a courtroom drama being enacted.

Overall, given the subject, "Rustom" could have been more taut and thrilling, but, Akshay Kumar makes it worth watching.