Bollywood star kids Ibrahim Ali Khan and Aarav Kumar were spotted at the Mumbai airport. Check out their pictures!

By: Filmymonkey Team
Updated: 25 May 2019 08:10 PM
HIGHLIGHTS
New Delhi: Saif Ali Khan and Amrita Singh’s son Ibrahim Ali Khan and Akshay Kumar’s son Aarav Kumar and Twinkle Khanna were snapped by the paparazzi at the Mumbai airport on Saturday (May 25). The two star kids, who share a close bond, greeted each other and they were seen having a conversation.

Twinkle, who was dressed in casual wear, also hugged Ibrahim and she was spotted leaving the airport with her son Aarav. The columnist wore a white and blue stripped off-shoulder top and ripped denims. Aarav looked stylish in his black t-shirt and ripped black denim jeans.

Check out the video!

Aarav has moved to London for his higher education and not many know that the 16-year-old has a first-degree black belt in judo. He is a fitness freak just like his father.

Meanwhile Ibrahim Ali Khan was seen in a denim jacket and red t-shirt at the Mumbai airport. Check out his picture!

Seeing Aarav and Ibrahim together reminded fans of ‘Main Khiladi Tu Anari’. Akshay Kumar and Saif Ali Khan were part of the film which released in 1994. 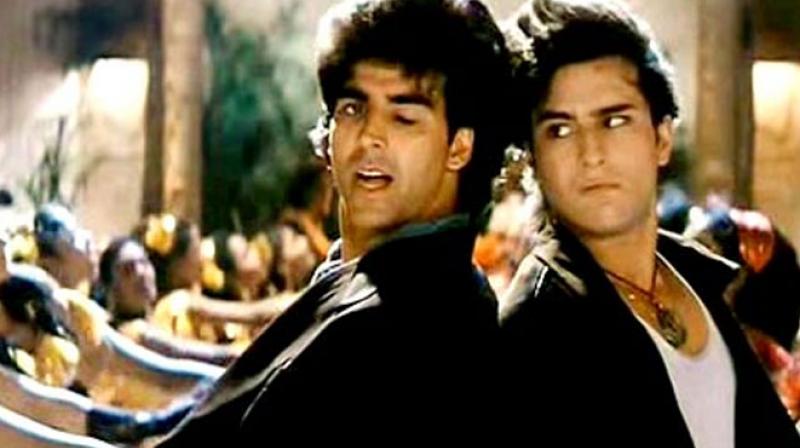 Ibrahim’s sister Sara Ali Khan made her big Bollywood debut with ‘Kedarnath’ opposite Sushant Singh Rajput last year. Gossip mills were buzzing with the rumours that the 18-year-old might join the industry after completing his studies in London.

Talking about Aarav, his father Akshay Kumar had squashed the rumours of his debut in Hindi cinema last year in an interview. The ‘Housefull 4’ actor had said that Aarav is way too young to become an actor.