Shahid Kapoor was accompanied by wife Mira Rajput for the unveiling of his first ever wax figure at Madame Tussauds, Singpore but did not take son Zain and daughter Misha Kapoor to the event and here's the reason!

By: Shruti Srivastava
Updated: 16 May 2019 01:15 PM
The 'Kabir Singh' actor Shahid Kapoor along with his beautiful wife Mira Rajput and children, daughter Misha and son Zain Kapoor made a splashing entry at the Mumbai airport when he flew to Singapore for the unveiling of his first wax figure at Madame Tussauds museum in Singapore. The 'Sasha' fans were waiting eagerly to catch a glimpse of the wax statue of their fav star and finally the pictures are here.

Just a while ago, taking to his Instagram page, Shahid posted a picture posing beside his wax figure and captioned it- "#twinning".

He posted two more pictures of him with his wax avatar, in one of which he is seen touching the statue's head trying to 'fix' it's hair and his funny caption over it reads - "Baal sambhal munna". 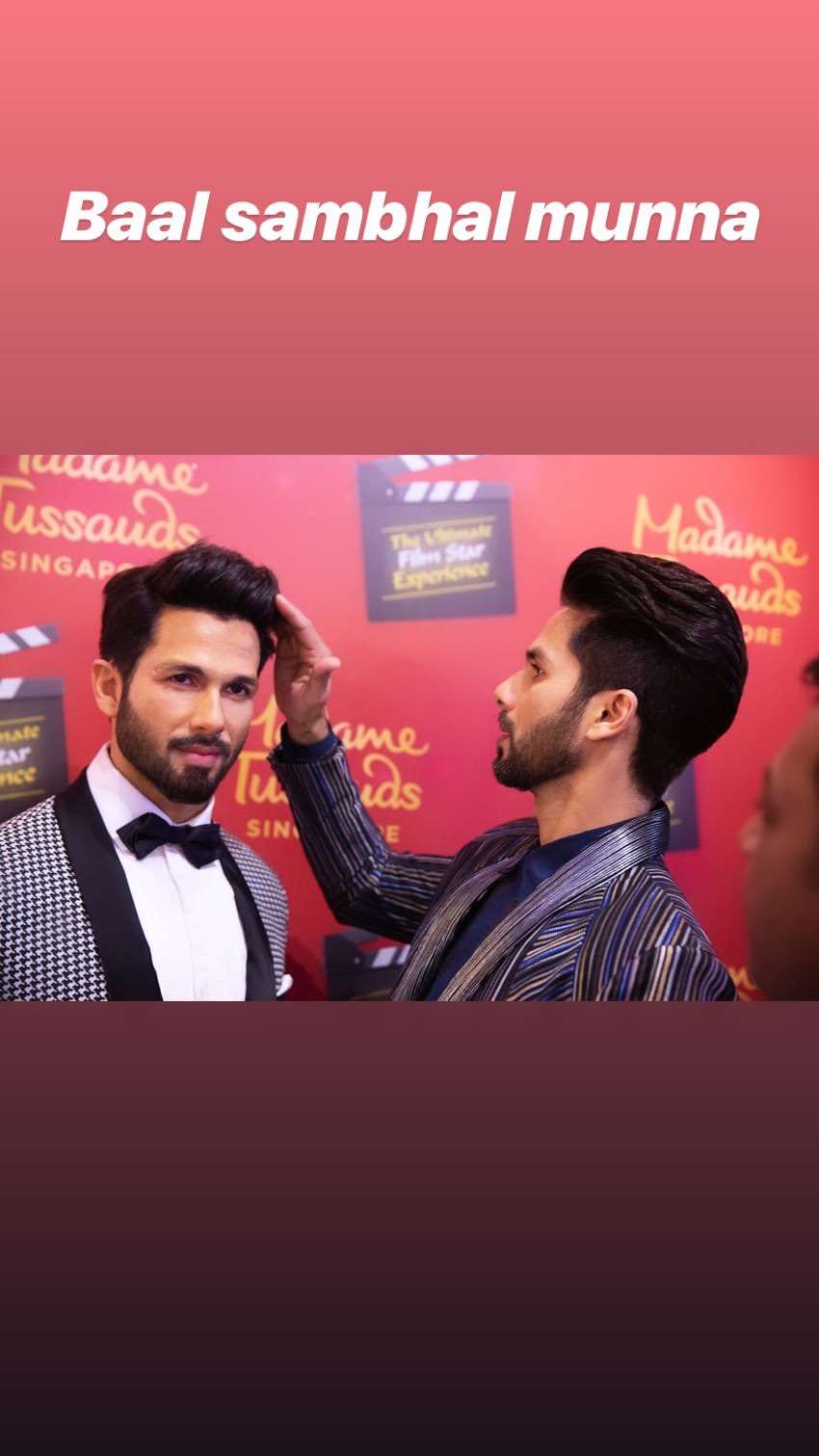 The 38-year-old actor looking dapper in his pinstriped blue suit, pairing it with a black shirt with matching pants and jacket, is seen clicking a selfie in another picture he posted with his wax figurine at Madame Tussauds unveiling in Singapore 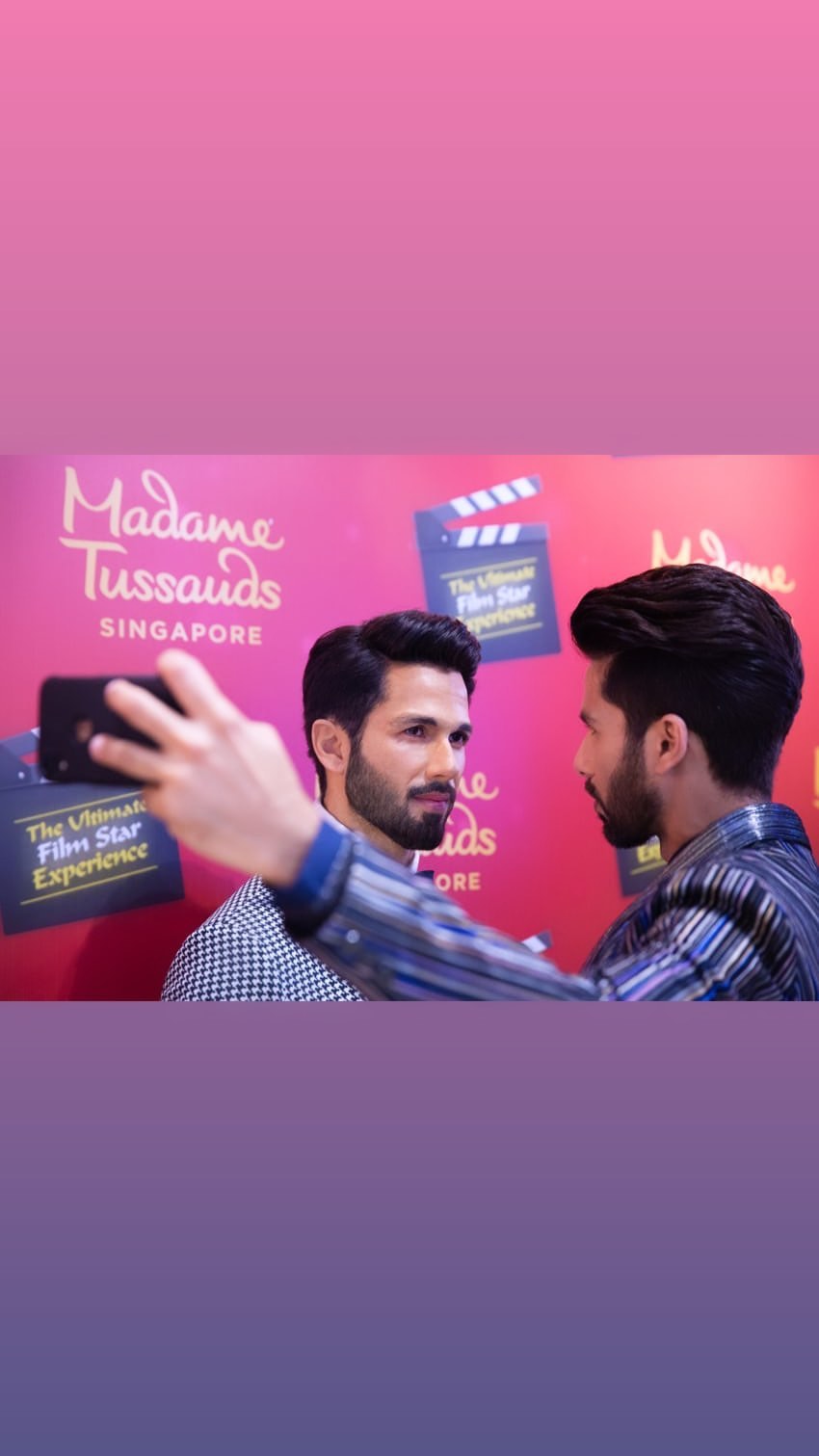 The wax figure looks amazing and the congratulatory messages with the praise for the statue have already started pouring in. Actor Rohit Roy reacts to it saying - "Woaaaah!! This is the closest I’ve seen a wax image! I swear I can’t make out which one is the real you".

The fans are also commenting..

"Which one is real?"

Although Shahid has the whole family,  his wife and two kids in Singapore with him but the actor had shared earlier in an interview that the children won't be accompanying him for the uveiling- "Everyone including my wife, in-laws, as well as my parents. They all had a big smile on their face when they learnt about it. They were like, ‘oh, it’s great’. All of them had a genuine reaction of happiness and surprise. As for Misha and Zain, we don’t plan to take them for the unveiling of the statue. Otherwise they may think, ‘wow, what just happened?’ as it could be a traumatic experience for them to see two dads (laughs). So, only Mira will join me."

Here are some more pictures and videos from the unveiling of Shahid Kapoor's wax statue at Madame Tussauds, Singaore:

The figure was unveiled amid Bollywood singing-dancing with a crew of dancers shaking legs to his 'Kameeney' song 'raat ki matki tode, koi good luck nikaale'.

Shahid Kapoor's next 'Kabir Singh' which is the hindi remake of Telugu hit film 'Arjun Reddy', will release on June 21st next month. The trailer of 'Kabir Singh' was released early this week.