By: ANI
Updated: 28 Jun 2019 03:56 PM
New Delhi: Actor Shah Rukh Khan who has been roped into voice Mufasa for the Hindi version of Disney's 'The Lion King' has shared a new teaser where he can be heard as Mufasa for the very first time! The one-minute fourteen-second teaser begins with Mufasa telling Simba that he will always be with him. "Simba, I am always with you and will always be there for you."

"Just remember, Who are you? A true king!"

Delighted to be a part of this global legacy. In Cinemas 19th July. Yaad Rakhna. #TheLionKing @disneyfilmindia https://t.co/T2OfU4JspC

Teaching Simba how a true king should be, He says, "Often, common people think what they can get. But a true king thinks what he can give."

The teaser ends with Mufasa telling his son, "Simba always remember who you are. One true king! Remember! Besides Bollywood's favourite father-son duo Shah Rukh and Aryan Khan, who will dub for Simba, other big names are Ashish Vidyarthi who will be the voice behind Scar's character, Shreyas Talpade will give lend his voice to Timon, Sanjay Mishra will voice Pumbaa and veteran actor Govardhan Asrani will dub for Zazu.

The teaser is receiving a lot of love, particularly from the SRKians and they are eagerly now waiting to hear what his son Aryan Khan sounds like as 'Simba' in 'The Lion King'. 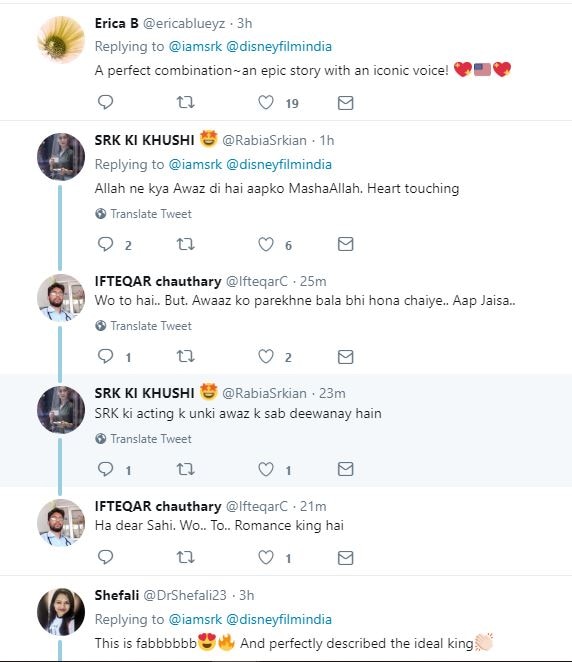 The animated classic's trailer features our favourite characters in new avatars while keeping the essence of the classic alive.

From the trailer, it seems like the upcoming film is a shot-by-shot remake of the 1994 animated film.

Ready for the match with the spirit of #FathersDay. Go India Go!! pic.twitter.com/o09xLTq5d3

With the screenplay written by Jeff Nathanson and songs by legends like Elton John and Time Rice, the movie is helmed by Jon Favreau.

The film will hit the theatres on July 19 and will release in English, Hindi, Tamil, and Telugu. (ANI)